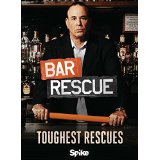 “When you have a formula, you work it. You work it to death.”

Cue obnoxious New York bar expert who reminds me of a Mafia hit man, insert a cute mixologist, an experienced chef, and four different sets of confrontational failing bar owners being gifted with five days with Jon Taffer and his longevity in the industry, experience with over 800 bars, and you have Bar Rescue – Toughest Rescues.

I watched the first episode with baited breath, praying there would be something different besides a whiny bar owner (or two) losing money, needing the miracle that is Taffer, and in heated exchanges, shutting down his every suggestion.

I’m sorry. I’m bored with this. But apparently knowing the success of this long-running docu-reality series, America isn’t.

We have the cameras installed, the undercover visit to bar in question followed by the b*tch session with bar owners, meet the staff, bring in the experts, check out the kitchen, see the menu and staff in action, clean the gunk of bacterial-soup kitchen, retrain (or train) the staff, replace the menu, train the chef, create a specialty drink (blue in two of the four episodes), train the bartenders, remove owner and staff from bar, replace the interior and exterior and rename the bar. Outside have bar owner and employees face away from new bar façade and 1-2-3- turnaround – oh the feels. Close up of new sign, scan of new interior, a couple of product placements, and we’re done.

These owners need to be smacked or thumped in the head. They and their colossal egos are getting free makeovers, and they have the cojones to complain? Taffer serves as family counselor as well as bar professional because these owners can’t get along, don’t trust one another, or any other theatrical ailment to toss into the mix. All I want to say is, grow up.

They need to look in their disgusting kitchens and – I don’t know – clean? I’ll admit – I fast-forwarded through the kitchen scenes because frankly seeing the filth and grime that was behind the scenes in every bar kitchen made me want to throw up…. Much like the chef who tasted contaminated soup that “somehow” managed to get out to a customer and the chef got sick (which means said customer will also get sick) and caused Taffer to curse, shut down the kitchen, and smack plates of food to the floor.

Of course, there are several tidbits of useful information, crucial business strategies that Taffer shares once the bar owners predictably admit the error of their ways and leave the rebranding of their business in Taffer’s more than capable hands.

In particular, I enjoyed the second episode makeover on Bourbon Street that encompassed the rich history of hauntings in that famous or infamous part of the country to rebrand as Spirits on Bourbon Street.  Taffer rechristened a copycat bar to a bar with its own personality and ghostly history (whether real or made up), and the business flourished. Ta da.

I did not, however, appreciate that the men were given black professional long-sleeve name-emblazoned dress shirts and the women were given breast-enhancing bustiers with no corporate branding.

“We do get better tips,” said one female employee.

Here’s a tip. Don’t use boobs to sell booze. It may work, but it only serves to exploit the servers.

Other than that, it is what is – a formulaic successful reality show featuring the four best of the worst. If you’ve got nothing better to do, flip on this Spike TV original and get ready to be appalled and somehow entertained.

50 To 1 The Vatican Exorcisms