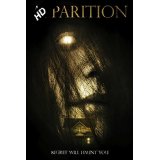 “Too much time alone, you get stuck up in your head. Your brain becomes a maze.”

The most important thing you need to know about Apparition is that it’s not a horror movie. (The second most important thing you should know is that this is a different film from The Apparition, which is one of the worst movies I’ve seen during my three-year stint writing for this site.) Yes, there’s a haunted house, cranky spirits, and an abnormally high number of jump scares. But at its heart, this low-budget thriller is a drama about dealing with the grief of losing a loved one.

The film opens promisingly with a shot of the picturesque farmhouse accompanied by tinkling piano music…that is rudely interrupted by the sickening thuds of a sledgehammer crashing into a wall. (We have to wait until much later to find out what’s inside that wall.)

We then flash back a bit to meet Doug (Jody Quigley), who has just gotten out of the finance business and bought a dilapidated farmhouse in the idyllic countryside. We also see him propose to his girlfriend Lori (Katrina Law). Right about the time you start getting the feeling that things are going *way* too well for Doug, an argument between the couple leads to a car accident and Lori’s death. Doug is obviously devastated, but resolves to finish fixing up the farmhouse they started working on together.

“You? Here? Alone by yourself every day? You’re gonna go nuts!”

Doug is undeterred by earlier warnings from Woody the town crackpot (Thomas Roy) about the house’s troubled, mysterious past. (The house’s jumbled, sordid history involves a Civil War-era widow who gassed young maids from Ireland in the basement, but also a connection to Woody’s own family.) Meanwhile, Doug starts to connect with Jamie (Lili Bordan), a pretty grad student who lives down the road and helps him deal with his loss. Unfortunately, Doug is still troubled by vivid dreams and visions of Lori at very inconvenient times. Are they the result of a disturbed, grief-stricken mind, or are there more malevolent forces at play?

Director Quinn Saunders and screenwriters Pete Cafaro and Andrew Kayros mostly split the difference.  The story is largely presented in a way that leaves the door wide open for a real-world explanation for the demons that haunt Doug.

On the other hand, the filmmakers go so wildly over the top with the horror film conventions that it makes the supernatural aspects impossible to ignore. There are way too many instances of something horrific happening to Doug only to have him jolt awake in bed from a nightmare. Even more blatantly, every scene with Woody recalled the Harbinger in Cabin in the Woods. (Except that here, no one’s laughing at his ridiculousness.) On top of that, the mythology surrounding the house — including some creepy masks that get conspicuous screen time — feels vague and like it didn’t get the filmmakers’ full attention.

As a result, I liked Apparition better when it remained somewhat earthbound. But even these segments of the film probably would’ve been bolstered by stronger performances. Quigley, in particular, comes off as too mopey and ineffectual to carry the film. The mopiness obviously serves him well when Doug is mourning Lori’s loss, but the actor isn’t very convincing when he’s asked to be flirty (or menacing). Law, on the other hand, nicely goes from soft loveliness to threatening coldness whenever Lori’s memory pops up to torment Doug. Bordan is saddled with the most contrived character — Jamie happens to be studying psychology, so she’s especially eager to help Doug cope with Lori’s loss — and isn’t able to do much to stand out.

The final act is an effective gut punch, even if you’ve worked out what’s about to happen. Apparition will likely disappoint horror fans looking for straight-up scares, but is a flawed, intriguing low-budget thriller if you like your relationship dramas with a healthy dose of the supernatural.