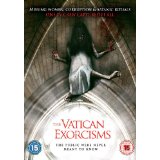 “Have we heard from the devil yet?”

Perhaps we have, given the cunning deception of the DVD’s front cover. I take joy in walking into films relatively blind, only having seen the attention-grabbing image that prompted me to pick it up. Let it be known that the cover of the DVD I received differs greatly from the one that is advertised on Amazon; however, both covers are severely misleading as to what the film actually entails. That being said, knowing absolutely nothing about this film may not be the best way to approach it.

I am a huge fan of exorcism/possession movies. For me, nothing will ever come close to the genre’s popularity in the 70s with films like The Exorcist or The Omen, but even the bad ones are a guilty pleasure for me (The Exorcist II being one of my favorite “bad” exorcism films). Knowing that, it should not be a surprise that I was expecting this to be a bad film, but one with redeeming qualities. While I did not expect it to have many, I was still interested to see if the filmmaker was able to do something new that I had never seen before. He did, but only by fusing the exorcism genre with The Blair Witch Project.

It is one thing for films to be “based on a true story” or to be composed entirely of “found footage,” but this film doesn’t trust its viewers to believe in it. Were you aware that this film is a documentary? No? Well if you weren’t, don’t worry: the film reminds you at least three times through intertitles. I am always willing to suspend my disbelief for films like this, so it is rather insulting when I am asked to do so multiple times. In addition to the film’s incessant need to remind you that “this is real,” it also follows a rather annoying pattern: Joe and his crew are invited to film an exorcism, they film the exorcism, then Father Luigi tells them to stop filming and chases them away. Given those repetitions, it is very easy to lose patience with the film.

Returning to my introductory thoughts, whatever disturbing/scary image you see on the front or back cover of the DVD case does not appear in the actual film. The most you are given is a man who is able to twist his body into seemingly impossible positions during the final exorcism. Though I have seen that in exorcism films before, I will admit that the way it is shot here makes it my favorite part of the movie.

It is a real bummer to say that this film did not make my list of “favorite bad exorcism films.” It had a lot going for it, in terms of concept: exposing a conspiracy in the Vatican. It also did have some rather creepy, well-constructed exorcism scenes. In the long run, however, there was just too much that took me as far away from the film as possible. My advice would be to enter the movie after having read an online synopsis to try to alleviate the disappointment you will receive from just looking at the front cover.