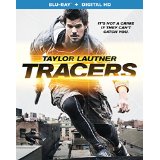 “It’s like being kids again. The streets are our playground.”

The above quote refers to parkour, the art and discipline of moving through urban spaces that was popularized in France. French practitioners of parkour are called “traceurs,” which gives this totally clichéd, consistently ridiculous, but occasionally breathtaking action flick its title. You’ve seen the plot before (many times), but Tracers still vaults itself above the straight-to-DVD pack thanks to its freewheeling free-running sequences.

I dare you not to roll your eyes — or at least let out a chuckle — when I describe the plot of Tracers. Cam (Taylor Lautner) is a NYC bike messenger who is struggling to pay off a big-money debt to the Chinese mafia. (I’ve lost you already, haven’t I?) During a bike run one day, he has a literal run-in with a fetching, athletic girl named Nikki (Marie Avgeropoulos) in the action movie version of a meet-cute. The pair eventually reconnects, and Cam learns that Nikki is part of a parkour group along with her older brother Dylan (Rafi Gavron).

“The key is speed and silence; in and out, fast and quiet.”

The parkour crew is led by Miller (Adam Rayner), who allows Cam to join the group after he proves his worthiness (and loyalty). It’s not long before Cam realizes the group doubles as a highly-skilled delivery service of criminal goods. As a result, good-hearted Cam is torn between doing what’s right — and skipping town with the pretty girl — and taking part in one…last…job…in order to pay off his debt to the Chinese.

I don’t know that anyone was expecting Lautner to have the most big-screen longevity after the last movie in The Twilight Saga came out in 2012. But this fall into straight-to-DVD action fare still feels pretty swift. That being said, Tracers actually plays quite well into his strengths as a performer, despite the fact that he doesn’t go shirtless until the 51-minute mark. Like Keanu Reeves in anything The Matrix, Lautner’s blankness actually makes him an effective entry point into a subculture that is foreign to most people. (In Tracers, that’s obviously parkour; for Keanu, it’s been the Matrix, surfing/bank robbing, and high-powered law.)

Of course, Lautner’s best asset is his physicality, which is on full display in this film. Director Daniel Benmayor and cinematographer Nelson Cragg toggle between urgent, hand-held shots that put us right on the heels of the parkour gang, and more static set-ups that allow us to take in the impressive athleticism. (And allow us to see that Lautner actually did a good portion of this stuff himself.) Stunt coordinator Gary Powell has worked on everything from Bond movies — including the thrilling parkour chase in the early part of Casino Royale — to the latest Planet of the Apes movie, and he deserves a lot of the credit for helping stage electric action sequences. The highlight is the climactic chase that puts Cam on the run from a police car and across many NYC neighborhoods.

It’s a good thing too, because the rest of Tracers is basically a mess of tropes and groan-worthy plot points. For example, the movie works overtime to shows Cam is actually a good guy by giving him a friendly relationship with the son of his landlady. (Despite seemingly being several months behind on his rent, even Cam’s landlady likes him.) And the Chinese mafia gets dropped in and out of the story right after we’ve forgotten they’re a part of the plot.

Avgeropoulos makes for a spunky love interest, so I’m not totally sure Nikki needed Cam to rescue her from a life of crime. It’s no spoiler to say Rayner’s Miller winds up being the main antagonist; I wasn’t too impressed with the actor’s lead performance on FX’s Tyrant, but he shows considerably more life tapping into his dark side.

“It’s a profession. We’re not thrill seekers who pull any score that comes along.”

Tracers tosses in a surprisingly effective final-act swerve, and I thought it was smart to stock the gang with teenagers/young adults. They bring an energy and playfulness to the proceedings — especially during a sequence where the crew trains on an abandoned ship — that may have been missing otherwise.

Tracers is presented in an aspect ratio of 2.40:1. The 1080p image is arrived at with an AVC MPEG-4 codec at an average of 29 mbps. The more cinematic aspect ratio is ideal for capturing the full scope of some of the hyper-athletic parkour action. The palette is ever-so-slightly chilly and de-saturated, which is fairly common for films with an urban setting. (Tracers actually filmed in NYC.) Some darkened, nighttime scenes feature nice separation within the black levels, while others have some intermittent aliasing and banding. Nothing too distracting in what is ultimately a solid-if-unspectacular HD presentation from Lionsgate.

The DTS-HD Master Audio 5.1 track is immediately alive with background city noises, including construction equipment and the beep of trucks backing up. These sounds occupy the entire surround sound field, but there is really good separation and directionality with the way noise (like whizzing bullets) travels from the front to the rears. The subs are mostly heard from when the thumping soundtrack kicks in during any chase sequence. And, for what it’s worth, dialogue — perhaps the least important part of this film — is totally clear.

The Art of Motion — The Making of Tracers: (11:13) This “Making Of” is where we learn the film’s title refers to parkour practitioners in France. (Since it’s not mentioned in the actual film.) Stunt coordinator Gary Powell and Lautner’s preparation also get a nice spotlight.

Director’s Pitch Reel: (2:25) Filmmaker Daniel Benmayor directed a stylish, murky clip as an audition of sorts for the Tracers gig. Obviously it worked.

The exciting parkour sequences are easily the best reason to check out this flick, which breezes through its 93-minute running time without reinventing the action movie wheel. Check this one out if you’re feeling burned out on bombastic, CGI-fueled action sequences (and if you don’t mind clunky, cliched storytelling).