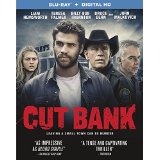 “Welcome to Cut Bank, MT. coldest spot in the nation.”

When you make a darkly comic crime thriller that centers around a bunch of bumbling schemers and a single, righteous cop — and then you name that movie after a frigid, real-life city in the northern part of the U.S. — the comparisons to Fargo are simply impossible to ignore. Thankfully, Cut Bank is buoyed by its own dry, lively cast of characters who are brought to life by a nimble set of performers.

We are quickly introduced to the key players of Cut Bank. Dwayne McLaren (Liam Hemsworth) is itching to leave the tiny town and take his wide-eyed girlfriend Cassandra (Teresa Palmer) with him. He’s a mechanic with an ailing dad who works at a garage owned by Cassandra’s stern father Big Stan (Billy Bob Thornton). We also get a quick glimpse of town recluse Derby Milton (Michael Stuhlbarg) puttering around in his cabin. Eventually, we find out Derby is eagerly awaiting a parcel to be delivered. Unfortunately for him, crotchety town mailman George Wits (Bruce Dern) is shot, killed, and collected by a mysterious hooded figure.

It just so happens Dwayne and Cassandra were fooling around with a video camera at the same time and accidentally capture the murder on tape. George’s death — Cut Bank’s first murder — deeply upsets the overwhelmed Sheriff Vogel (John Malkovich). However, Dwayne sees it as an opportunity. The federal government offers a $100,000 reward to anyone who can provide evidence in the death of a U.S. Postal Service employee, which prompts the arrival of a quirky investigator (Oliver Platt). After the reward is approved, Dwayne plans on collecting the money and skipping town.

By the way, everything I just described happens within the first 20 or so minutes of Cut Bank. This section of the film also contains at least two significant swerves that send the movie in surprising directions. (Well, “surprising” directions given that even semi-savvy moviegoers know there’s more to this story than a straightforward murder.) Director Matt Shakman has numerous TV credits to his name — including, coincidentally, two episodes of FX’s excellent adaptation of Fargo — but is making his feature film debut with Cut Bank.

The variety and breadth of his TV work probably helped Shakman in juggling the movie’s tricky tone, which often goes from black comedy to violent thriller in the space of a few moments. The script by Robert Patino is certainly derivative — besides the plot and setting, other Coen-y touches include a mute henchman and a peculiar killer who leaves an Anton Chigurh-like trail of bodies in his wake — but it’s also claustrophobic in a way that plays well with Shakman’s panoramic direction. In other words, the filmmakers make it easier to understand Dwayne’s frustration: how can a place so wide open feel so constricting?

And on a much simpler level, it helps to have a cast full of pros who can really make this stuff sing. Actors like Malkovich (Burn After Reading), Thornton (The Man Who Wasn’t There, the Fargo series), Stuhlbarg (A Serious Man) and Platt (also on the Fargo series) have direct experience with the Coen Bros or its TV descendant. It’s especially refreshing to see Malkovich play an old-fashioned good guy after a long, successful career playing quirky psychopaths (and playing “himself”). Thornton has a few strong moments with Malkovich, but his screen time is relatively limited compared to the authority his Big Stan emanates. In fact, a lot of the action is driven by Stuhlbarg’s creepy hermit, whose menace is intentionally undercut by humor. (“Thought you was dead” is the running joke with his character.) The actor is suitably unsettling to the point that we didn’t need to know that Derby was into taxidermy to know he was crazy. After all, “taxidermy” has been shorthand for “movie psychos” for more than 50 years now.

I’ll admit to making fun of Hemsworth’s wooden acting in the past. And while the tough-guy dialogue doesn’t always sound natural coming out of his mouth, the handsome brooding he specializes in serves him well as Dwayne. Palmer is a pleasant, pure enough presence, but winds up contributing little more than being a token damsel in the distress for the final act.

Naturally, there are some connections and coincidences that are probably a little too convenient. You can chalk some of it up to Cut Bank being the kind of small town — population of about 3,000 — where everyone knows each other. I personally choose to be a little more generous because of little touches in Patino’s script, like making one character smart enough to figure out the main scheme right away. And while I wouldn’t exactly call the ending satisfying, I did like that it was a departure from the way this sort of story usually winds up.

Cut Bank is presented in an aspect ratio of 2.40:1. The 1080p image is arrived at with an AVC MPEG-4 codec at an average of 24 mbps. The wider, more cinematic aspect ratio used by Shakman and cinematographer Ben Richardson evoke the big screen Westerns they’re channeling. The film also eschewed digital cameras in favor of 2-perf, 35mm film, which gives the image a pleasing, rich grain that befits the gritty subject matter and dusty small-town setting. I spotted a few instances of aliasing — mostly during darker scenes — but black levels are otherwise properly inky with strong, defined separation. However, the most impressive visual moment comes early on: the murder occurs along a resplendently yellow field of canola flowers, which is brought to eye-popping life on this Lionsgate Blu-ray. The versatility that comes with being able to convey both grit and beauty make this an exceptional presentation overall.

The DTS-HD Master Audio 5.1 track is highlighted by the subtle immersion that puts you right in Cut Bank along with the rest of the characters. (Or at least Edmonton, which is where the movie was actually filmed.) Not only do we get the customary background noises for exterior scenes, but the surround sound field is also active with subtler ambient sounds during indoor scenes. (Usually, the sounds of the outside world don’t encroach on the action during interior sequences.) Anyway, dialogue is clear and balanced quite well with the rest of the track. The subs are heard from when a thunderstorm approaches or to punctuate the sound of a revving engine.

Audio Commentary with director Matt Shakman and writer Robert Patino: A thoughtful, revealing track that covers the project’s genesis (it took five years from the time Shakman read Patino’s script until the start of filming) and production (a 28-day shoot in Edmonton). It was interesting having the film’s writer and director discuss the reasons behind certain things that were in the script not making it to the screen. Shakman also seemed very willing to collaborate with his cast, which included allowing Stuhlbarg to help craft his creepy character’s look.

Bad Karma: Life in Cut Bank: (18:52) Cast and crew talk about the story’s themes — a “classic American story” about bettering one’s lot in life — and dealing with all the tricky tonal shifts. (Humor, tension, drama.) It also turns out several cast members (Malkovich, Dern) had prior personal connections to the real-life Cut Bank.

Deleted Scenes: (3:36) Three quick scenes, two of which consist of more Hemsworth brooding. The only one worth watching gives Thornton more screen time, as Big Stan warns his daughter about Dwayne. Features a Play All option

Extended Scenes: (2:03) Two quick chapters here, with the best being a longer — and more brutal — version of Derby’s assault on a bartender. Features a Play All option.

It would be a mistake to totally dismiss Cut Bank as Fargo-lite.

I mean, it’s not an inaccurate assessment. But this is also a funny, engaging crime thriller in its own right. Cut Bank will likely keep you entertained if you enjoy modern Westerns and gallows humor. (And you’ll especially like it if you enjoy those two things put together.)

Major Crimes: Season 3 Where Was God? Stories of Hope After the Storm