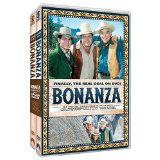 Three-time widower Ben Cartwright  (Greene) runs his famous Ponderosa Ranch with the aid of his three grown sons from three different mothers. There’s Little Joe (Landon), Adam (Roberts) and Hoss (Blocker). Set some time in the mid 1800’s, this long-running series followed the family’s many exploits. In the late 1950’s, westerns accounted for six of the top ten programs on TV. Only Gunsmoke had a longer run than Bonanza. From 1959 to 1973, Ben Cartwright and his boys rode across the small screen. Years later in syndication the series re-emerged as Ponderosa, and a handful of TV movies continued the tale into the 90’s.We never have grown tired of the genre that gave us such heroes as John Wayne and Clint Eastwood.

Season 8 would be the first without Pernell Roberts as Adam. This is also where we cross the halfway mark to getting the complete series in our collections. The season begins with Something Hurt, Something Wild. A local patriarch starts a feud with the Cartwrights over a made-up story that Joe assaulted his daughter. What is really behind the elaborate frame-job? When Ben puts together a championship horse race for a friend, he discovers the fix is in. Now he has to try to even the odds without making too much noise in Horse Of A Different Hue. Hoss is ready to get hitched in To Bloom For Thee, that is until Ben asks some rather uncomfortable questions about the bride’s past. It’s another one of those Cartwright near Mrs. Joe goes undercover trying to convince a man who is out to kill Ben into changing his mind in The Oath. Michael Landon does some singing in this episode. Joe and Hoss start to breed rabbits in Ponderosa Explosion. They think the skins will bring them a small fortune. There’s only one problem: neither one of them is able to actually kill the cute bunnies, and soon they are everywhere. Hoss is part of a jury that sentences a man to hang in Justice. After the execution, he discovers that they may have convicted the wrong man. The show has one of its lightest moments in Joe Cartwright, Detective. Joe is enjoying a mystery story so much that he begins to imagine himself as a famous Scotland Yard detective. Of course, things aren’t always as easy as they look in the dime novels. Hoss gets a violin and a fortune-teller’s prediction that he’s a natural musician in Maestro Hoss. Now he has a concert date, and a natural he isn’t. You might want to turn the volume way down on this one. It’ll hurt your ears, for sure.

CBS is starting to reward fans with more and more features in these sets. It’s still released in half seasons, but you can buy them together in a special value pack. I can’t image anyone just buying half of a season. The extras on these two sets include the “lost” short film Ponderosa Caravan. It was a promotional film that traveled the country with a Ponderosa exhibit. You get a 1978 interview with William Whitney. There are vintage commercials and behind-the-scenes stills. A couple of commentary tracks round out the extras here. It’s quite a haul for this kind of release. Of course, it’s still taking forever to get these episodes to us. “Oh, you’d have died of a real bad case of slow.”

Gino Sassani is a member of the Southeastern Film Critic's Association (SEFCA). He is a film and television critic based in Tampa, Florida. He's also the Senior Editor here at Upcomingdiscs. Gino started reviewing films in the early 1990's as a segment of his local television show Focus. He's an award-winning recording artist for Omega Records. Gino is currently working on his 8th album Merchants & Mercenaries. Gino took over Upcomingdiscs Dec 1, 2008. He works out of a home theater he calls The Reel World. Favorite films: The Godfather, The Godfather Part II, The Body Snatcher (Val Lewton film with Karloff and Lugosi, not the pod people film), Unforgiven, Gladiator, The Lion King, Jaws, Son Of Frankenstein, The Good, The Bad And The Ugly, and Monsters, Inc.
Rogue: Complete Second Season Justified: The Complete Final Season