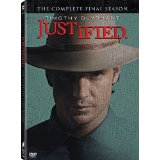 “Man, you are everything I’d hoped for…right down to the hat.”

For six stellar seasons, Justified went about its business in a manner similar to that of its slyly laconic, incorruptible hero Raylan Givens. The key word in that last sentence is “hero.” Justified premiered in the midst of the supposed new Golden Age of Television, which was largely defined by antiheroes like Tony Soprano, Dexter Morgan, and Walter White. Another one of those antiheroes — Mad Men’s Don Draper — recently signed off with a lot more fanfare than Justified got for its excellent last hurrah.

“This is one of them classic stories where the hero gets his man and then rides off into the sunset.”

Before you get bent out of shape about spoilers, you should know those words are spoken in Ep. 8 (“Dark as a Dungeon”) out of 13 in this sixth and final season. Since we’ve never gotten the chance to write about this show here at UpcomingDiscs, I’ll offer the quickest of primers. Deputy U.S. Marshal Raylan Givens (Timothy Olyphant) was a shoot-first/ask-questions-after-you’ve-shot-a-few-more-times lawman who was reassigned to his home state of Kentucky after his (justified) quick-draw ways got him in trouble with the Miami mob. Raylan spends most of his time in his childhood home of Harlan County. He was reunited with high school sweetheart Ava Crowder (Joelle Carter), who married into a local crime family that also included loquacious crook Boyd Crowder (Walton Goggins). Raylan and Boyd were childhood friends (“We dug coal together”) who had a fateful clash at the end of the series’ first episode. (The Emmy-nominated Goggins was originally intended to be a one-off guest star for the pilot, but the show’s producers decided to keep him around for the long haul because he’s so damn good as Boyd.)

“Getting Boyd Crowder is job number one.”

The deeply complex relationships between those three characters serve as the basis for the final season of Justified. Boyd and Ava are reunited after her rough stint in prison partly due to his criminal machinations. Unbeknownst(?) to Boyd, Ava has been let out of prison because she has agreed to work as an informant for Raylan, who is determined to bust Boyd once and for all before metaphorically riding off into the literal sunset of Florida to help raise his daughter with ex-wife Winona (Natalie Zea). Meanwhile, Boyd is back to his old bank-robbing/safe-cracking ways on behalf of Katherine Hale (guest star Mary Steenburgen), the widow of a former crook and a formidable criminal player in her own right. Katherine also has ties to Avery Markham (guest star Sam Elliott), a gangster looking to buy up as much land as he can in Harlan — by any means necessary — so he can grow weed once it’s legalized in Kentucky.

Of course, those are just the broad strokes of the show’s final season, which also includes return appearances from many of Justified’s most memorable recurring characters. I was especially pleased to see Kaitlyn Dever’s hardened teenage survivor Loretta McCready — first seen in the show’s exceptional second season —resurface for multiple episodes. And for comedy’s sake, it’s hard to top Jeremy Davies as professional scumbag Dickie Bennett (the role won Davies a Guest Star Emmy a few years back) or Patton Oswalt’s (over)eager-to-help Constable Bob. On the other hand, a fan-favorite character who had previously proven to be slippery and mildly un-killable finds himself at the wrong end of a gun barrel by the end of the season premiere/“Fate’s Right Hand.” Meanwhile, Ep. 11/“Fugitive Number One” features a brutal, bloody fight to death inside the RV of eccentric criminal operator Wynn Duffy (the remarkable, reptilian Jere Burns).

That mixture of comedy and violence is emblematic of the show’s creative godfather, the late, great writer Elmore Leonard. Justified is based on the Leonard short story “Fire in the Hole.” In turn, the writer’s last novel (2012’s “Raylan”) was inspired by the TV show. Leonard is best known for writing novels like “Get Shorty”, “Out of Sight”, and “Rum Punch” — along with their corresponding movie adaptations — but the 78 hours in Justified’s run will likely go down as the crowning achievement in Leonard’s career. (Olyphant and Leonard, in their roles as producers, routinely bounced ideas off each other up to the writer’s death in 2013.)  A lot of the credit goes to showrunner Graham Yost and his team of excellent writers/producers who crafted a classic modern Western and perfectly captured the essence of Leonard’s style. (Season 6’s dim-witted henchman Choo-Choo (Duke Davis Roberts) — “When I hit you, it comes hard and fast…like a choo-choo train” — is a perfectly Elmore Leonard-esque creation.)

Other notable season 6 newcomers include Elliot’s Avery Markham (seems impossible it took this long to get Sam Freakin’ Elliott on *this* show); Ty Walker, the chatty Markham underling played by Garrett Dillahunt; and Boon, the uber-creepy, gun-happy Markham underling played by Jonathan Tucker. The series finale (“The Promise”) gives us a good ol’ fashioned quick draw contest filmed like an old Western.

“The Promise” also offers a bittersweet, thoroughly satisfying conclusion to the Raylan/Boyd/Ava saga. Raylan, in particular, is so cool that you could be fooled into thinking Olyphant isn’t doing as much as his co-stars. (Or as much as TV’s other Difficult Men.) The actor, however, is expertly controlled as Raylan constantly has to juggle whether it’s more appropriate to shoot a bad guy or chuckle at him. Goggins had the showiest part and still managed to elevate it; he proved a perfect, grandiose foil to Raylan’s stubborn straightforwardness. Raylan and Boyd are one of the best frenemy duos I’ve seen on TV, and the finale absolutely gives them their due.

Carter — as imperiled, resourceful Ava — is also wonderful in this final season. Throughout Justified’s run, Ava subverted unflattering archetypes (victim, kingpin’s girlfriend) that would’ve tripped up a lesser show. And Carter’s sympathetic, forceful performance went a long way toward elevating Ava and helping the character earn her spot alongside the show’s two big boys. If there’s one minor shortcoming in this final season, it’s that Raylan’s work family takes more of a backseat than usual. Art Mullen (Nick Searcy), Raylan’s retired old boss/father figure, doesn’t really spring into action until after the season’s halfway point. I also don’t think the show fully took advantage of the fact that Raylan’s colleague-turned-chief Rachel Brooks (Erica Tazel) was his new boss. Then again, I always felt Brooks and Jacob Pitts’ Deputy Marshal Tim Gutterson were perpetually underused. (At least Pitts knew how to squeeze every last drop out of Tim’s wry one-liners.)

Justified: The Final Season features all 13 episodes on three discs. The only special feature is a “Hollywood to Harlan” featurette on Disc 3 in which a few of the show’s writers/producers take a field trip to Harlan and tour a coal mine. This DVD set also includes “uncensored” versions of the episodes that aired on FX, but Justified never relied on foul language or gratuitous sexuality to make its point, so the difference is pretty negligible.

These final 13 episodes make for a terrific season of Justified — I still rank it behind the Bennett family saga of season 2, and no single episode here is better than the season 1 finale “Bulletville — but they make for an even better final season to a fantastic show. I love Justified — the fantasy football team that was finally able to win me a title was called the “Harlan Marshals” — and I already miss its low-key excellence. “As you undertake your grievin’, may that guide you as you contemplate your next move.”