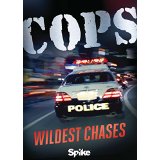 There are some television series that just have a catchy theme song; COPS is one of those shows. I don’t know what it is, but every time I hear mention of the show, I automatically hear the theme song in my head. I know I can’t be alone in that category; come on, show of hands, how many people hear the theme song in their head or feel compelled to sing it out loud at the mere mention of the show? Yes, yes, I am aware I can’t see any of you; just a bit of fun. So my latest title, COPS Wildest Chases by definition is supposed to deliver the wildest, craziest, most insane chases of one the longest running reality television series in history. On that score, I must admit my disappointment, as the chases that I witnessed in no way lived up to that hype.

So going in I was anticipating a bunch of wild car chases on freeways and interstates culminating in carnage from vehicle wipeouts; what I got was mainly foot chases that in truth didn’t last long. I am aware of the dangerous precedent set by assuming; however, when something is titled Wildest Chases, it should be safe to assume that you can expect at the very least a couple of death-defying stunts, right? I suppose on the one hand this can allow certain people to sleep well at night, because these chases illustrate how good law enforcement is at catching their perpetrators, or how unskillful your usual  perpetrators are at getting away (either should provide some level of comfort).

However, the disc does have a saving grace. I may not have been treated to death-defying stunts, but I was treated to some of the most ridiculous excuses people come up with when they are caught by the police. Like in one case when a couple was arrested for firing shots at a home, despite knowing that people witnessed them do it, and even though they are pulled over with the weapon and an obscene amount of drugs in the vehicle, they attempt to claim that they didn’t do it and give an alibi with more holes than Swiss cheese. It is mind-boggling the things people attempt to get away with.

In conclusion, if you are seeking thrilling chase that end in a fiery blaze (unrealistic, I know), this may not be the disc for you. However, if you want to see the ridiculous excuses people give for why they are running from the police or why an item used during the commission of a crime is in their possession , this disc is chalk full of that. Also there is one guy on here who I don’t know what he was taking, but given the effects it had on him, I will be sure to avoid it at all costs.

Jeremy Butler is a film school graduate of the International Academy of Design and Technology. He is been writing for Upcomingdiscs since 2012; however, movies have played a big part of his life for much longer. Favorite genres include horror, science fiction/fantasy, and comedy. Favorite movies are V for Vendetta, Boondocks Saints, Kiss Kiss Bang Bang, and The Godfather.
Justified: The Complete Final Season Jupiter Ascending (Blu-ray 3D)