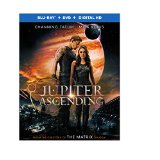 “To live is to consume.”

Sometimes it feels like we’ve already consumed every conceivable type of Hollywood blockbuster. Besides movies adapted from comic books or, um, older movies, we’ve gotten mega-budget films based on board games and theme park rides. And that’s why I was so excited and intrigued by Jupiter Ascending, especially when The Wachowskis’ nutso space opera was slated to hit theaters during what seemed like a particularly sequel-heavy summer of 2014. The movie, in theory, represented a wholly original vision. Instead, the messy, unnecessarily dense Jupiter Ascending is Star Wars. It’s also The Matrix, The Princess Diaries, Flash Gordon, and even a little Soylent Green.

To be fair, that insane-sounding mishmash of movies absolutely holds more appeal to certain moviegoers than yet another three-hour Michael Bay/Transformers opus. And as someone who watches WAAAAY more films than the average person, I include myself in that group. My movie antennae perk up whenever something bold or new hits the block, especially when it’s made by filmmakers with the boundless resources and creativity of the Wachowskis. It’s why I’m a fierce defender of Cloud Atlas; even though the film was based on a best-selling book and not technically an original work, the Wachowskis put something on screen that didn’t really look or feel like any other movie that had come before it.

“We can’t name a child after a planet.”

Try telling that to the Wachowskis. Mila Kunis stars as Jupiter Jones, the world’s most stunning cleaning lady. The star-crossed Jupiter, who scrubs toilets alongside her Russian immigrant family, has always had the feeling that she was destined for greater things. That hunch pays off when she crosses paths with Caine Wise (Channing Tatum), a genetically-altered, ex-military hunter. Caine is also a “lycanton”, which means he has both wolf and human DNA. He informs Jupiter that her genetic signature makes her interplanetary royalty, and that she is the rightful heir to Earth.

You see, Earth is merely a valuable, life-giving resource to a family of spoiled-rich-kid aliens. The House of Abrasax is one of the universe’s most powerful dynasties, and early on it’s fun watching its three grown children squabble over Earth like it’s a particularly desirable trinket. Balem (Eddie Redmayne) is the eldest Abrasax sibling and wants Earth for himself, which is why he considers Jupiter’s claim on the planet such a threat; Titus (Douglas Booth) hides behind a playboy veneer that masks his true ambitions; and Kalique (Tuppence Middleton) is the most outwardly friendly to Jupiter, but it’s for her own self-serving reasons. Eventually, Jupiter and Caine leave Earth and tangle with each of the Abrasax siblings in order to save Jupiter’s home planet.

The plot is relatively simple space opera that the Wachowskis decide to present in the most confounding, momentum-killing way possible. The movie has a cornier, more sanitized feel to its anarchy than any non-Speed Racer Wachowski production, which makes it seem like they might be trying to appeal to younger viewers who will either be lost or bored by the all the intergalactic political jockeying. (Pause for Trade Federation flashbacks.) Even the typical Wachowskian Big Ideas about humanity and destiny get bogged down by the ponderous plot. Jupiter Ascending generally lacks the flair and nimbleness of something like The Fifth Element, partly because it feels like the movie has someone stop what they’re doing and explain what’s happening to Jupiter every 15 minutes or so.

More often than not, that task falls to Tatum. His half-albino character is considered to be genetically deficient, which I’m taking as a sly riff on the fact that Tatum is considered to be one of our more genetically-blessed Earthlings. But despite the moony eyes Caine and Jupiter make at each other, his brooding, damaged protector is more T-800 than Han Solo. He still fares better than Kunis, who has the chops and likability to be an appealing audience surrogate. Instead, when the actress isn’t falling or dangling from something — which feels like 30 percent of her screen time — she’s mostly asked to model some outrageous, show-stopping galactic gowns.

Out of the Abrasax siblings, Booth makes the best impression as the conceited Titus. (Unless you count Middleton’s peekaboo nudity.) Then there’s Redmayne, who swishes around a series of greenscreen sets while delivering all his lines in a raspy whisper…except when he’s YELLING! Let’s just say the performance is not likely to help the actor’s Theory of Everything Oscar chances, and leave it at that. I should also mention that Sean Bean co-stars as a character named Stinger Apini, who has an uneasy relationship with Caine. You’ll have to see for yourself whether Stinger will join an updated version of this classic YouTube video.

Jupiter Ascending does have some inspired moments of world-building, including the instantly immortal line “bees are genetically designed to recognize royalty.” (Of course they are!) There’s also a thoroughly amusing bureaucratic detour when Jupiter has to make her royal claim that shouts out to Terry Gilliam’s Brazil and features a cameo by Gilliam himself. On top of that, every bit of Jupiter Ascending‘s reported $176 million budget is visible on the screen. (That’s right…the oddly specific budget figure being reported is $176 million because, um, Wachowskis!) During action sequences, Caine frequently busts out a pair of anti-gravity boots that probably seemed cool in theory, but have the unfortunate side effect of making him look like Frozone from The Incredibles. (I say it’s “unfortunate” unless the Wachowskis *wanted* their hunky hero to look like a cartoon character.)

I was more impressed by the extraterrestrial battles set against earthbound backdrops — downtown Chicago, a cornfield near Stinger’s house — than I was when the action moves to outer space. There’s also a multi-racial team of bounty hunters, lizard people in leather trench coats, and I’m fairly sure I saw an elephant co-piloting a spaceship.

Jupiter Ascending is presented in an aspect ratio of 2.40:1. The high-definition 3D image is arrived at using the standard duel MVC codec at an average 23/13 mbps. Say what you might about the film, but this high-definition 3D image presentation is nothing short of spectacular. The digital world blends seamlessly with the live-action material. There is a wealth of texture and detail that allows you to discover something new with each viewing. The 3D field adds wonderful depth to the image. There is a particular scene that shows Jupiter with a few orbiting moons. It’s a perfect example of the 3D presentation. Colors pop with vibrancy. Costumes are particularly colorful and also provide more of that nice texture to the image. Black levels are incredibly black with layer upon layer of shadow definition. This is absolutely an immersive experience that works as a show-off piece for your system.

The Atmos 7.1 pretty much translates to a Dolby Digital TrueHD 7.1 track on most systems. The audio presentation is just as dynamic as the video. The surrounds are almost always alive with subtle sounds as well as full-on score riffs and the kind of whirls and whines you get in a Transformers film. It’s a busy sound field that will surround you in a truly immersive environment. Dialog breaks through the sound perfectly. The sub levels will offer plenty of room-shaking moments. They also work hand in hand with the rest of the surround channels to add a depth and fullness to the entire production.

The 3D version has its own disc. The extras can be found on the Blu-ray standard 2D version. There is a DVD and digital copy as well. The extras offer some nice behind-the-scenes moments, but they are all quite brief.

Jupiter Jones – Destiny Is Within Us: (6:53) Mila Kunis leads the cast and crew on a profile of the character.

Caine Wise – Interplanetary Warrior: (5:15) This time it’s the Caine character that gets profiled.

The Wachowskis – Minds Over Matter: (7:25) This is very much a love-fest piece on the siblings. There is some nice behind-the-scenes footage to be found here, to be sure. The cast and crew bits are all about how wonderful the duo is. We get it.

Worlds Within Worlds Within Worlds: (9:36) This is the most informative piece. Here we get a look at many aspects of the production design. There’s conceptual art and plenty of nice peeks at how these worlds and ships were put together. In case you didn’t catch it the last 10 minutes, everyone reminds you how wonderful the siblings are. Just in case you didn’t quite get it.

Bullet Time Evolved: (9:35) This feature focuses on the stunts and action work on the film. We get a look at the training and choreography of some of the better action sequences. Of course, the title refers to The Matrix, where the siblings first developed many of their techniques.

From Earth To Jupiter (And Everywhere In Between): (9:34) This one is a kind of wrap-up that examines story elements and the fairy-tale quality of the material.

Obviously, the Wachowskis have a grand plan for the universe they’ve concocted for Jupiter Ascending. (For example, I’m confident we’d see/learn more about Jupiter’s astro-enthusiast father, briefly played by James D’Arcy.) But planning on having multiple movies to tell your entire story is putting the cart before the horse. And counting on a movie like Jupiter Ascending — whose main appeal is its singular originality — to spawn a lucrative franchise for a major studio simply feels like a karmic misstep.