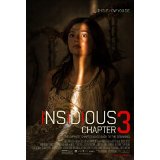 “If you call out to one of the dead, all of them can hear you.”

This lesson is very familiar to anyone who has seen either of the first two Insidious films, a pair of old-fashioned (no sex, no gore), highly-profitable chillers. Of course, a potential problem for this third installment was that the characters in these movies really should have learned that lesson by now too. The makers of Insidious: Chapter 3 smartly sidestep that issue by turning back the clock on the franchise. I just wish the rest of the film had more of that ingenuity and fewer blatant, unearned jump scares.

“A few years before the Lambert haunting…”

This time, the poor haunted souls are the harried Brenner family. Teenage Quinn (Stefanie Scott) is an aspiring actress who can’t wait to go to college and put some distance between her and overwhelmed dad Sean (Dermot Mulroney). Ever since the death of her mom, Quinn has been the one raising her younger brother Alex (Tate Berney), and it’s wearing her down. We actually meet Quinn on the day she decides to visit a psychic in an effort to communicate with her dearly departed mom.

Insidious fans, of course, are very well acquainted with that psychic. But the Elise Rainier (Lin Shaye) Quinn meets in Chapter 3 isn’t the self-assured, take-charge medium who strode into the Lambert home. This version of Elise has given up doing psychic readings because of the toll venturing into The Further — a plane of existence occupied by tortured souls — has taken. Elise is also wary of a particularly nasty (and familiar) spirit that resides in The Further and has vowed to kill her. Quinn convinces Elise to give her a quick reading, but it’s long enough to do some serious damage: a wheezy spirit known as The Man Who Can’t Breathe (Michael Reid MacKay) has attached itself to Quinn and threatens to consumer her body and soul.

The first two Insidious films were directed by James Wan (Saw, The Conjuring), who has moved on to bigger and better more expensive things. (Wan hasn’t completely left his horror roots behind; he’s a producer on Chapter 3 and cameos as a theater director.) To replace Wan, the Insidious team decided to keep things in-house. Leigh Whannell — who wrote the previous two films — pulls double duty here as Chapter 3‘s writer-director. (He also reprises his role as Specs alongside Angus Sampson’s Tucker, and we get to see how a sloppier version of the goofy ghostbusting pair first crossed paths with Elise.)

Whannell, who also wrote Saw, certainly knows his way around the material. But his best asset here is Shaye. Elise isn’t the center of the film, but the veteran character actress gets heftier emotional material to play than what we’re used to seeing in horror movies. (Especially ones with 3 in the title.) Shaye is so good, I wish she was in Chapter 3 even more; it’s no wonder the filmmakers keep finding ways to revive this character.

Scott makes for a likable enough protagonist, but she doesn’t do much to transcend — or even elevate — the typical teenage girl archetype. Mulroney, on the other hand, is consistently amusing with his gruff cluelessness. The movie works better when that cluelessness centers around him being a decent dad than when he’s playing the umpteenth iteration of Skeptical Male in a horror film. Chapter 3 also introduces a group of supporting characters — Quinn’s sarcastic best friend, and the boy down the hall who obviously has a crush on her — but they’re dropped rather unceremoniously for the film’s latter half.

In terms of directorial skills, Whannell does a reasonable facsimile of the visual template established by Wan. (Not to mention the sonic template.Whannell leans just as heavily on his sound department; here, a tinkly bell, creaky/oily footsteps, and labored breathing are each used to ratchet up tension.) Chapter 3 is clearly made by someone who has seen a lot of horror movies and enjoys them a great deal. It’s there in the way the film hovers over jump scares we expect — don’t stick your face under the bed! — but don’t always get. There’s also a pleasing bit of lightness to balance the dour, demonic proceedings. Early on, Quinn is in an accident that significantly immobilizes her; I can’t be the only one who got a chuckle out of the ensuing moment where she’s further restricted following a tussle with The Man Who Can’t Breathe.

Unfortunately, Chapter 3 is also made by someone who doesn’t seem to have anything new or fresh to offer the horror genre the way the original film in this series did. The trips into The Further were always the least interesting part of the Insidious films for me. Whannell does downplay The Further’s blacked-out, haunted house motif from the previous films, but he replaces it with a sub-Shining haunted hallway setting that isn’t much more inspiring. And the final act features a demonic possession/pseudo-exorcism that inevitably pales in comparison to the undisputed champ. The biggest problem, however, is that Whannell is much too reliant on pop-up scares and Joseph Bishara’s now-familiar wailing thriller score to generate jolts. I mean, I could sneak up behind you, yell “Boo!” directly into your ear, and give you a good fright. But it doesn’t mean I’ve done anything artful or particularly impressive.

The good news is Chapter 3 is more focused than the erratic Chapter 2, which ended with a scene that hinted at a different sort of follow-up than the one we got here. Maybe that thread will get picked up for the planned Insidious 4. (Then again, maybe not.) The genuine chills (a faceless, calf-less threat that crawls at Quinn) are outnumbered by the cheap thrills (“Boo!”), but this movie is still made with more care than the typical “Part 3” in a horror franchise.