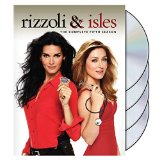 The premise here is dirt simple. They’ve taken the buddy cop idea and found a way to work in the forensics science fad and deliver a procedural with a few twists. Angie Harmon plays Detective Rizzoli. She’s wanted to be a cop all of her life and is living the dream working with a special unit out of Boston PD. Her best friend in life happens to be Dr. Maura Isles, who is the Chief Medical Examiner for the unit and is played by Sasha Alexander. These are the kind of friends who finish each other’s sentences and share a lot of history together. That’s not to say they are at all alike.

Rizzoli is a relative free spirit. She doesn’t let a lot of things get her down and doesn’t take things outside of the job very seriously. But this season she has to deal with severe loss. She ends up having a miscarriage, and the show loses one of its cast members as Detective Cross is killed and Lee Thomas Young leaves the series.

Dr. Isles is a bit of a Bones clone. She has difficulty in social settings at times, and she is an encyclopedia (for those of you under 20, look it up) of information. She has an obsessive need to cite research when confronted with a situation. She has the Spock-like aversion to making a guess or speculation of any kind. There’s a little of Monk’s OCD going on here as well. In spite of the differences, they work well. Each fills in for the other’s deficiencies, and criminals don’t stand a chance against them. She finally finds a guy who isn’t trying to kill her this season.

The detective unit includes Vince Korsak, played by McGyver’s favorite con man Bruce McGill. He’s an easygoing guy here who manages to do the job quietly. He’s very much the heart of the unit and finds himself slowing down. There’s a lot of talk about retirement. He’s also found a life coach in the unseen Katie. There’s an obvious setup for a future romance going on here. He also hedges his retirement plans by buying the bar where the gang usually hangs out. We learn some nice back-story stuff this season. He used to sing and play guitar with a guy who wrote songs for them. This season his old partner’s grandson arrives in town and wants to play some of those songs with Vince on stage at the bar.

Jordan Bridges is Jane’s brother and the newest detective on the squad, Detective Frankie Rizzoli. Frankie’s eager to please and soak up as much as he can. Of course, he’s very green and prone to rookie mistakes. Together they basically solve a new crime each week.

The newest member of the squad is Nina Holiday, played by Idara Victor. She’s kind of the replacement for Frost, but not really. She does the tech work that was his specialty but is not a field detective. The idea was the make that more of an in-house job. The season keeps Frost’s desk open with his blue robot plainly visible throughout the season. They do a pretty solid job of showing the emotional loss for the surviving characters. He didn’t die in the line of duty, but rather in a car accident on the way home from vacation.

The show’s mythology arc is found with the friends’ family lives. The Sopranos’ Lorraine Bracco is the Rizzoli matriarch, Angela, who used to run the cafe inside the precinct. Dad walked out on the family in earlier episodes. She now works for Vince at his new bar. The family stuff is the framework around which the crime of the episode is broken up. The lightness of the relationship is a nice balance to the often grisly and intense crimes the pair is called upon to investigate.

The episodes rely on both Rizzoli’s investigation skills and Isles’ scientific approach. This season finds the cases running from the bizarre to the lighthearted. There’s a man who thinks he’s a werewolf who happens to be a key in solving a case. It’s great fodder for the usual witty banter between Rizzoli and Iles themselves. Isles looks at it from the scientific point of view, while Rizzoli is just weirded out by it all. The show can offer some original victims. One case has the crew discovering mummified remains. The high point of the season is a rare two-part episode that stars Battlestar Galactica’s Jamie Bamber as a suspect who might have murdered his mistress. He’s a high-profile district attorney, and Rizzoli finds her emotions changing for the suspect. He ends up falling from a bridge in the first part cliffhanger with Rizzoli following to try to save him. The show does a pretty solid job of using the time without the obvious appearance of padding. I had the opportunity to chat with Jamie Bamber a while back. You can listen to that interview here.

You get 18 episodes on five discs. This is the most episodes on a season to date for the show. There is a 20-minute inside feature on the Jamie Bamber episode that focuses on the stunt of having the characters fall/jump from the bridge. It’s actually more entertaining than I expected and was done without the expected computer assist or wire-work harness. You also get the usual gag reel. The season ends with a pretty normal episode and not any kind of cliffhanger. This remains one of those kinds of shows that you can pick up almost anywhere at all. You’ll get more out of it if you understand some of the back-story information but it is absolutely unnecessary. This show is accessible at pretty much any point whatsoever. It’s a charming show and you never really know what they’re going to do next. “I won’t even rule out the little green men. They’re a slippery bunch.”

Gino Sassani is a member of the Southeastern Film Critic's Association (SEFCA). He is a film and television critic based in Tampa, Florida. He's also the Senior Editor here at Upcomingdiscs. Gino started reviewing films in the early 1990's as a segment of his local television show Focus. He's an award-winning recording artist for Omega Records. Gino is currently working on his 8th album Merchants & Mercenaries. Gino took over Upcomingdiscs Dec 1, 2008. He works out of a home theater he calls The Reel World. Favorite films: The Godfather, The Godfather Part II, The Body Snatcher (Val Lewton film with Karloff and Lugosi, not the pod people film), Unforgiven, Gladiator, The Lion King, Jaws, Son Of Frankenstein, The Good, The Bad And The Ugly, and Monsters, Inc.
Healing The DUFF (Blu-ray)