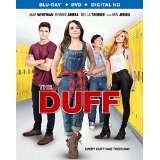 “That’s your job as The DUFF…Designated Ugly Fat Friend.”

Let’s just get this out of the way right at the top. The idea that Mae Whitman — or any other actress cast as the lead in a mainstream Hollywood movie — is “Ugly” and “Fat” is absurd. (Not to mention entirely subjective.) So it’s tempting to dismiss The DUFF as the latest bit of evidence that there’s no truth in advertising. But then you’d be missing out on a charming teen comedy that grabs the snarky underdog baton previously held by the likes of Mean Girls and Easy A.

“Every group of friends has one. The one who doesn’t look as good, thus making their friends look better. The one who’s approachable and easy to talk to because no one’s trying to get in her pants…”

Bianca Piper (Whitman) is the DUFF among her group of friends, which also includes popular classmates Jess (Skyler Samuels) and Casey (Bianca Santos). Wesley Rush (Robbie Amell), the handsome jock who also happens to live next door, is the one who gives Bianca her rude awakening concerning her social status at school. After a falling out with Jess and Casey, Bianca enlists Wesley’s help in de-DUFFing herself so she can get the guy (Nick Eversman) she’s crushing on. In exchange, Bianca agrees to tutor Wesley so he can keep his football scholarship. As they spend more time together, the two frenemies grow closer, much to the chagrin of Wesley’s on-again/off-again Mean Girl-friend Madison Morgan (Bella Thorne).

As with any romantic comedy worth its salt, you can absolutely tell where all of this is heading. (The DUFF initially sidesteps the “Top of the Staircase” cliché by having Bianca quip “it was just me…in a dress” after an early transformation, only to bust out a slow-mo strut to reveal what she’s wearing at the homecoming dance.) Since the plotting in this sort of movie is never intended to reinvent the wheel, the pleasures lie in casting appealing performers and filmmakers who inventively color inside these lines.

The DUFF is based on the novel of the same name by Kody Keplinger. But the movie arguably owes an even bigger debt to the many hit teen comedies that preceded it. The film opens with opening narration of Bianca listing the archetypes from The Breakfast Club, but noting that now “geeks” pretty much run the world, “jocks” spend as much time playing videogames as those geeks, and “princesses” are often on anti-depressants. Meanwhile, Wesley’s makeover of Bianca harkens back to everything from My Fair Lady to She’s All That.

And the movie’s examination of various high school cliques and the difficulty of shaking off labels puts it squarely in Mean Girls/Heathers territory. The DUFF puts a (painfully) modern spin on these conventions by heavily incorporating social media. It’s mostly amusing (like Bianca’s “break-up” scene with Jess and Casey; also, the “Burn Book” from Mean Girls is supplanted by embarrassing viral videos) and a little irritating (cast members’ Twitter handles are included alongside their names during the end credis.) I wish the movie had pushed harder on the idea that the overabundance of social media has contributed to increased awkwardness and (ironically) lack of social skills among younger people, which may or may not result in more DUFFs.

However, the film’s real trump card is that it’s an inclusive, equal opportunity offender. Instead of cruelly picking on a certain type of girl — Bianca favors flannel, combat boots, and zombie flicks — the movie notes there are all types of DUFFs, including Political DUFFs (Chris Christie) and Tyrannical DUFFs (Kim Jong-un). In fact, The DUFF goes even further by positing that everyone has either been — or will be — the Designated Ugly Fat Friend at some point in their lives.

It’s a mushy, life-affirming lesson that complements the movie’s sharper, tarter edges. Director Ari Sandel incorporates fantasy sequences, montages (who can resist a good ol’ fashioned makeover?) and TV-style cutaways to liven up the proceedings, and his tactics work quite nicely. His efforts are buoyed by a pair of nimble, likable leads. Funnily enough, the first time I noticed Whitman was when she played the thoroughly forgettable Ann Veal on Arrested Development. She’s delivered consistently strong work in a variety of projects over the years — most notably on NBC’s Parenthood, a personal favorite of mine — but this is her first time taking the lead. It’s not a star-making performance on par with Lindsay Lohan and Emma Stone’s work in their own teen comedy breakouts. But Whitman carries the film with aplomb, radiating both intelligence and insecurity. (Because the two aren’t mutually exclusive.) Meanwhile, Amell makes for handsome, witty doofus and a fun foil for Whitman.

The rest of the characters aren’t nearly as well-rounded, though I really did appreciate the fact that Jess and Casey weren’t just unpleasant stereotypes in high heels. Unfortunately, that burden falls on Thorne, who delivers the nastiness but none of the glee that can make this type of character fun to watch. The adult cast — Allison Janney as Bianca’s enterprising mom, Romany Malco as the principal who’s hypersensitive to cyber bullying, and a slightly toned-down Ken Jeong as a sympathetic teacher — is solid if underused.

I’m not saying whether or not Bianca gets the guy at the end, but I like that The DUFF isn’t really about that; instead, it’s about learning to be comfortable in one’s own skin. (Which, of course, makes someone like Bianca more attractive and likelier to get “the guy.”) Ok, fine…it’s also about whether or not she gets the guy.

The DTS-HD Master Audio 5.1 track is considerably livelier than the film’s visual presentation, and is highlighted by terrific fidelity and separation. The (frequent) musical cues are distributed nicely throughout the entire surround sound field, and they never interfere with the one-liners, which are always crisp and clear. The rears offer very subdued atmospheric noises, while the subs are only heard from during the more thumping songs on the soundtrack. (Most notably, during the party at Madison’s house.)

The DUFF Hits the Red Carpet: (3:30) Cast and crew attend the film’s Hollywood premiere at the TCL Chinese Theatre, which includes interviews from the red carpet and a general sense of glee over being together in the same place again.

Extended Gag Reel: (3:15) There are some bloopers that play over the end credits, but this special feature gives goofballs like Jeong and Chris Wylde (as a fellow loopy teacher) more space to riff

Bringing the Book to Life (2:15) Author Kody Keplinger talks about first being exposed to the term DUFF during her senior year in high school and writing the book shortly thereafter. She talks about a blog post she wrote in which she included a fantasy cast for the movie version of “The DUFF”: her choice for Bianca was…Mae Whitman. The one special feature on this disc that I wish was longer.

Teen Comedies and The DUFF: (2:04) Say Anything…, the films of John Hughes, and (of course) Mean Girls are all name checked in this quick special feature that examines the enduring appeal of stories about struggling to fit in during your high school years.

I Am The DUFF: (2:42) Cast and crew members talk about feeling like DUFFs in real life, though Romany Malco will only cop to being a FOB (Friendly Over-the-top Brother)

The DUFF Files: (7:21) Character profiles (featuring comments from the cast) on Bianca, Wesley, Madison, Jess and Casey, and the Faculty of Malloy High. Features a Play All option.

Mean Girls came out in 2004, and Easy A opened six years later in 2010. In other words, we were pretty much due for a movie like The DUFF.

It’s not quite as quotable as its predecessors, but it is thoroughly watchable — and, more importantly, re-watchable — and should ably fill the teen comedy vacuum until the next one of these comes along in five or six years.