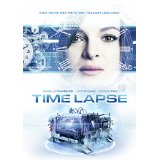 We find three roommates, all not living up to their potential: a starving artist, a struggling writer, and a desperate gambler. While their dreams fall to the wayside, they work for the apartment complex they live in, performing maintenance and checking on tenants. One day the landlord calls for them to check on someone who is behind on their rent. They find that the man who lives there is dead, and seems to have been taking photos of them without their knowledge; however, these are photos set a day in the future taken by a strange machine. They start to use this machine to their advantage, but they always keep in mind that time is a tricky thing to mess with, and act out whatever they see on the photo even if they don’t want to do what the photo says they will. The photos keep coming, and like addicts, they can’t turn away from them, even while the situation starts to escalate into violence.

I like how movies try to view time in different ways, and this movie did a great job at saying that our future is inevitable. This isn’t Back to the Future where you can change the photo by doing something different in the past; whatever is on the photo is going to happen. This movie was all around mediocre, with an interesting theory; however, the thing that really dragged this movie down was clunky character development. This movie has (what I like to call) an original skeptic, someone who doesn’t believe this large machine is capable of taking photos that are  set in the future; however, this skeptic was silenced into belief way too soon.  He goes from questioning if the photos are from the future, to believing that this is a prophecy-producing machine only because a coat rack was knocked over. If we were talking about a true skeptic, he would have not believed until there was something more evident staring him right in the face. Then the roles are reversed, and we are introduced to the after-skeptics, people who originally believed in this machine, then become skeptical because of something that happens outside of their wheelhouse; in this case it is when the other two roommates see a picture that foretells violence. It doubles back on itself and just seems so lazy. Everything else in the movie, beyond the ending, just seems very cliché. Of course the roommate with the gambling problem gets in trouble with his bookie for winning too much. Of course the artist who uses the machine to foretell his future art becomes addicted to the use of the machine, then wants to destroy it. Of course the only girl in the film is going to be caught in a sexually explicit scandal. It’s just filled with things like this that make an original idea, with a surprising ending, into a boring movie.

The gritty texture to this movie, coupled with the atmospheric landscape, really made this movie a sight to behold. When I was looking at the future photography machine, I felt that it was powerful, and should be avoided. When I was introduced to a scene of violence, it made me feel uneasy. Given that this is the director’s first time helming a full length movie, I say it is a great accomplishment. The only thing I can say in the negative about the direction of this movie is that it feels like a grandfather filmed it. When I was looking at the party scene, I couldn’t help but think that all of the actors were saying to themselves, “yes, this is how young people have fun… yippee.” You never see a current-generation cell phone in this; it’s always a flip phone, and since the cell phones are constantly used, you would think that the director would attempt to join us in this decade.

The only word I can think of to describe the acting in this movie is: OK. Danielle Panabaker does OK in the role of THE girl in the film; she can’t emote anything but “awkward girl”, but at least she does awkward girl well. George Finn is OK as the drug-addicted roommate; he masters the thousand-yard stare but can’t seem to make me truly believe he is addicted to anything. The biggest compliment to this movie’s acting credits was Matt O’Leary. He makes me truly believe that he is an artist who gets too lost in his work, neglecting normal human responsibilities for the sake of his passion, like when he allows a kiss shared by his girlfriend and his best friend to go on way too long.

All in all this movie is solid for a person who has nothing better to do. If you are looking for something truly unique and inspirational, I would try to find something else.