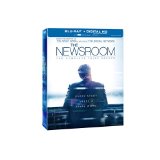 “We’re not in the middle of the third act. We just got to the end of the first.”

Aaron Sorkin almost definitely knew The Newsroom had been simultaneously renewed for a third season and canceled when he wrote those words, which come at the end of the season 3 premiere. It’s a winking and bittersweet bit of writing for a show that seemingly infuriated as many more people than it delighted over the course of 25 episodes. (Which apparently amounts to a single season of Pretty Little Liars.) So how else would you expect The Newsroom to go out than with moments of singular brilliance mixed in with a few controversial bangs?

Before we get to the controversy, let’s do a quick catch-up of where we left things off at the end of season 2, and where the characters find themselves for this final batch of episodes. The Atlantis Cable News team — led by “News Night” anchor Will McAvoy (Jeff Daniels) and his executive producer/fiancée MacKenzie McHale (Emily Mortimer) — all managed to keep their jobs after the Genoa debacle/hoax, but they are still licking their wounds and striving to get back the trust of the public. So naturally, the first ripped-from-the-near-past story the team has to cover is the murky Boston Marathon bombing, which serves as a springboard for one of the season’s recurring themes: the rise of citizen journalism in the floundering news industry.

The overarching story for the season, however, is a shout-out to the Edward Snowden saga. ACN blogger/all-around internet expert Neal Sampat (Dev Patel) inadvertently commits espionage after he convinces a shadowy anonymous source to share stolen, confidential documents involving U.S. malfeasance overseas. Neal is advised to flee the country — just when it looks like Patel is about to get a major storyline on this show, his character vanishes; no worries, Neal makes a satisfying return before the finale — leaving the rest of the “News Night” team to bear the brunt of the federal government’s wrath. The bulk of the heat falls on Will, who refuses to divulge the identity of Neal’s source, even under the increasingly likely threat that he could go to prison.

Since these final six episodes needed to put a bow on the entire series, several story threads from previous seasons get plenty of screen time. The most urgent one is that ACN’s persistent financial struggles — the more principled and polarizing version of “News Night” hasn’t exactly resulted in a ratings bonanza — leave the network vulnerable to a hostile takeover. And much to the chagrin to anyone who rolls their eyes at Sorkin’s homages to rat-a-tat, His Girl Friday romantic office banter, there’s plenty of coupling going on. In addition to Will and Mac’s impending nuptials, executive producer Don Keefer (Thomas Sadoski) and his quirky anchor Sloane Sabbith (Olivia Munn) try to keep their taboo relationship quiet.

Meanwhile, old-school/young guy senior producer Jim Harper (Jonathan Gallagher Jr.) continues his relationship with new girlfriend Hallie Shea (guest star Grace Gummer), who is more open-minded to the newer wave of online journalism. Of course, Hallie’s most fatal flaw is that she’s not Maggie Jordan (Alison Pill), the associate producer Jim has been in love with since he first laid eyes on her, and who really comes into her down during the show’s last hurrah. And finally, there’s Charlie Skinner (Sam Waterston), the news division president whose resistance and eventual acceptance of the more modern, crasser way to report the news is truly heartbreaking.

–“Whenever you hear someone giving a monologue defending the ethics of their position, you can be pretty sure they know they’re wrong.”

– “Can I point something out to you? You’re giving a monologue.”

Of course, the things that ultimately defined The Newsroom — more so than the zany office romances or allegedly daffy female characters — were Sorkin’s hyper-literate, heavy-handed screeds on a variety of topics. They were often equal parts passionate, inflammatory, and exhilarating. (Although in Ep. 3/“Main Justice”, Sorkin tries a new gear when the show addresses climate change: hilariously deadpan fatalism.) The show undoubtedly got in the hottest water this season with a subplot in Ep. 5/“Oh Shenandoah.” Don is assigned to interview a female college student who has started a website where victims of sexual assault can anonymously name their attackers. But instead of convincing her to face one of the men she’s accused on ACN’s air like he’s supposed to, Don tells her that he feels squeamish about putting her on TV alongside a guy who hasn’t been formally charged with a crime. (Despite the fact that Don actually finds her totally credible.)

Some would say The Newsroom gave itself an unfair advantage by having ACN report on real-life events with the benefit of hindsight. But this is a case where the show actually anticipated a hot-button topic. (The episode originally aired soon after Rolling Stone published an article about an alleged gang rape at the University of Virginia.) This is obviously extremely sensitive stuff; a writer on Sorkin’s own Newsroom staff was dismissed after refusing to drop her objections. To me, the greatness of The Newsroom had virtually nothing to do with whether I agreed with the show’s stance on this or any other issue. As much as I enjoy my escapist bits of entertainment, I thoroughly appreciated that there was a high-profile show on the highest-profile TV channel that bothered to dramatize thorny issues like the relationship between the scars the judicial system and the media can leave on an individual.

The delivery system of these ideas — preachy, overwrought speeches — sometimes served to obscure them, but they absolutely represented a strong, invested point of view. (I doubt the talented people in the House of Cards writing staff, for example, ever cared enough about a storyline to get themselves kicked out of the room.) And despite his screenwriting Oscar, Sorkin is ultimately most closely associated with his work on the small-screen. In turn, he seems to have an appreciation for TV conventions.

As The Newsroom winds toward its series finale, we get the sort of finale-ish things TV viewers have come to expect: a wedding, a surprise pregnancy, and the death of a major character. The cast is in top-form as always. Daniels’ Will remains an authoritative, mercurial leader for the ensemble. Waterston is consistently great to watch as Charlie descends further into madness. (Kudos to guest star B.J. Novak for perfectly playing the smarmy bane of everyone’s existence, whose goal is to “crowdsource the news.”) Pill deftly underplays Maggie’s continued growth confidence, which still feels like an extended mea culpa for making the character so tragic in season 1. And I’ve always been amused by the fact that a firebrand like Sorkin cast the most politically polarizing actress in Hollywood — Jane Fonda as company president Leona Lansing — and gave her the most kickass material. (Season 3 and its finale is no exception.)

The Newsroom: The Complete Third Season is presented in its original aspect ratio of 1.78:1. The 1080p image is arrived at with an AVC MPEG-4 codec at an average of 25 mbps. The show’s standout pilot was shot on somewhat grittier-looking film, but the rest of the series has been shot digitally. This season 3 set retains the slicker digital look, which gives us a cleaner, more detailed look at ACN’s state-of-the-art TV studio and newsroom. Color and contrast remain strong, as do the warm, pleasingly-nuanced fleshed tones. There isn’t really a  visual departure on the level of season 2’s jaunt to Africa. Almost all of the action this season takes place in newsrooms, boardrooms, conference rooms, and courtrooms, each of which are presented with strong clarity. This isn’t as obvious as dazzler as other HBO HD offerings, but it’s a very strong effort nonetheless.

The DTS-HD Master Audio 5.1 track remains keenly aware that — no matter how great Daniels and the rest of the cast are — Sorkin’s dialogue is the real star of the show. Not only are the words always clear and crisp, but the track juggles the constant overlapping dialogue beautifully, especially during any hectic “News Night” broadcast. The audio track’s second most important job on an Aaron Sorkin show is bringing the buzzy workplace scenes to life. Here, we get a dynamic sound field with sneaky directionality that utilizes the rears consistently without ever overwhelming the action up front. The fullest sound we get takes place (unfortunately) during an indulgent, somewhat contrived jam session of “That’s How I Got to Memphis” in the finale.

Inside the Episodes: (21:05)  Once again, these brief segments feature Sorkin summarizing the themes of each episode. It’s here that he explicitly points out the “citizen journalist vs. professional journalist theme” and reiterates his quixotic mission to elevate the quality of the cultural conversation. (He recycles the words he put in Will’s mouth earlier in the show’s run: “snark is the idiot’s version of wit.” Presented in HD.

Audio Commentary: There is only one track this time around, and it accompanies the series finale. Sorkin and executive producer/director Alan Poul touch on everything from the episode’s title (Sorkin has used “What Kind of Day Has It Been” as a finale title for each of his four shows) and the decision to basically make the Newsroom series finale a co-“Pilot.” (We get to see Charlie recruit Mac for “News Night” along with other “missing scenes” from the series’ first episode.) To be honest, I was quite underwhelmed with this finale when I first watched it live — and I could still do without the indulgent garage band jam session — but I enjoyed it more the second time around, especially after listening to Sorkin and Poul talk about how they constructed it.

You can say a lot of things about Aaron Sorkin, but he was certainly no shrinking violet. Among his stated goals with The Newsroom and its characters, Sorkin wanted to bite back against the “demonizing of intelligence” and kickstart a “renaissance of decency.” Both seem like totally worthy goals until you realize that first one arrogantly assumes a certain level of intelligence (which Sorkin is more than happy to back up). On top of that, it’s hard to stage a “renaissance of decency” in a TV landscape that has favored anti-heros and grittier, more salacious stories for the better part of this century.

All of this is to say The Newsroom was an odd duck. There was absolutely nothing like it on the air. I suspect even people who tuned in to hate-watch will miss having this show to kick around. I’m genuinely going to miss it. So the best farewell I can think of is to simply say, “good show, everybody.”