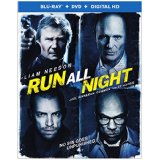 “Tell everyone to get ready.  Jimmy is coming.”

If someone were to tell me while walking out of Schindler’s List that 20 years later Liam Neeson would be an action star, I would have thought they were out of their mind.  Between the trio of Taken films and numerous films that seem to be cut from the same ilk, Liam Neeson seems to be walking in the same footsteps as Charles Bronson and Clint Eastwood as being the go-to everyman who just so happens to be a badass with or without a gun.  It’s that odd bit of typecasting that in many ways hurts Run All Night; after all, the trailers give us the vibe that this is nothing more than am action film where yet again his family is in peril, when really it has so much more going for it.

What I can’t stand about the film from the get-go is the film has an opening sequence that gives away the ending, only to take us back 16 hours before we see Liam Neeson lying alone in the woods staring up at the sky.  Why those involved would decide to cock-block themselves is beyond me; it removes every chance for suspense during the film, because no matter how desperate things get and how impossible a situation may be to escape from, the viewer knows that somehow the character has to escape.  Cut this two minutes out of the film and it is better for it; heck, I recommend the audience skips out of this scene just so they can experience the film where the stakes are always high and the viewer never knows just what will happen next.

As for the rest of the film, it is a blast up to the very end.

Jimmy Conlon (Neeson) used to be a criminal that people feared; he was the guy you never wanted knocking on your door in the middle of the night, because it would mean you’d be dead.  But those days are behind Jimmy; now he’s trying to make it day to day while nursing an alcohol problem.  He’s a pitiful drunk who is desperate for any kind of job that will pay, even if it’s being dressed as Santa while spoiled kids sit on his lap and members of the crime family look on in shame and disgrace.  Neeson plays rock bottom so well that when we see him kick into action, it’s like watching another person, and in a way it is.

Joel Kinnaman plays Jimmy’s son Mike.  Mike has had to grow up with his father who wasn’t around and has simply developed hatred toward his father.  Though it’s well deserved, of course you want to see the father and son work through their issues, but it’s going to take a lot to even get these two in the same room together.  As it turns out, it takes Mike witnessing a murder to get the two together.  The perpetrator of the crime happens to be the son of New York’s crime boss, Shawn Maguire (Ed Harris).  Well, things hit the fan when Jimmy is put in a situation where he has to kill Shawn’s son in order to protect his own son.  And this is what kicks off the marathon of manhunts.

Where this film thrives is in how much we get to see these fathers have to dwell on the decisions and mistakes that have led them towards this night.  The friendship between Jimmy and Shawn is well played here, and we see the pain these men are going through to protect their sons and defend their honor.  It’s these raw emotions we see the men exchange throughout the film that have us sympathizing for both men and understanding and even respecting their actions despite all the bloodshed.

About all that bloodshed: this is a film that shows how every punch and every gunshot takes its toll and has a consequence.  Whether it’s the brutal hand-to-hand fight in a subway bathroom or escaping an apartment swarming with cops and a hired assassin played by Common, the action, despite how over-the-top it may be, manages to remain mostly grounded in reality.

I already mentioned the main players in the film, but there is still so much star power sprinkled in the film.  There is Vincent D’Onofrio as the one honest cop in the city, Bruce McGill (you may not know the name, but you’ll know him when you see him) as Shawn’s right hand man, and Nick Nolte as Jimmy’s brother.  This is one of the best casts assembled for some time, and everyone delivers while on screen.

I had so much fun with the film; it’s one of those movies where you know it won’t win awards or break a hundred million at the box office, but it’s still a helluva fun flick.  This is the kind of movie I’d imagine Sam Peckinpah would make if he were still around, or if Walter Hill were to ever get his mojo back.  Despite the opening scene, my only gripe is how the film would transition location to location with a digital zoom that just looked like a gimmick that got overused and just wasn’t needed for this film.

Run All Night is presented in its original aspect ratio of 2.40:1. The 1080p image is arrived at with an AVC MPEG-4 codec at an average 35 mbps. This is a very filmic high-definition image presentation. There’s a nice fine element of grain to the image that makes it feel organic throughout. It’s also a very dark film when you consider it all takes place in the span of a single night. Black levels are rather gritty, and while there’s not a lot of shadow definition, the picture more than makes up for it by being gritty and loaded with texture. The texture is also quite evident in close-ups on Jimmy’s grizzled face. There are some small enhancement issues and a touch of digital noise that you really have to be looking for to catch. Nothing distracting, and we end up with a rather realistic image.

The DTS-HD Master Audio 7.1 will take you a little by surprise. At first I wasn’t expecting much from a 7.1 presentation. I remembered that the best audio moments of the film are the intimate dialog moments. That still remains true, but the expanded sound field adds some nice subtle touches found mostly in the gunfights and the score. There’s a more immersive element than I initially expected. That isn’t to say that the best stuff isn’t still the quiet dialog stuff. Here the audio presentation pulls back just the way it needs to.

Shoot All Night: (10:26) The cast and crew spend much of the time talking about the adjustments to a night work environment for 48 nights. There’s plenty of behind the scenes footage here with focus on the New York locations and the action sequences.

Liam Neeson – Action All Night: (6:09) This is pretty much the love-fest portion of the extras. Everyone talks about how great it was to work with Neeson. There is some behind-the-scenes stuff here and a lot of clips from the film.

Deleted Scenes: (16:20) There is no individual selection here. Mostly there are alternate and extended scenes.

Run All Night is a throwback film that is everything a guys’ action film should be, and despite its flaws, it’s a film I see finding an audience over time, unlike a certain action franchise filled with aging action stars that seem to have all lost their edge.

Jeremy Butler is a film school graduate of the International Academy of Design and Technology. He is been writing for Upcomingdiscs since 2012; however, movies have played a big part of his life for much longer. Favorite genres include horror, science fiction/fantasy, and comedy. Favorite movies are V for Vendetta, Boondocks Saints, Kiss Kiss Bang Bang, and The Godfather.
Beyond the Reach (Blu-ray) Time Lapse