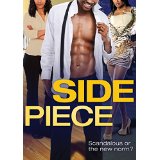 This was one of the best documentaries that I have seen in a long time. Very engaging, and it covers subject matter that everyone already has an opinion on: infidelity. Of course you can tell from the appropriately coined title that it focuses on the idea of individuals in a committed relationship who seek additional gratification outside their relationship. This documentary does a good job of addressing all expects of this topic including how media outlets such as poplar television series and reality portray the stigma. Broken down into multiple sections, we are even treated to hearing from celebrities as well as the public about their opinions of having or being a side piece. It was a truly illuminating experience.

One the key aspects I enjoyed about this documentary was that when illustrating the role extramarital affairs play in our everyday television watching, they point out a prime of example of a side piece in one of the most watched television series of this generation: Scandal. For those not in the know (though I doubt there are many not in the know) Scandal is a popular series starring Kerry Washington who, and I hope I’m not spoiling this for anyone, is the mistress of the President of the United States. This is the best example of this story topic possible; honestly, I’m a little stunned at the fact that I didn’t register this until they pointed it out. Scandal is an example of this stigma of knowing that the person you’re with is committed to another, and instead of doing the right thing and dumping this person, you engage in an affair, and the crazy thing about the show is we tune in every week to cheer for the person who is essentially a mistress. Now before I receive a ton of negative comments about this, let me be clear, this is not an indictment at all, simply a statement of fact, and the documentary does cover both sides of the issue.

Thus is the case with its reference to reality television show Love and Hip Hop. Here the audience gets to hear the perspective of the mistress as well as the “main” as they are usually addressed, as well as from the cheater. Through multiple clips we see the effects the situation has on all parties involved as well as hear from celebrities and the public on their views on the subject. This is the bread and butter of the documentary, because it includes multiple different perspectives, and the audience can see if their line of thinking matches another person’s. Further, this is the section where the documentary maintains the neutral balance needed for a successful documentary; the makers of the film must main objectivity and keep their own opinions out of it, and fortunately that is done very well throughout the duration.

As I mentioned before, it doesn’t just address the stigma on television; social media such as YouTube vides are put into the mix as well. Videos from a popular channel showing the different treatment for your girlfriend or wife and your sidepiece are included, intercut with celebrities such as Malinda Williams and Trina Braxton sharing their experiences and opinions. It is very informative, and I know that an audience will respond to it.

In conclusion, this is a very worthwhile documentary. It is not time-consuming, as its runtime is under an hour; however, it covers a wide range and has little something for everyone in my opinion. I highly doubt anyone watching this will not be entertained or won’t take something away from the experience. I know I did.

Jeremy Butler is a film school graduate of the International Academy of Design and Technology. He is been writing for Upcomingdiscs since 2012; however, movies have played a big part of his life for much longer. Favorite genres include horror, science fiction/fantasy, and comedy. Favorite movies are V for Vendetta, Boondocks Saints, Kiss Kiss Bang Bang, and The Godfather.
The Newsroom: The Complete Third Season (Blu-ray) The Wrecking Crew (Blu-ray)