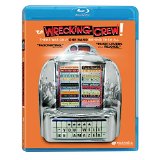 What do Elvis Presley, Frank Sinatra, The Beach Boys, Sonny & Cher, The Monkees, and Nat King Cole have in common? (Besides, of course, their undisputed status as musical icons and the adoration of millions of fans.) Well at various points in their illustrious careers, they were each backed by The Wrecking Crew, a tight-knit group of session musicians responsible for cranking out some of the most familiar hits of all time. This documentary is a lively love letter to that incredibly charismatic and cohesive group, whose contributions remained largely anonymous for decades.

Early on in The Wrecking Crew, we are presented with some snippets from the group’s work as if we were scanning stations on car radio; it doubles as a tour through the history of pop music in the 20th century. The film is directed by Denny Tedesco and we quickly learn his very personal motivation for making this movie. His father, Tommy Tedesco, was a master session guitarist whose work can be heard on everything from Sinatra’s “Strangers in the Night” to the Bonanza and Batman themes. But the general public’s lack of awareness regarding Tedesco’s contributions was magnified after his 1997 death. (The film points at a few televised obituaries, which misspelled his last name or called him “Tony Tedesco.”)

The basis of the film is a 1996 gathering in L.A. of four notable Wrecking Crew members. There was Tedesco, drummer Hal Blaine, bassist Carol Kaye, and saxophonist Plas Johnson. The quartet sits around sharing war stories from the mid-’60s and each member has a portion of the 102-minute running time dedicated to them. (Kaye was such a virtuosic bass player, the fact that she was a woman was hardly noteworthy; Tedesco notes he was no child prodigy and didn’t seriously begin playing guitar till his mid-20s.) The Wrecking Crew also includes a heavy dose of talking head commentary from a number of musical luminaries, including Cher, Dick Clark, Nancy Sinatra, Brian Wilson, and a good number of other Wrecking Crew members. (For the record, no one can agree on how many people were actually in the group; estimates range from 12 to more than 30.)

“They were the ones with all the spirit and all the know-how, especially for rock and roll music.”

That praise is heaped upon The Wrecking Crew by none other than Brian Wilson, which is fitting since the film actually opens with an audio clip of a “Pet Sounds” recording session in 1965. (Between the release of this documentary and Love & Mercy, The Beach Boys are having their moment at the movies 50 years later.) Wilson openly talks about recruiting The Wrecking Crew to play the music on what turned out to be one of the most influential albums of all time. It was partly because The Beach Boys themselves were busy touring, but the film not-so-subtly posits that it was also because the Crew was better equipped to handle Wilson’s complex arrangements.

In addition to “Pet Sounds”, there are segments dedicated to The Wrecking Crew’s work with Phil Spector — they were occasionally featured under the name “The Phil Spector Wall of Sound Orchestra” — including “You’ve Lost That Loving Feelin’”, which was determined to be the most-played song in history. The film ventures into somewhat testier territory when it goes from Wrecking Crew members contributing a key riff or lick to a classic pop song to totally displacing an established pop group. Peter Tork of The Monkees cops to being aggravated when he and his bandmates were pushed aside in favor of The Wrecking Crew during a recording session. (Although he and Mickey Dolenz also concede it was the right thing to do since the Crew were a much more talented group of musicians.)

It’s tempting to ding The Wrecking Crew for overpraising its subjects, at least at the expense of the artists who actually created the musical compositions that the group would go on to play so masterfully. At one point, Dick Clark mentions that he wasn’t aware of the idea that certain musical acts didn’t play their own material in the studio. (That’s frankly a little hard for me to believe since he’s Dick Clark, the ultimate music industry insider.) Still, the point remains that it’s very hard to overstate their contribution to American pop music. Wrecking Crew drummer Earl Palmer talks about cranking out entire albums in a single day, and that sort prowess was certainly invaluable to creative types whose minds work a mile a minute.

Of course, that constant work had its pros (Kaye proudly brags about earning more money than the president of the United States at one point in her career) and cons (Johnson ruefully talks about being a better grandfather than father, and Blaine casually mentions his multiple marriages, one of which left him in financial ruin). But despite segments like the one in which Johnson talks about not receiving credit (or money) for his work on The Marketts’ “Surfer Stomp”, the vibe here is overwhelmingly celebratory. (Blaine brags about the fact that he played on seven consecutive Records of the Year at one point in his career.)

The Wrecking Crew is laid-back — not unlike the mid-1960s L.A. vibe it chronicles — and not quite as energetic or visually inventive as Standing in the Shadows of Motown or the Oscar-winning 20 Feet From Stardom, a pair of music docs that also shone a spotlight on a group of unheralded musical contributors. However, it’s a relentlessly toe-tapping crowd-pleaser and a thoroughly delightful watch for anyone who, simply put, enjoyed music in the 20th century.

The Wrecking Crew is presented in an aspect ratio of 1.78:1. The 1080p image is arrived at with an AVC MPEG-4 codec at an average of 36 mbps. Almost all of the film is comprised of archival footage from the 1960s or blurry, full-screen talking head segments from the 1990s. (Which explains why people like the late, great Dick Clark could participate.) Simply put, the quality here is not good, and it seems like little-to-no resources were devoted to upgrading the presentation to HD standards. The good(ish) news is that what we’re seeing hasn’t been artificially scrubbed at the expense of authenticity. The few modern touches include interstitial title cards that offer the film’s only bursts of color.

The DTS-HD Master Audio 5.1 track, on the other hand, is a total winner and streets ahead of what you typically get from dialogue-heavy documentaries. Not surprisingly, there is *a lot* of music in this film, and the quality of what we get matches that of some concert Blu-rays I’ve personally reviewed. The robust, dynamic sound stretches across all the speakers (you can even pick out the occasional pops from the original recordings), but I was more impressed by the substantial bottom end. Kaye offers a few mini tutorials on the bass, which gives the subs a chance to shine. This disc is almost worth recommending solely based on the exceptional sonic presentation, which gives these classic hits new life.

Deleted Scenes: The Blu-ray boasts more than six hours of bonus material, and the bulk can be found on these “deleted scenes”, which are mostly comprised of interview snippets from Wrecking Crew members who didn’t get their due in the theatrical cut. The breadth and quality of material here is phenomenal (some truly fantastic anecdotes here), but they are all presented in standard definition and annoying as heck to navigate. (I couldn’t return to the main menu without fast forwarding to the end of an interview.) Each of the highlighted categories below features a Play All option.

“Songs” (57:40) features anecdotes revolving around the creation and legacy of hits like “A Little Less Conversation”, “Twistin’ the Night Away”, “California Dreamin’” and others. “Themes” (40:02) covered cultural shifts like Beatlemania, changes in recording technology, and the Wrecking Crew’s insane work ethic. “Musician Jokes” (6:24) amusingly features a rim shot after each corny punchline. “Guitar”(1:00:11) is highlighted by some bonus Tommy Tedesco footage of him doing some stage patter and performing for an audience. “Engineers” (27:31) takes time to praise some of the non-musical talent behind the scenes, while “Artists” (43:11) features bonus thoughts from the likes of Barry Maguire, Peter Tork, and Richard Carpenter.

Song Credits: (2:51) Plays out like a movie’s end credits and gives belated recognition to Wrecking Crew members for their contributions to iconic songs/themes.

Dedications: (2:05) Wrecking crew members get shout-outs in this list of dedications that accompanies their many classic songs.

Donors, Sponsors, Kickstarters: (7:29) Acknowledges the people and sponsors who helped finance the documentary.

This documentary’s journey into our living rooms is almost as long and winding as The Wrecking Crew’s road to widespread recognition. Production technically began in 1996 (with that meeting in Los Angeles between Tedesco, Blaine, Kaye, and Johnson), but the film wasn’t released until 2008 and only played the festival circuit. A Kickstarter campaign in 2013 — to help cover the very, *very* pricey licensing costs associated with all the music in the film — led to a theatrical release earlier this year, and finally this nifty Blu-ray. (Which is fashioned to look like a record.)

The Wrecking Crew is a pretty straightforward piece of filmmaking, but it absolutely succeeds in giving a phenomenal group of underappreciated musicians their due.