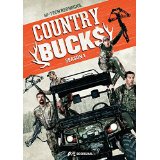 “We’re just a typical American family that just happens to run a multimillion dollar outdoor empire. We create, test and sell the world’s coolest products for the modern outdoorsman, and we find our inspiration on a little slice of Heaven called the Busbice Family Ranch in Louisiana.”

Sounds like an infomercial, doesn’t it? It’s actually the intro to A&E’s latest in their collection of redneck families who happen to be in the dough. If you like Duck Dynasty, this show was made for you. It’s another one of those eccentric families in the outdoors business. With names like Uncle Hard Luck, these guys fit right in with the Robertson family over at Duck Dynasty. In fact, they’re buddies, and Willie guests in the pilot episode. He’ll also pop up later as well. It’s the whole A&E family of outdoorsmen as Swamp People’s favorite Troy “Shoooooot” Landry comes by a couple of times to visit. It’s more down-home reality television and “accidental” humor.

Matt and Ryan are brothers. Matt appears to handle the business side of dollars and cents. He’s actually the most seldom seen member of the family. Ryan is the idea man who is supposed to come up with their next million-dollar jackpot. Yet the show features the antics of Uncle Hard Luck the most. He’s your down-home humor without a clue…except when he seems to have one. Most of the episodes center on one of his scheme ideas that have a somewhat smart genesis but go completely off the deep end. Ideas like Sac-Attack, which is an undergarment with a pocket to keep deer urine warm. He has an idea to zip-line into a blind. Not really a bad idea if it were tree-to-tree. His 5D camouflage I still don’t quite understand. No doubt Hard Luck is making a career out of making a fool of himself. He’s the kind of guy who would make Rodney Dangerfield feel good about himself. He’s supposed to be the company’s product tester, but that doesn’t really sound like a good idea either.

The cast is rounded out by Bill Busbice, the brothers’ father and “King” of the family estate. He doesn’t do much in the show, however, but react. His wife and the boys’ mom is Beth. There’s also T-Carr. He’s not a family member, but the manager of the ranch. He ends up getting swept up in Hard Luck’s crazy ideas in most episodes.

The family business is hunting supplies, most notably deer hunting supplies. They sell bait feed that looks like dirt so rival hunters won’t catch on to your perfect spot. An entire episode consists of rival cast members making a commercial for the product. They appear to specialize in crossbows, which feature in almost every episode. For experts in the field, you would think they’d know the difference between an arrow and a bolt. They do not.  They also use the ranch for celebrities and the rich to hunt on the private reserve. This season finds country musician Jason Aldean coming to the ranch to hunt and being hijacked by Hard Luck so he could pitch his ideas. I’m ashamed to say I didn’t know who he was.

The episodes are short at about 20 minutes each, as is the season with only six episodes. I suspect the show is intended to give Duck Dynasty fans something to fill their time waiting for new episodes. I just found it the most contrived of all of these shows… and that’s saying something. I just didn’t believe a word of this stuff wasn’t scripted. They give us the comedy relief and left off the rest. It’s a single disc with about 15 minutes of bonus footage, much of it not really bonus. This is strictly for the fans, and I suggest you check it out on A&E before you think about bringing this one home. It’s an acquired taste to be sure, but the Busbice family does provide us with “55,000 acres of redneck heaven”.

Gino Sassani is a member of the Southeastern Film Critic's Association (SEFCA). He is a film and television critic based in Tampa, Florida. He's also the Senior Editor here at Upcomingdiscs. Gino started reviewing films in the early 1990's as a segment of his local television show Focus. He's an award-winning recording artist for Omega Records. Gino is currently working on his 8th album Merchants & Mercenaries. Gino took over Upcomingdiscs Dec 1, 2008. He works out of a home theater he calls The Reel World. Favorite films: The Godfather, The Godfather Part II, The Body Snatcher (Val Lewton film with Karloff and Lugosi, not the pod people film), Unforgiven, Gladiator, The Lion King, Jaws, Son Of Frankenstein, The Good, The Bad And The Ugly, and Monsters, Inc.
Lost For Words Pandas: The Journey Home (Blu-ray-3D)