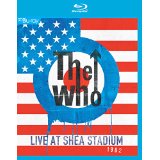 What young 1970’s pup, learning to play a guitar for the first time, didn’t, at one time or another, attempt to imitate Pete Townsend’s windmill power chord strum? I count myself in that group. While I was not a very dedicated Who fan, I had an appreciation for the musicianship. There were still songs like Pinball Wizard and Behind Blue Eyes that I would embrace as if they were my own anthems in those days. It would be hard to deny that The Who is one of the most successful rock bands in history. Part of the original British Invasion of the 1960’s, there are few such acts that are even still around, let alone able to fill the huge stadiums and halls of Rock’s yesteryears. Their songs have become anthems, and their antics have become legend. The band wrote the soundtrack for an entire generation, and proudly touted the fact in aptly named song, My Generation. Banned from all Holiday Inns at one time for their well publicized trashing of rooms, they weren’t any easier on their own instruments. Smashing their instruments and amps on stage became a staple, for a while, of the whole Who experience. They’ve inspired a legion of superstars, and now after more than 40 years of rocking, they soldier on.

Their influence goes beyond just rock music. All three of the CSI franchise shows sport Who songs for their opening credit sequences. They’ve been lampooned on South Park and The Simpsons. They were once referred to as The Band That Wouldn’t Go Away, and that was more than 30 years ago. And it was about that time just a little over 30 years ago that the band performed a legendary show at New York’s Shea Stadium. Looking at the Mets abysmal 65-win season in 1982, it looks like The Who might have had more hits there than the baseball team.

The 1982 tour was the last tour for drummer Kenney Jones, just as the earlier Eagle Rock release featured one of Keith Moon’s final shows behind the skins. Jones would join the guys at Live Aid and a couple of shows throughout the years, but never again for a full fledged tour.  It would also be the final chance to catch the band for another seven years. The Who was never a frequently-touring band, so all of these concerts were usually something special. The truth is this was their first farewell tour. They intended to stop touring. Of course, no one believes that any more. I’ve been to three Elton John farewell concerts and saw Brett Favre come out of retirement enough times to fall for any of that.

This was October 12th & 13th, 1982. The band appears somewhat more conservative in their dress than previous years. Daltrey is particularly so in a silver suit coat. John Entwistle lives up to his Quiet One reputation by keeping mostly in the background. Daltrey manages to belt out the favorites, but by then he was already feeling the strain of the tour and had to watch the high tones a bit. Still, the band delivered a solid performance that will be the highlight of any Who fan’s collection. There have been plenty of boots out there for this concert in the last 40 years, but Eagle Rock does a great job of delivering both sound and image. It’s upconverted standard definition, but it looks rather nice. The sound is CD quality or better with nice bass response.

One of the odd aspects of the show is that Townsend appears to be openly smoking pot on the stage, and the effects are pretty obvious. There’s some stumbling. His eyes are quite bleary, and he’s delivering the craziest smiles you’ve ever seen. He mumbles some phrases that don’t appear to make a lot of sense such as “eye of the tiger”. Whatever his condition was, it never effected one note of his performance. The guitar work is flawless.

Here’s the set list included, taken from both nights:Substitute

The Punk And The Godfather

Cry If You Want

See Me Feel Me

I Saw Her Standing There

There are a few bonus tracks from other shows:

A Man Is A Man

The song selection is pretty good. Most of my favorites were included, but any band knows you can’t please everyone. The only disappointment might have been there were was only one track from Face Dances, which was just released along with It’s Hard around the time of the tour. I think Face Dances is their most under-rated record and remains one of my favorites. There’s not a bad track on the record. The Who found the perfect level of rock for generations and here competed with the punk genre. They managed to instill intelligence into their music while “everybody else is too loud”.

Gino Sassani is a member of the Southeastern Film Critic's Association (SEFCA). He is a film and television critic based in Tampa, Florida. He's also the Senior Editor here at Upcomingdiscs. Gino started reviewing films in the early 1990's as a segment of his local television show Focus. He's an award-winning recording artist for Omega Records. Gino is currently working on his 8th album Merchants & Mercenaries. Gino took over Upcomingdiscs Dec 1, 2008. He works out of a home theater he calls The Reel World. Favorite films: The Godfather, The Godfather Part II, The Body Snatcher (Val Lewton film with Karloff and Lugosi, not the pod people film), Unforgiven, Gladiator, The Lion King, Jaws, Son Of Frankenstein, The Good, The Bad And The Ugly, and Monsters, Inc.
We Are Monster Me Earl and the Dying Girl