Me Earl and the Dying Girl

Posted in: The Reel World by Archive Authors on July 1st, 2015 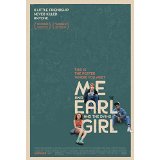 Me, Earl and the Dying Girl is not the perfect movie by any means, but it is pretty darn good. Sometime it is too clever for its own good, and sometimes its cleverness is what makes it good. It is a movie about a precocious high school teenager much in the tradition of Ferris Bueller’s Day Off. It has an offbeat and anarchic take on the high school experience, because the titular Me is giving his point of view. As with many narrators in the tradition of literature, his opinions can be unreliable. Me shall be known from now on as Greg (played by Thomas Mann) (no relation to the famous German novelist) (which I mention because German film maker Werner Herzog is all over this film). One of the things that Greg says that can’t be relied on is when he talks about the dying girl who shall be known as Rachel (Olivia Cooke). In fact, Greg tends to say lots of things that he doesn’t really believe. He has accepted the role of the beaten-down loser who has figured out a way of being relatively invisible and getting along with everyone. Rachel just might screw up that master plan.

Greg’s mom (Connie Britton) and Rachel’s mom (Molly Shannon) think it’s a great idea if Greg spends time with Rachel (since she’s dying after all). Greg thinks it sucks but goes along with it anyway because he’s a fairly wishy-washy guy. Rachel is suspicious right off the bat and Greg basically begs her to do this or his mom will make his life miserable. She grudgingly goes along. They become friends despite all this.

I haven’t mentioned Earl yet. Earl is Greg’s coworker. That isn’t really true, but that’s what they tell each other. The make deliberately stupid movies that they want no one to see. They decide to make their 43rd film for Rachel. Some of the titles of the other films are Anatomy of a Burger, Ate ½ (of my Lunch), Crouching Housecat, Hidden Housecat, Death in Tennis, My Dinner with Andre the Giant, Eyes Wide Butt, Gross Encounters of the Turd Kind, etc. I think you get the idea. They are joky remakes of existing films. Earl is also black, which becomes important later in the story.

The film is an indie success story already. It has an indie feel (which mean it doesn’t have that Hollywood stink on it). It also has the fairly unique distinction of winning two major awards at the Sundance Film Festival (Grand Jury Prize and Audience Award) (though Whiplash and Fruitvale Station had the same distinctions in the last two years).

Everything about the movie has a distinctive feel. (I’m tempted to say quirky.) It was filmed in Pittsburgh, and they make fantastic use of numerous locations there. The high school itself is wonderfully beat up. The camera work is both subtly inventive and dramatically daring.

The cast is fantastic, including Nick Offerman as an unconventional dad and Jon Bernthal as the rebel-at-heart, rough-edged history teacher.

Some people might have problems with the tone of the film. It veers radically from light to dark, comic to tragic. One of my favorite things about the film is the stylistic and tonal chances it takes. It thinks nothing of an extended dramatic scene being done in one long take and then wedging tons of joky cuts and offbeat framing to some of the coverage.

The film is essentially a comedy that is constantly threatening to become a very special episode of your favorite sitcom (meaning that it’s going to get all sad and weepy). I happen to like sad and weepy movies, so I will say I enjoyed both sides of this film. But the title pretty much states what’s going on.