I Am Evel Knievel (Blu-ray) 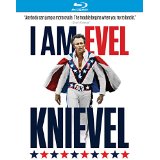 “Anybody can jump a motorcycle. The trouble begins when you try to land it.”

There’s a segment in I Am Evel Knievel that features some of Knievel’s contemporaries — along with a few of the younger extreme sports athletes he inspired — breaking down just how difficult it is to jump a motorcycle across vast distances. (Especially when you’re using relatively primitive equipment the way Knievel was.) Long story short, the crucial components are guts and a mental makeup that doesn’t allow you to overthink or dwell on the insanity of what you’re about to do. This entertaining documentary succeeds in illustrating how Knievel had both of those qualities in spades.

“He didn’t have a death wish. He had a life wish, man. It wasn’t even a wish…he was doing it.”

Robert Craig Knievel was born in Butte, Montana in 1938. He was a thrill-seeking hellraiser during his high school days, so it didn’t take him long to turn “Evel.”(He acquired the nickname during a night in jail.) The film tracks his early days in Butte, his time as a barnstorming daredevil, and his transformation into an American icon. It even skims through Knievel’s retirement years and his funeral following his death in 2007.

That’s a lot of material for directors Derik Murray and David Ray to burn through in 94 minutes, but the filmmakers do quite a nice job of giving each period of Knievel’s life its due while putting his accomplishments in a broader historical perspective. For example, Knievel and his signature red-white-and-blue leather jumpsuit came to prominence during the mid-to-late 1960s, when parts of the country were torn over the Vietnam War. As a result, his exploits were an unabashed blast of patriotism and a celebration of a particularly American “can do” attitude.

But despite his superhuman exploits — the man was flying across the sky! — Knievel also represented a very human and relatable fallibility. The film points out that it wasn’t totally clear whether people were showing up and tuning in to watch him succeed…or to watch him crash spectacularly. Knievel obviously isn’t around to speak for himself, but the movie includes a fair amount of archival interview footage and secondhand anecdotes that show he was, above all, a canny showman capable of capitalizing on both his successes and failures. (He “retired” after a crash in London’s Wembley Stadium…until he saw the potential for one more redemptive jump on U.S. soil.)

Then again, calling him a “canny showman” might just be a kind way of saying he was a BS artist of the highest order. The first big jump we see in the film is his leap across the fountains at Caesar’s Palace in 1967. There’s a great story about Knievel building up his own legend to get the gig in the first place followed by slow-motion footage of the stuntman wiping out. But even with a shattered pelvis, a concussion, and a laundry list of other injuries, Knievel had enough presence of mind to embellish a story about him being in a coma for 20+ days. There’s also some great old-school footage of the performance that incited a fight with the Hell’s Angels and his famous steam-powered rocket leap over the Snake River Canyon.

Those archival photos and interview clips show that Knievel was a strikingly handsome man with movie star looks and a silver tongue. The documentary, however, also shines a (night)light on the darker aspects of his personality, which includes beating up former inner-circle member Shelly Saltman with a baseball bat after he wrote a tell-all book. The contributors here include Robbie Knievel (Evel’s daredevil son), Kelly Knievel (another son and a producer on the film), and Evel’s first wife Linda, so it’s not surprising to see that the film doesn’t outright condemn some of his actions. (Linda still looks a bit smitten as she talks about first falling for Evel…and knowing that he had many girlfriends on the road.) But even Evel’s more egregious and head-scratching indiscretions — from robbing banks in his youth to running a golf scam with his second wife Krystal during his twilight years — are mostly treated with a “boys will be boys” shrug.

Of course, that could be attributed to Knievel’s force of personality just as easily as it could be blamed on biased filmmaking. The documentary also includes famous faces like Matthew McConaughey (everything he says is gold), Michelle Rodriguez, Kid Rock, and Guy Fieri, along with Knievel biographer Steve Mandich and lively storytellers/Knievel colleagues like fellow stuntman Gene Sullivan and crew chief Ray Gunn. The celebrity list may seem random (because some of it *is* random), but it goes to show the far-reaching cultural impact Knievel had.

It’s also oddly fitting to have these various performers show up. Knievel may not have been much of a movie star — his “acting” in 1977’s Viva Knievel is deservedly skewered — but he thoroughly succeeded in creating larger-than-life character in the real world and milking the part for everything it was worth.

I Am Evel Knievel is presented in an aspect ratio of 1.78:1. The 1080p image is arrived at with an AVC MPEG-4 codec at an average of 18 mbps. From a visual standpoint, this is pretty standard documentary fare with talking head interviews alternating with older archival footage. You get the sense of this disc’s HD bona fides during the modern interview segments, which feature pleasing sharpness and zero blemishes. Many of the subjects were interviewed in settings meant to evoke a garage or auto shop, so there are actually some solid black levels and shadow detail at play here. The archival footage is faithfully represented and varies in quality; some of it has more scratches and blemishes than other parts, but it’s all pretty passable.

The DTS-HD Master Audio 5.1 track is dialogue heavy and only offers standout moments in spurts. The rears merely serve to echo the musical cues from the front speakers and don’t really offer much in the way of immersion. Subs pipe in briefly during the slo-mo presentation of the Caesar’s Palace crash — we hear heartbeat sounds — but otherwise aren’t really heard from at all. The good news is dialogue, the main thrust of this track, is clear and well-balanced throughout.

Evel Knievel Lives On: (4:50) Lathan McKay, curator of the Evel Knievel Collection, talks about his adventures gathering some of the legend’s merchandise and shows off a few choice pieces. (Including the helmet from the Wembley Stadium crash.)

Inspired by Evel: (15:19) Knievel’s influence is evident on everything from the X-Games to any knucklehead who briefly becomes a YouTube star following a calamitous fall. Robbie Knievel, along with extreme sports athletes Jolene Van Vugt, Robbie Maddison, Alex Harvill, and Mike Vallely, chime in during this segment.

With apologies to Matt Murdock and his superhero alter ego, the original daredevil was Evel Knievel. His heyday was before my time, so a lot of this footage was new to me. (Just like I suspect it’ll provide a nice kick of nostalgia for anyone who grew up watching him on TV.)

In the end, this documentary — which originally aired on Spike last year — is a pretty good survey of the man’s life and career.

Me Earl and the Dying Girl Contest: Win Debug From Ketchup Entertainment