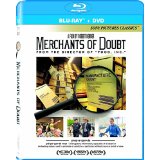 The “I’m not a _____, but I play one on TV” catchphrase transcended its humble origins to become the go-to, jokey line for anybody who feels empowered to speak outside their area of expertise. Merchants of Doubt, however, isn’t concerned with soap opera actors trying to sell Vicks on television. Instead, this flashy, funny, well-researched documentary examines the select group of people who present themselves as scientific authorities to the public. It also argues that they purposefully create confusion with the goal of maintaining a very lucrative status quo.

Early on in Merchants of Doubt, we meet Stanton Glantz, a leading tobacco control activist. We see a late 1980s clip of the schlubby, bookish Glantz — who looks like someone born to be played by Albert Brooks — getting berated on The Morton Downey, Jr. Show. The present-day Glantz talks about receiving a treasure trove of internal documents from a disillusioned tobacco industry insider one day. The documents were followed by lawsuits, which eventually unearthed evidence that Big Tobacco was well aware of the harmful effect of its product, even as it aggressively marketed cigarettes to the public at large.

“My expertise is deception.”

Just as importantly, the documents also shone a light on Big Tobacco’s strategy for dealing with this serious threat to their bottom line: they hired a PR firm. As a result, a very distinct playbook emerged. Instead of outright denying the harmful effects of tobacco, advocates for the industry were encouraged to cast doubt (“We don’t know…if cigarettes are harmful”) in an effort to delay government regulation — and keep their gravy train running — for as long as possible. Merchants of Doubt posits that other facets of the corporate world (Big Oil, chemical companies) adopted the tobacco industry playbook to similarly cloud issues like global warming and the effectiveness of flame retardants.

Merchants of Doubt is “inspired by” the 2010 non-fiction book of the same name by Naomi Oreskes and Erik M. Conway. Both the book and the movie draw a straight line between the current global warming controversy and past hot button issues involving acid rain, the tobacco industry and more. Oreskes (who also appears in the movie) and Conway are “science historians,” which I honestly didn’t even realize was a thing until I saw this movie.

Oreskes said she was spurred by the uncertainty surrounding global warming to try and find some sort of consensus among the scientific community. She examined 928 papers over a 10-year period written by active scientists with relevant credentials to see how many of them agreed or disagreed with the notion that the Earth’s climate has been affected by human activities. The resulting article was called “The Scientific Consensus on Climate Change” largely because none of the articles disagreed.

“Misdirection…is about bringing your attention to something that engages you. Then you don’t see anything else.”

Director Robert Kenner (Food, Inc.) likens the tactics used by “pundits-for-hire” — who argue the opposite side of these issues — to those used by magicians. He enlists sleight-of-hand master Jamy Ian Swiss to explain to explain some of the tricks of the trade. (Swiss calls himself an “honest liar” because his audience is actually looking to be tricked.) I understand why Kenner used the magic motif; it certainly livens up the documentary from a visual standpoint and it’s a fun entry point into what is otherwise a rather dry subject.

These sequences are mostly useful in understanding the psychological reasons pundits-for-hire are so effective. (Like cultivating an “us against them” tribal mentality on key issues.) The film argues they also appeal to the human urge to resist the wholesale lifestyle changes that “inconvenient” science demands. (An electric car costs how much?!) And on a much simpler level, these “merchants of doubt” are often slicker, more charismatic personalities than their drier counterparts.

One of the film’s standouts is Marc Morano, who is gleefully unapologetic about posting climate scientists’ email addresses in an open forum, which led to them receiving death threats. (Conversely, there are scientists like James Hansen, who bowed out of the limelight years ago and admitted to feeling awkward in his role as a public figure; Kenner unearths footage to back that up.) The film implicitly makes the case that the merchants of doubt basically function as defense attorneys for their respective industries; Morano admits he doesn’t actually advocate for anything…he simply works as a “negative force” for change.

But to me, the best and most eye-opening sequences in Merchants of Doubt are the bits that take a closer look at some prominent figures in the scientific community. There’s Bill O’Keefe, head of a prominent Washington D.C. think tank even as he was a registered lobbyist for ExxonMobil. The film also suggests that renowned scientists like Fred Singer and Fred Seitz — who renounced everything from global warming to secondhand smoke — were more philosophically opposed to increased government regulation than they were to any one cause. (To their credit both O’Keefe and Singer appear in the film; when asked what advice he would give environmental groups, O’Keefe quips that they couldn’t afford him.)

The film has a lot of interesting material — I haven’t even mentioned the stories of global warming skeptics-turned-believers Michael Shermer (founder of The Skeptics Society) and Bob Inglis (the South Carolina congressman who was trounced in the election following his about face on the subject). However, I do wish the documentary hadn’t focused so heavily on the issue of climate change. I get why Kenner went this route — the thesis here is that it took 50 years for Big Tobacco’s lies to be found out, and that the planet doesn’t have that kind of time — but it’s at the expense of other interesting topics the movie only hints at. This includes the story of Chicago Tribune journalists Sam Roe and Patricia Callahan, who helped unearth some fraudulent claims made by the companies that make flame retardants. Beyond the other unexplored industries that have their own “merchants of doubt,” the movie passed on exploring how the media has — unknowingly, in many cases — contributed to helping build up and legitimize fake experts. (In the quest to give equal consideration to both sides of an issue, even a responsible journalist can inadvertently elevate a phony scientist to the same level as a real one.)

Then again, if I feel a bit short-changed by Merchants of Doubt it’s only because it fired up my imagination to learn more about — and look closer at — a subject I find endlessly fascinating.

Merchants of Doubt is presented in an aspect ratio of 1.78:1. The 1080p image is arrived at with an AVC MPEG-4 codec at an average of 25 mbps. Right off the bat, it’s obvious this is an uncommonly cinematic documentary. The opening sequence at the Magic Castle is dominated by deep black levels and velvety reds that come off looking very rich in this Blu-ray from Sony Pictures Classics. In fact, the detail is so good, you can see some of the seams in the not-quite-top-notch special effects shots during the opening credits. The rest of the film is the usual mix of full screen archival footage (presented very faithfully) and some striking-looking modern day interviews with warm tones and impressive clarity.

The DTS-HD Master Audio 5.1 track is pretty standard for documentary fare, with a clear emphasis on dialogue. (Which is always totally clear and well-balanced.) Mark Adler’s jaunty score and a few cheeky musical choices (like David Bowie’s “Ch ch changes” soundtracks a montage of flip-flopping politicians) get a surprisingly full-bodied treatment in the surround sound field. But besides some stray ambient noises during brief outdoor sequences and some echoing in the rears, this track goes about its business quietly and efficiently.

Commentary with director Robert Kenner: This is an absorbing listen just for the stuff that didn’t make it into the final cut. (Like including the fact that Morton Downey, Jr. got lung cancer late in life and became an anti-smoking activists.) There are also incredible anecdotes, like a former “Winston Man” saying that tobacco executives refused to smoke their own product because it was only for “black, poor, and stupid people.” Kenner also talks about coming up with the magician conceit halfway into production.

An Evening at the Toronto International Film Festival with Robert Kenner: (17:44) There’s footage of Kenner at TIFF introducing the film and doing a post-show Q&A. He talks about being inspired to make this film (about the poisoning of minds) during the course of making Food, Inc. (the poisoning of the body). Kenner mostly strikes a hopeful tone, even as he concedes a significant number of people will dismiss his film on principle.

Unlikely Voices: (5:24) This special feature functions as the disc’s deleted scenes. They include a Tea Party “right wing radical” (her words, not mine) pushing for solar panels in Georgia, former Secretary of State George Shultz (a cabinet member under President Reagan) and his electric car, and the Swiss Re global reinsurance company, which fears it won’t be able to insure climate-related catastrophes as they become more frequent. Features a Play All option.

Merchants of Doubt takes a satirical look at a very serious subject. (For extra, unintentional laughs, there are several clips featuring disgraced anchor/noted liar Brian Williams.) I felt the relatively lighthearted tone was justified by some of the “theatre of the absurd” tactics illustrated in the film. (The film mentions the Oregon Petition, which urged the U.S. government to reject international treaties like the Kyoto protocol that aimed to reduce greenhouse gas emissions. The petition was eventually revealed to have numerous duplicate entries, along with signatures from noted scientists like Dr. Michael J. Fox, Dr. Perry Mason, and Dr. Geraldine Halliwell.)

Again, I wish the film had broadened its scope beyond the issue of global warming. I’m not going to waste too much time fretting about a more even-handed approach since it’s no surprise that a politically-minded filmmaker like Kenner would inject his own views.

More importantly, the bottom line is I would absolutely watch a counter/companion piece to this film — one that placed the same level of scrutiny on the scientists and public figures this movie champions — if it were done with the same combination of style and substance.