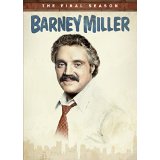 In 1976 a New York media group conducted a survey of the NYPD detectives. The question was: “Of all the TV cop shows, which most accurately portrays life as a detective?” The overwhelming response was the comedy Barney Miller. Seems real cops related to the daily grind and weekly wackos of Barney Miller. Let’s not put aside that this was also one of the most consistently funny shows on television. I remember it took me a while to accept Abe Vigoda in such a light role as Fish. My first exposure to Vigoda was the ruthless mobster in The Godfather. Barney Miller always managed to be funny while still telling a good short story. The characters were always wonderful.

Captain Barney Miller (Linden) was in charge of the detective squad at New York’s 12th Precinct. Among his detectives were a colorful group of odd individuals. Detective Ron Harris (Glass) wrote a book that detailed his life as a New York detective. It was called Blood On The Badge and was far more fiction than fact. He prided himself on his stylish clothes and culture. Arthur Dietrich (Landesberg) was a know-it-all. He had an almost encyclopedic base knowledge on everything and anything. He would bore his colleagues with his endless drone of facts. Stan “Wojo” Wojciehowics (Gail) was the typical New Yorker everyman. He might not have been the sharpest tool in the box, but he more than made up for it in heart. At times his desire to show initiative would end up getting the squad in trouble. From time to time the squad would be visited by the clueless Inspector Luger (Gregory). He often reminisced about his glory days and often expressed regret that he didn’t go down in a blaze of glory like his old friends had. Fans knew the names Foster, Kline and Browning as three of Luger’s old buddies who were long since gone. He was usually intruding upon the squad’s time with long, pointless stories. Finally, patrolman Levitt (Carey) was an ambitious uniformed officer who wanted to become a part of the squad, which he eventually did.

The final season of Barney Miller had far more continuity than was usual for a sit-com of the time. There were a few running stories that included Luger getting Barney to write for an Asian bride. It led to the short appearance of Perlita, played by Carina Afable. The last episode is broken down into three parts. The final scene gives homage to the actors no longer on the show, with a particularly moving salute to Jack Soo. The precinct also gets a visit from a few of the memorable recurring characters.

This disc is completely loaded with extras. There are a few short features that include plenty of recent interviews with surviving cast members. The interviews have more meat than most, and you’ll discover some things anew even if you’re a long-time fan. You get the original failed pilot that featured Hill Street‘s Charles Haid and Quincy‘s Sal Bisoglio in parts that were recast later. The original show was called The Life And Times Of Barney Miller and was to spend equal time on Miller’s home life. His wife would also be recast, and some of the home life material survived the early seasons. You also get the unreleased, uncut version of the pilot that aired. It’s the same story but with the mentioned recast parts that carried over into the series. You’ll be able to compare them for yourself. Finally, there’s a short segment of the Jack Soo tribute that aired in place of an episode when the actor passed away. The actors spent the time talking about the actor and sharing their favorite memories. This is a loaded release. A nice send-off for a classic show.

These were the days when watching Barney didn’t involve a purple dinosaur. I really liked this show. This is one of those treasure chest gems that I look forward to on DVD release schedules. You’ll laugh, you’ll cry (when you run out of episodes), and you’ll be waiting for the next season to come with great anticipation. But alas, as the fans discovered back in 1982, there are no more DVD releases to follow. This is the final season. There won’t be any more. “So what are we going to do now?”

Gino Sassani is a member of the Southeastern Film Critic's Association (SEFCA). He is a film and television critic based in Tampa, Florida. He's also the Senior Editor here at Upcomingdiscs. Gino started reviewing films in the early 1990's as a segment of his local television show Focus. He's an award-winning recording artist for Omega Records. Gino is currently working on his 8th album Merchants & Mercenaries. Gino took over Upcomingdiscs Dec 1, 2008. He works out of a home theater he calls The Reel World. Favorite films: The Godfather, The Godfather Part II, The Body Snatcher (Val Lewton film with Karloff and Lugosi, not the pod people film), Unforgiven, Gladiator, The Lion King, Jaws, Son Of Frankenstein, The Good, The Bad And The Ugly, and Monsters, Inc.
Slow West Fight of the Living Dead