Fight of the Living Dead

Posted in: No Huddle by Archive Authors on July 9th, 2015 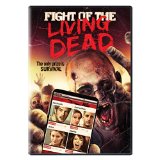 There is no real story here. This is set as a competition/reality TV Series. The goal is for one team of survivors to get out of an infected zombie prison. The twist is that the contestants are all YouTube personalities. They must first get out of the room they wake up in, then go to get an antidote, then give the antidote to a doctor, then get out of the facility. The concept for this was intriguing, but the application was sloppy at best. During the entire production you are reminded of how low-budget this series is, whether you are listening to the overly cliché horror music or getting motion sickness from the camera. First the music: the music reminds me of the same backdrop I could hear in a thousand other straight-to-DVD horror movies or reality TV series (like listening to the music in Killjoy, mixed with the music from Hell’s Kitchen). After listening to it for a 51-minute runtime, it became akin to nails on a chalkboard. Now to the camera work: the camera switched from looking like security camera footage, to cell phone video, to actual movie camera; this way of filming made the action hard to follow. Half the time I didn’t recognize which team I was following; the other half of the time I was annoyed at the people participating and didn’t care which team I was following. I can understand a budgetary constraint, but people have done more with less (like Kevin Smith with Clerks).

Even worse are the YouTube personalities they picked. The contestants switched from treating this like a real zombie apocalypse to treating it like a joke. Some contestants view it as hilarious, some view it as an opportunity to help their YouTube series get subscribers, and the rest of the cast actually take it seriously. Unfortunately, none of the people taking it seriously are actually competing, all just extras.  Sure, the people competing are YouTube personalities who have a following, but I wouldn’t pay the price of a DVD to see them compete in something that turned out like this.  This series is like a low-rent Survivor, mixed with no real film crew, containing a few people that don’t even know how to pretend that they are interested in this. An even better comparison for this is: it’s like watching people go through a zombie 5K run, but they expect people beyond their friends and family to care.

In the end, you have to really love the You Tube personality you are following to even consider getting this movie on DVD. This series is so bad I find it hard to believe that it is actually an option. Just save your money.