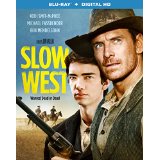 There’s a moment about halfway through Slow West where the two main characters partake in some absinthe. What follows is a disquietingly vivid dream and our two “heroes” essentially wobbling around until sobering up the next morning.The sequence is actually a pretty perfect encapsulation of what it feels like to watch Slow West, a woozy and refreshingly off-center entry into the Western canon.

“Once upon a time, 1870 to be exact, a 16-year-old kid traveled from the cold shoulder of Scotland to the baking heart of America to find his love.”

The kid is Jay (Kodi Smit-McPhee), a high born youngster who is gazing up at the stars with wonder when we first meet him. Jay has traveled from Scotland to America in search of Rose (Caren Pistorius), the lovely young woman who had to flee their homeland with her father (Rory McCann) after a tragic accident that Jay feels responsible for. The guileless Jay soon crosses path with a ruthless man named Silas (Michael Fassbender), who violently gets the younger man out of a jam and agrees to be Jay’s paid chaperone in his search for Rose. We soon learn there’s a bounty on Rose and her father, which means Jay is unwittingly leading a killer right to them. Silas has some competition in the form of a bounty hunter who takes on the disguise of a priest (Edwin Wright). There’s also the group of bounty hunters — led by the menacingly flamboyant Payne (Ben Mendelsohn, underused in a live wire performance) — that Silas used to run with.

All the parties converge in a ferocious final act that is equal parts bleak and badass. But that’s just the destination. What largely sets Slow West apart is how it arrives at that shoot-em-up finale. It’s tempting to say the film lives up to the first half of its title because of the seemingly random digressions that trip up our laconic leads. However, those quirky sidebars are what set Slow West apart from the traditional Western and give it an unpredictable jolt.

You always hear about the “wild west”, but director John Maclean — the former Beta Band member making his feature film debut — has made a movie where it truly feels like anyone could put two bullets in your back. (I mean, even the mellow traveling writer can’t necessarily be trusted.) Of course, some of the digressions work better than others — a tense visit to a general store makes an earlier, fireside drum circle seem pretty pointless by comparison — but they each serve to illustrate the breadth and diversity (Scots, “injuns”, black people) of early America. (Naturally, Slow West was filmed in New Zealand.)

Maclean, who also wrote the film, and cinematographer Robbie Ryan use some of the familiar, panoramic shots of the American West, but they also mix in some hyper deliberate Wes Anderson-esque composition. The latter gives the film a deadpan quality that makes the violence seem more matter-of-fact than cinematic. (Right before the end credits roll, there’s a mournful survey of every person in the film who was killed.) Then again, the deadpan presentation also makes things funnier.

I should absolutely mention Slow West has a dark, quirky sense of humor. (There’s a brilliantly on-the-nose moment during the final shootout where a jar labeled “Salt” gets shattered and its contents land on top of a character who has been fatally wounded.) And remember that mournful survey of all the movie’s dead bodies? Well, one of them is shown to be in a pretty undignified position, which is likely to wring a chuckle out of what is otherwise a sobering sequence.

It’s a good thing the movie has so much personality, because it’s otherwise a pretty simple story. Fassbender (also a producer here) is the brutish, no-nonsense counterpoint to Smit-McPhee’s lanky, hopeless romantic. (Flashbacks reveal precisely how hopeless.) Fassbender has the requisite presence to help sell a rather thinly sketched character, but I was more taken with Smit-McPhee’s understated oddness. (Jay talks about how there will one day be a railway between the Earth and the moon, which makes him seem like a literal alien instead of just a figurative one.) The dramatic tension comes from the bond they form and whether Silas will go through with collecting the bounty. But while the two performers are solid, the 84-minute film didn’t fully flesh out their connection enough to make me buy that as the central conflict.

Still, Slow West is worth a look. I realize that applying an off-kilter tone to one of cinema’s oldest genres is potentially off-putting, but this movie does it with enough gritty flair that I’m curious to see what this filmmaker does next.