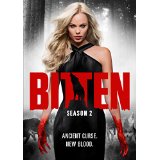 “There was a time when, if you told me werewolves existed that I would have laughed. I don’t laugh at much anymore.”

From the very beginning one can see there is great potential here. The show is based on a collection of books that appear to be popular. They’re called The Outworld series, written by Canadian author Kelley Armstrong. The show avoids most of the standard clichés. There is no full moon reference at all here. The werewolves “change” at will or when emotionally charged (“you won’t like me when I’m angry”). There are no silver bullets. These guys might be stronger and harder to kill than a human, but severe body trauma or blood loss kills them just like anyone else. No pentagrams or wolfbane to be found in the show.

Bitten tells the story of Elena, played by Smallville’s standout actress Laura Vandervoort. Elena is a werewolf who had left her pack behind to try to live a normal life in Toronto. Of course, that was the last season, and any aspect of her normal life is long gone. The show no longer attempts to have the character try to balance the two lives. She is fully engaged in the pack now. The show is at its best when it tells the story from the point of view of Elena. She’s a unique character in this world. She’s the only female werewolf known to ever exist. The idea is that women are not physically strong enough to survive the “change”, and only boys carry the trait genetically. That puts Elena in a rather unique and clever place both for the show and werewolf mythology. It’s enough to carry the series beyond the rather overused plot of a hero trying to escape who or what they are. Vandervoort is also a good enough actress to be interesting, and even at times compelling, in the role. She’s not getting any help here from the writers, cast, or crew. The story appears to be drifting away from Elena as the central character, and that’s not exactly a good thing.

Last season I credited the show for staying away from other supernatural creatures. It’s the fatal step that most of these shows can’t seem to avoid except Bitten…. until now. This season pretty much brushes aside the pack politics to a few throwaway scenes. It’s almost as if someone decided to pretty much abandon that aspect of the show. Big mistake. Now there’s a new big bad, and it’s a witch named Alester (Rogerson). He has something in common with Elena as witches are now introduced to the show. Just as there are no other female werewolves, Alester is the only male witch, and he has an ax to grind with the other witches. He has captured a young witch with great potential power named Savannah (Glasco), and with Elena’s blood he attempts a rite called The Undoing. It’s not a good thing for the witches as they become at first enemies and then allies with the wolves. Meanwhile Jeremy is dealing with the Alpha Council in a story that would have been far more interesting had it been the A story arc. If the witch story sounds familiar, that’s because it is. This looks a lot like the first season of The Originals when Klaus attempted to keep a strong witch for his own purposes. At least on The Originals it was…well…original.

It doesn’t help that the cast is particularly weak, even though the action element was cranked up quite a bit this season. Greg Bryk as the alpha Jeremy literally puts me to sleep. I’ve never encountered such an uninspiring leader before. The other “cousins” are little better. Greyston Holt plays Clay. He’s the one who bit Elena and was a former lover. They’ve been trying to pick up where they left off. I guess you could call them kissing cousins. (Yes, I know it’s just a cover story) He’s got that look down stone cold. But there’s no chemistry between Vandervoort and either of these two actors. Again, that ends up making it harder to suspend belief.

I was a bit impressed that some of the actors did step up this season. Michael Xavier as Logan delivered a much better performance this season. Part of it was that he was given so many better things to do. I was impressed that he was able to raise his game here. It tells me that perhaps these weak performances might have more to do with the writing. Steve Lund as Nick was another of the actors who was able to rise above his first season performance. Again, his character was given so much better material to work with.

Additions to the cast included a pretty solid performance from each of the trilogy of witches. Tommie-Amber Pirie was the best of the three as Paige. The character was able to create great chemistry with Nick, and it was a highlight of the season. Sean Rogerson was OK as the big bad. His game increased when he was working opposite the Elena character. No surprise there.

The werewolves themselves are actually not bad. They do have an obvious CG look to them, necessitated by budget on a small television production. But I rather like the design, and there are some pretty solid facial moments where I saw more emotion than I did with some of these actors. You’ll also notice much more gore and blood this season. They definitely pulled out the horror trends in the story. Most of it looked pretty good. Production values were never an issue with me on this show.

The show appears to be targeted toward a more female audience. Like Teen Wolf, there are a lot of guys running around without shirts. Vandervoort gets her fair share of near-naked and sex scenes, so the guys haven’t been totally neglected. The characters make it a point to strip before changing.

You get 10 episodes (down from 13 in the first season) on three discs. Extras include a short behind-the-scenes feature, 20 minutes of deleted/extended scenes, a gag reel, and a New York ComicCon panel with most of the major players. There’s something called a Gentling Video, and it’s quite bizarre. Not sure what that was all about. I think mostly the number 46. There’s also a stun reel to top off the extras all found on the third disc.

The television landscape has been flooded with shows about the supernatural. Vampires have been particularly hot topics in recent years, but werewolves are starting to get their own sub-genre going. MTV’s Teen Wolf manages to pull the theme off quite well. It’s no surprise that pretty much every network out there wants to throw their own hats into the supernatural ring. It’s getting quite crowded, but the popularity appears to have no end. Of course, with such a crowded field you have to find a way to stand out from the rest. That’s what I was hoping to find. Unfortunately, the results aren’t as impressive as I had hoped. It seems even the studio has lowered their expectations, as the show wasn’t available in Blu-ray this time around. I find it all frustrating, because there are some way-cool elements here. There were absolutely lessons learned and improved going into the second season. If they hadn’t decided to switch tracks so drastically, I think there was more hope for the show. I don’t understand why they did it, but this could be an “Undoing”.

Gino Sassani is a member of the Southeastern Film Critic's Association (SEFCA). He is a film and television critic based in Tampa, Florida. He's also the Senior Editor here at Upcomingdiscs. Gino started reviewing films in the early 1990's as a segment of his local television show Focus. He's an award-winning recording artist for Omega Records. Gino is currently working on his 8th album Merchants & Mercenaries. Gino took over Upcomingdiscs Dec 1, 2008. He works out of a home theater he calls The Reel World. Favorite films: The Godfather, The Godfather Part II, The Body Snatcher (Val Lewton film with Karloff and Lugosi, not the pod people film), Unforgiven, Gladiator, The Lion King, Jaws, Son Of Frankenstein, The Good, The Bad And The Ugly, and Monsters, Inc.
Fight of the Living Dead Self/Less