Posted in: The Reel World by Archive Authors on July 9th, 2015 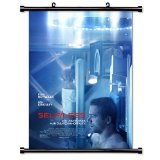 Big blockbusters rule the summer. Sequels and reboots and remakes are demanded by a public that wants sure things. There are no sure things any more, but the big Hollywood studios try to form committees that take as much chance out of the equation as possible. But even in the middle of a summer ruled by big blockbuster, there is a school of thought that counter programming can work. You have to give the makers of Self/Less credit for releasing a non-sequel and one with such an odd title. Self/Less stars Ryan Reynolds and Ben Kingsley, which is an odd but interesting pairing. But it is an awkward pairing, and they don’t share any words in the film, because they share a body. Reynolds has done this kind of thing before in the movie The Change-up with Jason Bateman. In Self/Less, Kingsley plays a billionaire who is dying. He coughs up $250,000,000 to get a new body in a process called shredding. If you have $250,000,000, you can get just about anything.

Kingsley plays New York Real Estate developer Damien Hale, who has one of the gaudiest and glitziest apartments imaginable (in the Trump Towers). He also sports a New York accent that reminded me of Dustin Hoffman. When he coughs up blood one too many times, he coughs up the money to a super-secret medical genius Albright (Matthew Goode), who provides the cutting-edge miracle cure. Damien is shuttled from New York to New Orleans where he will be killed and then reborn. He has a public death and is then smuggled to a remote warehouse where the clandestine facility is located. It gives off the vibe of being a highly illegal operation, which it is, but that’s only half of it. Albright claims the replacement bodies are grown in the lab, but he’s lying. These are not new bodies, but slightly used.

The body that Damien claims is now called Edward, but he actually has another name; we’ll get to that later. So Edward has a huge bank account and nothing to do but go out and bed endless women and play basketball. He has to take pills to manage a certain amount of trauma inherent in the process of dying and getting reborn. (I hate when that happens.) If he isn’t perfectly punctual in his pill-taking, then he might have bizarre hallucinations. Edward is suspicious of the hallucinations and googles what he saw. It sends him to St. Louis. Albright doesn’t like that.

The movie turns into a Bourne Identity-type action movie. It turns out Edward was someone before he was Edward and Damien. It turns out Edward/Damien was a special forces super soldier in a past life with a still-living wife and daughter. He made a deal to die to make big bucks to save the life of his severely ill daughter.

The confusing ethical levels involved with these characters get hard to juggle. Ultimately the most ethically-challenged person is our miracle healer, who is closer to a snake oil peddler but justifies his actions by saying he will eventually be able to do what he promises, so it’s all OK. Damien becomes less creepy and Damien-like the longer he’s in Edward’s body. Even he realizes that it is morally challenged to have someone else die so he can live longer.

Self/Less suffers from not truly exploring the ethical and moral implications fully. They become secondary to the goal of making this a competitive action picture in the blockbuster mold. It also tries to become a tear-jerking family drama as well in its final reel.

Ryan Reynolds is always likable, hardworking, and effective in every role he gets. I just wished that he got movies that were worthy of him. As an actor, he’s far too selfless.