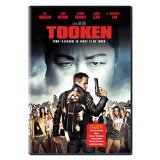 I’m really over parody movies, and this one is no exception. The cheesy dialog and recycled storylines from more popular movies fail to strike a chord with me. Is it just me, or does it seems like parodies are nothing more than the bullies of the film industry? Makes sense, right, seeing as their sole purpose is to poke fun at other movies with no originality or real substance to them. Well, in the case of Tooken, it appears that we have run out of movies to parody and are resorting to people. Well, not people per se, merely characters brought to life by the same actor; I won’t mention which actor. However, that part should not be that difficult for you to guess once we dive a little deeper.

Tooken centers on Brian Millers (your first clue), a retired CIA operative whose life has life has taken a decline. He works as a mall security guard, his wife has divorced him and is shacking up with a new guy, and his daughter is at the full mercy of her hormones. Let’s hit pause for a second; now, from the provided information you should be able to piece the together who the target of this parody is, that is if you were unable to decipher it from the title. Brian finds himself entangled in a plot involving a group of Albanians, all the while attempting to win back his wife and protect his daughter from essentially herself. Truth be told, too much time was spent on the family dynamic rather than the overall plot. The first half of the movie is a long drawn out version of what the original movie summed up in like fifteen minutes. Watch Brian attempt to win back his wife, and the unprovoked beatings of his daughter’s boyfriend are mildly entertaining but become tedious with each repetition.

The film creates a parody of mainly one film, which is slightly confusing given that most parodies are mixture a several movies in one particular genre, but this seems to be mostly about one movie. There is a part on plane (I’ll let you figure which movie that is from) in the beginning except it was just a brief addition and didn’t come up again. Perhaps the addition of similar movies could have opened up more subject matter and allowed for exploration of more interesting avenues.

I won’t be overly harsh about the movie; the experience is not completely bad. I will admit that there were occasion when I laughed out loud; however, it was usually in regard to how ridiculous I found a certain situation or more to do with the way a line was said. Still, a laugh is a laugh, and I do not doubt that the film will be able to coax a few laughs from its audience in the 13-17 and 18-23 demographic. Sadly, I believe I may be slightly too old to fit into the targeted demographic.

Warning: If you are over 25 years old, it is doubtful that this movie will resonate with you. If you are under the aforementioned age, you may find this film mildly enjoyable and very forgettable soon after the credits roll. I believe that pretty well sums up the experience. This is an age-specific movie in my opinion. Once you reach a certain maturity level, interest in a story such as this fades into the ether, not to mention that there aren’t any aspects that are likely to remain with the audience long after the film’s conclusion.

Jeremy Butler is a film school graduate of the International Academy of Design and Technology. He is been writing for Upcomingdiscs since 2012; however, movies have played a big part of his life for much longer. Favorite genres include horror, science fiction/fantasy, and comedy. Favorite movies are V for Vendetta, Boondocks Saints, Kiss Kiss Bang Bang, and The Godfather.
Merchants of Doubt (Blu-ray) Slow West