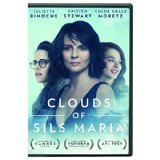 I remember seeing a trailer for this movie a few months back and feeling underwhelmed. It was one of those experiences where you see a trailer and feel like through that contact alone that you can determine the entire course of the movie. Fortunately, I have no trouble admitting when I am wrong, and that was the case for Clouds of Sils Maria. I didn’t have any clue what I was in for, and though slow pace of the film and the ever-changing landscape did get a bit tedious at times, the film possessed a story that I can only describe as life imitating art. Ironic, given that the film covers the story of a renowned actress being asked to return to a play that made her famous but this time in an older role, another once upon a time playing the younger one.

Juliette Binoche is the renowned actress Maria Enders; Kristen Stewart plays her assistant Val, and like a good assistant she runs every facet of Binoche’s life. The dynamic between these two women is the driving force behind the entire movie. Stewart’s character is the main reason that Enders decides to do the play, and most of what we learn about the play comes from these two rehearsing the lines. The relationship between these two is very close, and my assumption was that the dynamic was moving towards one forgone conclusion; however, as it turns out I was wrong as they sidestep the obvious pitfall, equally surprising and disappointing me. The chemistry between these two characters is obvious right off the bat; both actresses bring their A game without question as they laugh together and equally challenge one another.

Though the chemistry is excellent, a few moments of tension were not organic, such as when the two are at odds; the first time the two are at odds it kind of comes out of nowhere. Stewart’s character speaks up about something that she does not like, which is understandable, except I’m not sure if the time she speaks up was the most opportune time, because though I understand her point and sympathized, I was caught off guard, as was Binoche’s character from what I observed; then again perhaps that was the point. There are other moments when the two are at odds, but again these were the moments where the dynamic between the two seem to take a hit.

The story starts off a bit slow for my taste, and the audience is kind of thrown into the thick of things; it took me a second to gain my bearings, and the ever-changing landscape didn’t exactly help that. The different settings provide some beauty to the film; however, I would have enjoyed seeing the characters staying still a bit more. The switching from the train in the Alps, to a the hotel, to the party, and back to the hotel was dizzying at first and made it difficult to connect with the characters, because all of the interactions were on the go and it wasn’t possible to dig it. I get the reason behind the transitions: to show the kind of life Enders was leading. The little I know about celebrity lifestyles does support the transitions; celebrities are always on the go. Still, the dialog would have had a greater impact in my opinion had I had not needed to accommodate myself to different surroundings.

Speaking of dialog, that was the biggest draw for me. It was easily relatable, and it told a wider story. The play within the film helped illuminate the true story. In the intermissions between rehearsing lines, Binoche’s character’s true feelings about the character could be applied to her feelings about her life. Her inability to connect with the older character because she was still holding on to her past character was an obvious draw on her inability to let go of her youth. The best dialog was reserved for Stewart’s character, who provided clarity and was the heart of the film. There is one scene (and you will know it when you see it) where Val puts everything in perspective for Maria, and for me that speech was the culmination of everything the film was trying to say; that was the moment when I was really glad that I picked the movie.

I spoke of the chemistry between the actresses before, but now I want to address one specific performance which I deemed to be the best out of them all. Kristen Stewart’s performance was above and beyond what I was expecting; I now see why she won the Cesar Award for this. Stewart embraced the role and brought the needed aptitude and strength. I mentioned how great the dialog was, but in part the reason I loved the dialog had to do with Stewart’s delivery. Her character was the main focus for much of the picture, as she was the only character who saw herself clearly. There was one speech I where her character is attempting to illustrate the deeper underlying meaning behind a superhero movie that in anyone else’s hands may have come off as long-winded and reaching, but her conviction actually made me see her point of view. I’m not trying to knock anyone else’s performance, because there were some good ones, but hers took things to another level in my opinion. Also, not to give too much away, I am going to say that I didn’t like the conclusion as far as her character was concerned; a bit too ambiguous for my taste.

In conclusion, this film taught me the important lesson about not judging something too quickly, because had I followed my initial instinct I would have missed out on an experience that I really enjoyed. Though not your typical guy movie, it held my interest and provided some material that I was able to identify with and enjoy. A worthwhile experience for all in my opinion.

Jeremy Butler is a film school graduate of the International Academy of Design and Technology. He is been writing for Upcomingdiscs since 2012; however, movies have played a big part of his life for much longer. Favorite genres include horror, science fiction/fantasy, and comedy. Favorite movies are V for Vendetta, Boondocks Saints, Kiss Kiss Bang Bang, and The Godfather.
Borderline The Outing / The Godsend (Blu-ray)