The Outing / The Godsend (Blu-ray) 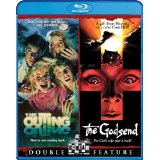 At the end of 2013 Shout Factory released a horror marathon on DVD called Scream Factory All Night Marathon. OK, so it only had four films averaging about 90 minutes each, hardly all night. But it was a nice collection of more obscure 1980’s horror that made a rather nice night in with the boys…or the girls. Two of those films have now found their way to a single Blu-ray disc and released by…you guessed it, Shout’s Scream Factory division. While I’m not a huge fan of having two or more films on one disc, this pretty much amounts to the same as the standard four episodes on a disc that you’ll find in many television releases in high definition. So, for the sake of a little nostalgia and the fact that these prints aren’t what you would call pristine or high budget, I’m going to get on board this ride.

For some reason this film has had its name changed from The Lamp to The Outing for American release. Still the title credit on the film itself still reads The Lamp. I suspect there is a rights issue somewhere that necessitates the cover art to be different from the film’s title card. Whatever you call this one, it’s a pretty good example of a low-budget answer to the 80’s slasher craze using the little seen Genie sub-genre as its framework.

I dream, you dream, we all dream of Jeannie. That is when she was played for laughs by Barbara Eden. Now we’re talking Genie as in the ancient Jinn, and it’s played by… well… mostly smoke and mirrors, green-eye animation, and finally a large stop-motion creature. Suddenly all of those dreams turn into nightmare. And that’s certainly true of The Outing/The Lamp.

A group of delinquent teens break into the house of an old Arab woman who is played by the film’s star Deborah Winters who also plays two other roles in the film. The kids make so much noise ransacking the place that they could wake the dead. Worse, they wake up the old lady who has a special lamp. In short work the teens. Unfortunately, it doesn’t go so well for the old Arab later either, and the next thing you know her estate is being sold off.

Her lamp ends up at the local museum, run by Dr. Wallace (Huston). It’ a bit of a mystery, so they’re working on the translations and dating the lamp. That’s how daughter Alex (Ivanyi) comes into contact with the thing and where she puts on a bracelet that connects her with the psychic energy inside the lamp. We’re pretty much talking possession here.

After a bit of a John Huges high school film complete with bullies and new boyfriend Ted (Bankston), the gang end up being persuaded to sneak in and spend a night at the museum. No, Teddy doesn’t come alive, and there’s no dino skeleton to play fetch with. A few cheesy sinister moments that involve a ceiling fan, some garter snakes, and eventually a large creature deliver the film’s requisite body count in pretty short order. Throw in a love affair between Alex’s dad and her teacher, also played by Winters, and you have all of the elements for a little teen romance and schlock-o-rama. It all pays off while the survivors attempt to use a clunky 1980’s computer to tell them what you already knew an hour earlier.

The lamp is a pretty cool prop. It’s got a claw at the end which holds a ruby. You get a few cheap thrills just having the claw rotate a little. There’s a nice scene where future dead folks are observed through the other side of the ruby. The monster isn’t quite as good a prop. It doesn’t help that the buildup is a lot of animated green effects that aren’t the least bit scary.

Deborah Winters was intended as the film’s star. She plays three roles and is still married to the film’s writer and second unit director Warren Chaney. She’s really pretty weak here and fortunately doesn’t have a ton of screen time when things get spooky. There’s a reason her career consisted of mostly television appearances.

On the other hand, there’s a bit of good acting coming out of Andra St. Ivanyi, who plays daughter Alex. She almost sells the cheap possession shots and carries the gaggle of teen actors with more than a little strength. But the film’s fans are likely interested in it strictly for the blood & boobs formula that became standard equipment on 80’s horror. Come to think of it. Nothing’s really changed, except now you sprinkle in a little torture.

In the end it’s a typical cautionary tale that warns “be careful what you wish for”. While it might not have been pulled off quite in an inspiring or clever way, give the film a few style points for the original back story. It’s a great film to run when you have your friends over for games or cards. Just don’t let anyone call Jinn.

The Godsend is pretty much a low-budget version of The Omen right down to the ending. But I won’t hold that against it. The Godsend does away with all of those pesky explanations about demons, devils, or curses and delivers a tight enough film to make this the better of the two to be found here. It’s based on a novel by Bernard Taylor.

Alan (Stoddard) and Kate (Hayman) Marlowe are a typical British family. They have four children including an infant.  One day while enjoying the picturesque countryside the family encounters a young pregnant woman (Pleasence). They invite her to walk home with them, where she stays just long enough to go into labor. A little girl is born, and suddenly the young stranger has vanished, leaving the Marlowes to raise young Bonnie as their own.

Letting the stranger into their home was the first mistake. Raising young Bonnie with their own children turns out to be a fatal one. Over the course of a couple of years three of the children end up dying in what always appears to be a tragic accident. Eventually Alan begins to suspect that Bonnie is behind the deaths. The suggestion drives a wedge between the couple, and Alan has to do what he can to protect his remaining child, his daughter Lucy (Deamer). Obviously, his rants and eventual action against the girl are not going to be believed, and in a telegraphed coda we know the pattern is about to repeat itself.

Children being murdered is a bit of a taboo even in the most vicious of horror sub-genera. You could have gotten away with it more in the 80’s, but there’s really nothing to be squeamish about here. Unlike the American films of the day, there is no blood or on-screen violence here. We never see exactly what befalls these unfortunate kids. There are hints that Bonnie has some telekinetic power, perhaps tied to a shawl that her mother left behind when she disappeared. But these elements are only hinted at and never confirmed or explained. A lot of the film is left to your own imagination. You could actually watch the film and walk away believing that perhaps Bonnie isn’t even guilty, but that would be pushing it. Credit a clever story to leave open so many possibilities. That works just fine.

In the final analysis we have two films here that clearly represent an era in both American and British 80’s horror. For the price, it’s a nice couple of films for a rainy night. Thunder would be good, too. Scream Factory is giving a new lease on life to obscure films in a way that’s not too expensive and more accessible being on Blu-ray. Sales will determine if there are more. Me, I’d like to see what else they might have in the wind.

These films are both presented in an aspect ratio of 1.78:1. The 1080p image is arrived at with an AVC MPEG-4 codec at an average 25 mbps. It’s not quite original for either film. Both films are listed as originally 1.85:1. There’s no real effort at restoration. The idea is to keep this cheap. The high-definition image presentations live up to what they were originally. There’s grain that should be present. The 80’s film stock provides the color palette, and there are artifacts on the prints. Mostly they are clean and don’t have enough issues to distract. If you’re going into this looking for video quality, you’re in the wrong video section anyway.

The DTS-HD Master Audio 2.0 is basically mono and suffers from distortion when you hear screams or music that leans toward the higher ends. You can hear the dialog, and I wouldn’t expect anything more.

If the collection of two films has a theme, I can only find it in one place beyond the decade both films were released. What I found fascinating was that we have an example of American horror of the day and one of English. I’m not saying either is a grand example, but there’s a contrast here to be found. At the time American horror filmmakers were going for the blood and body counts. British films continued with the psychological thrillers. They had creatures. Bonnie can certainly be characterized as a monster. But the focus isn’t on the violence itself which is never really seen. The focus is on the aftermath of the violence. Who knows if there was anything like that intended. I’d like to think there was some thought along those lines. Either way, the release is for those of you looking for a little ancient buried treasure on Blu-ray. If you do, there’s digging to be done in the 1980’s. Yeah, “you and Indiana Jones”.

Gino Sassani is a member of the Southeastern Film Critic's Association (SEFCA). He is a film and television critic based in Tampa, Florida. He's also the Senior Editor here at Upcomingdiscs. Gino started reviewing films in the early 1990's as a segment of his local television show Focus. He's an award-winning recording artist for Omega Records. Gino is currently working on his 8th album Merchants & Mercenaries. Gino took over Upcomingdiscs Dec 1, 2008. He works out of a home theater he calls The Reel World. Favorite films: The Godfather, The Godfather Part II, The Body Snatcher (Val Lewton film with Karloff and Lugosi, not the pod people film), Unforgiven, Gladiator, The Lion King, Jaws, Son Of Frankenstein, The Good, The Bad And The Ugly, and Monsters, Inc.
Clouds of Sils Maria Contest: Win Freedom On DVD From ARC Entertainment