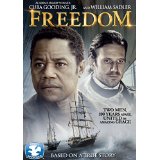 Our friends at ARC Entertainment have sent over three copies of their latest DVD release. It’s called Freedom and it has a stellar cast that inlcudes Cuba Gooding, Jr. and William Sadler. It’s the tale of two different men and their daring path to freedom. One braves the high seas while another is a slave fleeing a Virginia plantation, a slave hunter always hot on his trail. The stories are inspiring and three lucky winners will own the film.

Gino Sassani is a member of the Southeastern Film Critic's Association (SEFCA). He is a film and television critic based in Tampa, Florida. He's also the Senior Editor here at Upcomingdiscs. Gino started reviewing films in the early 1990's as a segment of his local television show Focus. He's an award-winning recording artist for Omega Records. Gino is currently working on his 8th album Merchants & Mercenaries. Gino took over Upcomingdiscs Dec 1, 2008. He works out of a home theater he calls The Reel World. Favorite films: The Godfather, The Godfather Part II, The Body Snatcher (Val Lewton film with Karloff and Lugosi, not the pod people film), Unforgiven, Gladiator, The Lion King, Jaws, Son Of Frankenstein, The Good, The Bad And The Ugly, and Monsters, Inc.
The Outing / The Godsend (Blu-ray) We’ve Changed Our Look A Bit