Amazing Space: An Audio/Visual Meditation on the Cosmos 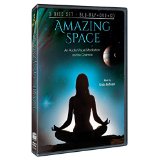 Amazing Space is a three-disc set (Blu-Ray, DVD and CD) that is essentially an ambient experience. There is actually a lot that I can say about the presentation, but it is not complicated on its surface. The cover picture shows a young woman in a silhouette sitting in a lotus position. That speaks volumes as well (as they say, a picture is worth a thousand words). The movie takes us on a musical journey from Earth to the farthest reaches of space and back again. The music can best be described as New Age and meditative. Again that is very important to the purpose of this presentation. The composer of the music, Kristin Hoffman, has a commentary extra which discusses chakras and meditation and the power of music. Maybe some of you don’t know what chakras are, but it is very important to a large part of the world population, most predominantly Buddhists and Hindus. The idea of the powers of meditation have been embraced by many various religious and pseudo-religious groups, and it is widely practiced for the benefits to health and well being. The makers of the movie also have a stated intention of promoting the elimination of unnecessary light pollution. Light pollution is the wasteful use of energy to flood the night sky with excessive light, preventing easy access to enjoying the natural light of the heavens.

The cinematography is wonderful, and the experience is meant to be restful, calming and renewing. It is not meant to be a narrative or informational experience. It fits into the wider movement of the New Age. I’m sure everyone is aware of the phrase “New Age”, but it is a vague term that has been co-opted by a wide range of groups. It has been explored in the West for a few hundred years and became extremely popular in the 1970’s. Yoga is a big part of the New Age movement. It suggests a spiritual connection to the Earth and the cosmos. It is not possible to do any kind of in-depth analysis of how this all relates and intertwines, but it might be important to any potential viewers of this disc.

The whole point is to sit back and let your mind drift and let the music and visuals wash over you. The visuals are sometimes suggestive of mystical visions. In other words, the views of the universe are not attempting to depict any scientific point of view. It is clearly just a tool to relax the mind and body and put you in touch with your inner connection to the endless universe (and whatever is inside you).

I will add a disclaimer about myself. I have a completely open mind. I take in all kinds of information and process it and store it in my brain cells. After doing that, I always live by the motto, “I don’t know”.

There are many sayings that state the wisdom of this. In Corinthians 8:2, it says, “If any man think that he knoweth any thing, he knoweth nothing yet as he ought to know.” I mention the Bible as just one example of this idea. It goes back to many quotes from the so-called ancient knowledge that suggests that modern scientific knowledge is far more limited than most scientists would admit. The idea of meditation and concentration on the chakras of the body is something that is becoming more popular with the public as a whole. We are in the Age of Aquarius, whatever that might mean for any of us in our daily lives. There are some who suggest that all kinds of changes are coming. If you are someone who scoffs at these kinds of ideas, you can play this as background visuals and music to a party and not give it any more thought than that. If you are more curious, Google the terms International Dark Sky Association, New Age, and Chakra. If you get this movie, it might inspire you to travel out into the middle of a desert just to stare at the night sky. It wouldn’t be the worst thing that could happen.