What We Do in the Shadows (Blu-ray) 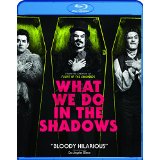 “When you get four vampires in a flat, obviously there’s going to be a lot of tension.”

The set-up for What We Do in the Shadows makes it sound less like your typical vampire movie and more like some kind of twisted season of The Real World. (Well…slightly more twisted than usual.) But besides finding a funny way to skewer bratty roommates and the mundaneness of everyday life, the movie works as a cheeky celebration of the classical cinematic bloodsucker.

We quickly meet the four undead roommates who have agreed to let a New Zealand documentary crew film them in advance of something called the Unholy Masquerade. Viago (Taika Waititi) initially serves as the affable, lovelorn tour guide; At a mere 183 years old, Deacon (Jonathan Brugh) is the “bad boy” of the group; Vladislav the Poker (Jemaine Clement) is the torture-loving vamp who has lost some of his mojo ever since tangling with a nemesis he calls the Beast; finally, there’s Petyr (Ben Fransham), who is over 8,000 years old, doesn’t say much, and most closely resembles Nosferatu.

The group dynamic — which largely consists of arguing over dirty dishes and reminding each other to place newspaper down while snacking on victims — is upended when a would-be meal named Nick (Cori Gonzalez-Macuer) is turned into a vampire. The inexperienced baby vamp clashes with Deacon and contributes to the group getting mixed up with werewolves, vampire hunters, hapless police officers, and a likable schlub named Stu (Stuart Rutherford). The entire group — along with zombies, witches, banshees, and the Beast — eventually converges at the Unholy Masquerade.

Now I realize that referring to a thoroughly silly “found-footage” comedy from New Zealand as a “traditional vampire movie” seems odd, but hear me out. In the past decade or so, the most prominent vampires in pop culture (The Twilight Saga, True Blood, The Vampire Diaries) seem more at home on the cover of a trashy romance novel than they would in a Universal or Hammer production. Even worse, we haven’t even been able to make fun of them properly. What We Do in the Shadows goes back to vampire basics by reveling in — and tweaking — some of the things that made them icons in the first place.

All of the classic vampire tropes — sleeping in coffins, having to be invited into dwellings, the vamps having no reflection, etc. — are given an amusingly banal twist. The film opens with a digital alarm clock rousting Viago from his coffin. And since the group has to be invited into places, they have a tough time getting into nightclubs. Meanwhile, their ridiculous outfits and questionable grooming choices are partially explained by the fact that they can’t use a mirror to see how they look. Even the totally tired “found footage” device is mostly a joke. (When Nick is being scolded for bringing attention to vamps’ house, he points out that his roommates invited a documentary crew inside.)

What We Do in the Shadows is based on a 2006 short film of the same name made by co-writers/co-directors Waititi and Clement. I’m not as familiar with Waititi’s work, but I’ve been a fan of Clement’s absurd, bone-dry comic sensibilities since Flight of the Conchords. He’s carved out a decent living in Hollywood comedies as a peculiar foil (Men in Black 3, Dinner for Schmucks, Rio), but What We Do in the Shadows really gives him and his cohorts a chance to let their freak fags fly. The result, obviously, can be hit or miss: the recurring gag about exceedingly normal Stu being such a great guy goes on a bit too long, and the Facebook/poking punchline would’ve felt old even a few years ago. Waititi and Clement more than make up for it with inventive sequences like the chase that leads to Nick’s transformation, and a gravity-defying hallway fight.

Clement’s signature wounded narcissism is a great fit for Vlad, but I was probably more amused by the relentless good cheer Waititi brought to Viago. The rest of the cast isn’t served quite as well. Gonzalez-Macuer gives Nick a funny, dense dudeness, but Brugh’s solid work is mostly in service of a confused character. (Deacon clashes with Nick from the beginning, but much of the “bad boy” characterization that was established early on is abandoned.) Deacon’s relationship with his long-suffering “familiar” Jackie (Jackie Van Beek) also gets the short shrift, which is a shame because Van Beek seemed game for more wackiness than she was given. On the other hand, I did enjoy Conchords co-star Rhys Darby as the fussy alpha of a werewolf pack.

Unlike Nick with his new flatmates, What We Do in the Shadows doesn’t overstay its welcome. (The film clocks in at just under 86 minutes.) The vampires here are fated to spend eternity alone together. So besides being deadly serious about its silliness, the movie sneaks in some sly commentary about the horror and hilarity of long-term companionship.

What We Do in the Shadows is presented in an aspect ratio of 1.78:1. The 1080p image is arrived at with an AVC MPEG-4 codec at an average of 34 mbps. This is a “found-footage” movie in name only. The filmmakers largely decided to eschew grainy, shake camcorder footage in favor of a clean, handsome HD image that elevates the shabby/gothic surroundings. In fact, the biggest influence I saw from the found-footage conceit was the way many scenes seemed center-lit, as if the source was coming from a videocamera pointing at an object. It leads to plenty of darkness creeping around the edges of the screen, and the deep black levels are up for the challenge. The only notably muddled sequence is the dimly-lit, noisy scrap between the vamps and the werewolves toward the end.

The DTS-HD Master Audio 5.1 track is dialogue-heavy, but impressively springs to life when the action on screen dictates it. There are the more obvious moments, like the sequence at a nightclub called Boogie Wonderland. (Which leads to the most notable use of subs.) But I was more amused by the way Plan 9’s intentionally kitschy score resonated throughout the surround speakers. Immersion is limited, but I appreciated the detail of making some of the dialogue believably muddled. (In theory, Viago, Deacon, and Vlad are wearing mic packs for their “documentary.”)

Commentary by Jemaine Clement and Taika Waititi: The filmmakers riff on everything from creating a fake logo/music for the non-existent “New Zealand Documentary Board” to pointing out that “Stu” is really just a lovely guy to be around in real life. There are actually a few awkward stretches mixed in with funny material in this track. This isn’t an essential listen given the treasure trove of bonus material that follows.

Behind the Shadows: (17:36) Instead of the usual canned, complimentary talking-head interviews, we get an on-the-set look at the practical effects behind some of the film’s standout sequences. This includes wire work for flying and a fire burn test for a character I won’t mention here. My favorite was seeing crew members manually rotate a hallway set for the film’s gravity-defying fight, which made it seem like a silly, bargain-basement Inception.

Deleted Scenes: (31:33) There are 12 total scenes, and the best material involves extended versions of the film’s mundane moments. (The vamps haggling to get into a nightclub, Viago taking part in an online auction; Vlad taking care of the phone bill.) Features a Play All option.

Interviews (18:35) In-character/talking head segments from Deacon, Viago, Vladislav, the Police, the Werewolves, and The Zombie (whose name is Ian, by the way). Features a Play All option.

Poster Gallery: (0:50) I don’t normally have much to say about Photo/Poster Galleries as extras, but there are some really cool designs among the 50(!) posters featured here. (Plus, the artists get their due at the end.)

What We Do in the Shadows has more in common with the mockumentary stylings of Best in Show than the found footage horror of Paranormal Activity.

I recommend you check this one out if you don’t mind an offbeat sensibility; in the process of making viewers laugh, the film also breathes some new life into undead.