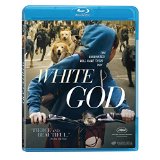 Howdy, Partners. Johnny’s working down at the bunkhouse today, so here I am to let you know what might be causing a stampede down at your local video store. It’s a slow week here on the ranch, but that doesn’t mean we won’t be bringing you a few things to look at. We already have the early review up for Magnolia’s White God out on Blu-ray. I’ll be telling you more about Sony’s release of the final season of Sy-Fy’s Helix. Shout offers up some more “Shlock-O-Rama” with the release of Ghost Town. I’ll be sharing my thoughts on that one later, as well.

There are a few other titles of note this week. MPI circles back with Comet. Monarch declares She Loves Me Not. Section 23 delivers a 5-disc high-definition Anime collection on Blu-ray with No Game No Life. We’re looking forward to hearing what you’re planning to pick up this week.

Gino Sassani is a member of the Southeastern Film Critic's Association (SEFCA). He is a film and television critic based in Tampa, Florida. He's also the Senior Editor here at Upcomingdiscs. Gino started reviewing films in the early 1990's as a segment of his local television show Focus. He's an award-winning recording artist for Omega Records. Gino is currently working on his 8th album Merchants & Mercenaries. Gino took over Upcomingdiscs Dec 1, 2008. He works out of a home theater he calls The Reel World. Favorite films: The Godfather, The Godfather Part II, The Body Snatcher (Val Lewton film with Karloff and Lugosi, not the pod people film), Unforgiven, Gladiator, The Lion King, Jaws, Son Of Frankenstein, The Good, The Bad And The Ugly, and Monsters, Inc.
White God (Blu-ray) Joan Rivers Box Set