End of The Tour

Posted in: The Reel World by Archive Authors on August 1st, 2015 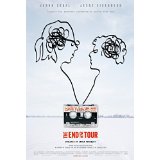 I don’t think there has ever really been a great film about a great writer. We naturally compare their lives to works of great fiction. Great fiction tends to distill the tedium and awkwardness out of real life. Real life can be exhausting in the day-to-day disappointments that can sometimes be wrapped in small victories. David Foster Wallace was a great writer. This is almost universally acknowledged. David Foster Wallace no longer is because he hung himself in 2008 at age 46. Many people who were in his life are now very protective of him and his privacy. They are angry at the idea of a movie being made about his life. Authors like J.D. Salinger and Thomas Pynchon have spent their lifetimes being reclusive, but the fact that they had published and provoked our thought means we are entitled to explore their lives. The problem always will be rising to the occasion and doing justice to the thoughts they provoked.

The End of the Tour is about five days a reporter for Rolling Stone spent with Wallace. The journalist was David Lipsky, who had written a novel of his own and was clearly in the grips of some hero worship. The hero he met was self-conscious to a nearly painful degree. He also seems to be struggling to be an average guy. I don’t think the movie is a good indication of what Wallace was really like. But then, let’s just look at this as a movie first. As I said, I don’t think the author should be protected and hidden from us because he had faults and deficiencies. I think we should keep an open mind as to what the truth really is. I have listened to interviews done with Wallace, and he always comes off as reflective, thoughtful, truthful, intelligent, profound, and open-minded. I think the intention of this movie was to reveal a more unvarnished view of the writer.

Jason Segel (How I Met Your Mother, Forgetting Sarah Marshall, Sex Tape) is David Foster Wallace. Jesse Eisenberg ( The Social Network, Zombieland, Now You See Me, Batman Vs Superman) is David Lipsky. This is basically a two-man talkfest, although there are other characters played by Joan Cusack, Mamie Gummer, Ron Livingston, and Anna Clumsky, who show up briefly. The movie is a forced and awkward encounter that is full of attempts to acknowledge how awkward and forced it is. Both writers are trying to get along and be friends in the midst of what they know is an artificial construct. Wallace, in this situation, is trying to go to great pains to show himself as being as common and ordinary as everyone else. He is always aware about how he is coming off while also trying to be as honest as is humanly possible. There are times, though, when he seems to not be able to control the presentation of himself and almost too much real honesty comes through. Does this make him seem like a jerk, or do we like him anyway? I think we like him anyway.

I don’t think this movie is a very good representation of who David Foster Wallace was, but I think it’s a good place to start. The simple fact is that his suicide has added a kind of gruesome glamor to Wallace’s life, as if he were James Dean. The movie begins with Wallace’s suicide, so it definitely courts that kind of discussion. One has to decide if it is ghoulish to hash over the life of a dead man with major depression issues. I personally think that it’s OK. If you allow this movie to be an introduction to a further investigation of the work of David Foster Wallace, that is a good thing. As a movie, in and of itself, it is a clear attempt to do something outside the clone-like Hollywood product. The direction is documentary-like to the degree of using extremely grainy film stock and natural lighting. I think Segel is definitely doing the best work of his career, while Eisenberg seems to bash against the natural limitations of his acting style. This movie may have a shot at some Oscar nods, but ultimately, it is probably a failure because it is reaching for greatness and does not succeed.