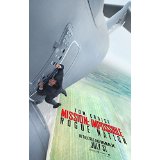 “This may very well be our last mission, Ethan…make it count.”

You wouldn’t know it from looking at him, but Tom Cruise is now 53 years old. So it’s only natural to wonder how many more Missions the indomitable superstar has left in him. Well if Rogue Nation is any indication, the above quote is meant to be more winking than prophetic. Just like its tireless star, the fifth installment of the 19-year-old Mission: Impossible film franchise is sprier, tighter, and more energetic than its age might suggest.

If you want to get technical, the Mission: Impossible brand dates all the way back to the TV series of the same name, which aired between 1966 and 1973. Rather than slavishly adhering to its source material, the movies focus on the show’s endless adaptable premise: a team of secret agents known as the Impossible Mission Force (IMF) embark on a series of globe-trotting, high-risk missions. (The first Mission: Impossible film thought so little about the TV show’s continuity that ***19-year-old SPOILER ALERT*** it turned Jim Phelps  — played by Peter Graves in the series and Jon Voight in the movie — into a villain.) In fact, the most valuable holdover from the original show is probably Lalo Schifrin’s iconic theme music.

The movies have largely been standalone entities, with Cruise being the one major constant. (The first Mission: Impossible was also the first film that earned Cruise a producer credit.) Rogue Nation somewhat bucks that trend as the film deals with the fallout from franchise predecessor Ghost Protocol. After a Bond-style cold open set in Minsk and featuring the already-famous plane stunt, we learn Ethan Hunt (Cruise) has been obsessively hunting a shadowy organization known as the Syndicate, which seems to be comprised of deadly operatives that rival IMF’s own agents. Ethan’s resolve is strengthened when he comes to face to face with Solomon Lane (Sean Harris), the apparent leader of the Syndicate.

At the same time, CIA director Alan Hunley (Alec Baldwin) is calling into question the usefulness and relevance of the IMF. In a sly meta nod to the franchise’s own preposterousness, Hunley wonders if IMF’s successful-yet-destructive exploits are simply the result of luck. He also posits that Hunt has fabricated the existence of the Syndicate to justify the continued existence of the IMF. As a result, Hunley calls for a worldwide manhunt targeting Hunt as Ethan’s former IMF cohorts (Simon Pegg, Jeremy Renner) quietly root for Hunley to fail. Hunt eventually enlists the help of his former allies — and works with duplicitous British agent Ilsa Faust (Rebecca Ferguson) — to dodge his own government and bring down the Syndicate.

Initially, the Mission: Impossible franchise served as a moldable director’s showcase that allowed for eclectic, uber-stylish filmmakers like Brian De Palma, John Woo, and J.J. Abrams to apply their unique aesthetic to each movie. Although Brad Bird — making his live-action feature film debut — brought a refreshing sense of play to the action in Ghost Protocol, the more lasting impact seems to have been made by Abrams, who joined Cruise as a producer on the subsequent films. The result has been an old-is-new-again return to practical stunts and vintage action movie making. (Abrams is similarly winning back fanboy hearts and minds by embracing practical effects with his upcoming Star Wars movie.)

The person occupying the rotating director’s chair this time around is Christopher McQuarrie, a frequent Cruise collaborator (he directed Jack Reacher) who is best known for his screenwriting (he won an Oscar for penning The Usual Suspects and has writing credits on past Cruise films like Valkyrie and Edge of Tomorrow.) On the surface, McQuarrie is not exactly a sexy choice when you compare him to the filmmakers who came before him; at worst, you might surmise Cruise simply hired one of his cronies.

“You want drama? Go to the opera.”

I’m pleased to report McQuarrie — who also shares screenwriting and story credit here with Drew Pearce — has crafted a taut, nimble spy thriller. In addition to the opening plane stunt, the film has a handful of remarkable action sequences, including an extended, rhythmic assassination attempt inside a Vienna opera house. The most pulse-pounded stretch, however, is probably a motorcycle chase — a Tom Cruise specialty — that takes Ethan and Co. through the streets (and winding mountain roads) of Morocco. All of these action scenes are great fun in the moment, but they ultimately prove to be somewhat exhausting — it feels like there’s one set piece too many here — and makes the promising story feel mostly forgettable.

“One of these days you’re gonna go too far.”

It’s no surprise the action scenes suffer from a case of “too much-ness” given the personality of the star involved. I haven’t even mentioned the astounding underwater sequence that required Cruise to hold his breath for six minutes. Actually, I’m pretty sure that scene didn’t really “require” Cruise to hold his breath for that inhuman amount of time, and that he did it on his own volition. By now, it’s an open secret that Tom Cruise is kind of a maniac. (It wasn’t until I started thinking about the plane stunt that I realized how much of these films are about Tom Cruise Hanging Off Things.) The actor’s real-life, Scientology-fueled antics have been a major turn-off for a portion of the moviegoing audience, but that same wild fervor is also what has powered many of his greatest moments on screen. (Say what you will about the guy: Tom Cruise will never, EVER phone in a performance.) I actually wish the movie had played some more with the idea that a mentally unstable Ethan fabricated the Syndicate; it gibes with what a lot of people already think of “Crazy” Cruise.

The rest of the actors, just like the characters in the film, are mostly there to support Cruise. There’s really no good reason for Paula Patton’s character from Ghost Protocol to be missing from this film, but Ferguson (The White Queen) winds up being the series’ best femme fatale. Her Ilsa is equal parts tough and alluring, and even gets just enough back story to suggest she might actually be the female Hunt. Pegg, always a reliable source of comic relief, gets to suit up (a tux even!) and mix it up in the field as a bona fide spy. Baldwin is an amusing blowhard of a foil, but is ultimately underused. Same goes for the wheezy Harris, although save for Phillip Seymour Hoffman’s performance in Mission: Impossible III the series has never been a showcase for villains. Renner — who was once being groomed to take over the franchise — is largely relegated to smirking on the sidelines, which confirms my feeling that they’ll have to pry this franchise away from Tom Cruise’s cold, dead hands. Ving Rhames turns up once again as Luther Stickell, seemingly for no other reason than to continue his streak of appearing in each Mission: Impossible film. (I’m good with that, actually.)

So could this really be the final Mission for Cruise and Co.? (Not if the star has his way.) Based on the thrilling, thoroughly entertaining Rogue Nation, I’m betting we’ll once again be watching Ethan Hunt risk life and limb (and hang off something precarious) before long. Ultimately, the decision will be made by you and your wallets, “should you choose to accept it.”