William S. Burroughs In The Dreamachine

Posted in: No Huddle by Archive Authors on August 2nd, 2015 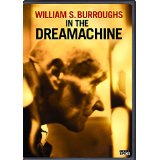 The DVD release of In The Dream Machine makes a number of promises. It promises to show rare footage of William S. Burroughs, Allen Ginsberg and Leonardo DiCaprio. It does, but only in the broadest interpretation of that concept. It has a blurb from famed avant-garde filmmaker Kenneth Anger which says, “More interesting than most documentaries in that it is presented in the way Burroughs writes”. I flat out disagree with that. It does show Burroughs extensively, but mostly in incoherent or unflattering segments. The film is incompetently edited and put together with a slapdash of offbeat and unintelligible segments. This sort of thing was fairly common back in the hazy, lazy days of the 1960’s, but this has been compiled from 1996 through 2014.

Woodard makes numerous appearances in the DVD by himself and with Burroughs. At one point he makes a brief attempt to show how to make the dream machine. If you want to know how to build the dream machine, I suggest googling how to build a dream machine, and you should find detailed instructions under ultraculture.org. You’ll need a 32” x 32” piece of aluminum or heavy cardboard. You cut out the prescribed patterns with an X-acto knife. You will need to glue it together so it will fit over a 78 RPM turntable with a light bulb suspended inside. Turn it on, close your eyes, and dream away. It is supposed to induce a hypnagogic (altered state of consciousness) state. There is an interminable DVD extra at the Freud Museum of Dreams in Saint Petersburg, Russia with Dr. David Woodard.

I will take a moment to interrupt myself and say that I am very sympathetic to this material despite itself. I think Burroughs is an extremely influential writer, but he is not someone who is easy to recommend to the uninitiated. He is really the old man of weirdness. There is an audience for that sort of thing, and I am in no way being judgmental of his colorful lifestyle. It did include the accidental killing of his wife, which was a bad thing, but that is a story for another day.

In The Dream Machine is an artifact and nothing more. It is not a competent documentary. It is simply the release of odd bits of footage, some of which include rare conversations with Burroughs. The rarest footage is also the saddest, because it shows Burroughs in his extremely modest house in Kansas having conversations with Woodard that are candid but mostly banal. There are tons of hours of footage of Burroughs on the Internet that are far more instructive and illuminating. The conversation in the DVD was done in 1996 when Burroughs was 82 and months from death.

The biggest problem with the DVD is Woodard. He has inserted himself frequently into the proceedings with bizarre asides and rants. He is clearly a disciple of Burroughs’ proselytizing on the benefits of mind-expanding drugs. Both Burroughs and Woodard demonstrate some of the drawbacks to that kind of thinking. The most generous characterization I can make is that it makes you kind of wacky (not that that’s a bad thing, although it might be a bad thing if it’s because you lost too many brain cells).

The good thing about the dream machine described in the DVD is that it doesn’t require drugs to get you to an altered state. That should definitely help some people to avoid damaging themselves. There are many people who practice meditation without drugs, and this may help those kinds of people.

I would like to build one of these dream machines, but since I don’t take drugs, I may not be qualified to accomplish it. It does seem like it would be a great addition to any household (especially if you’re a fan of the weird). I give this DVD an A for effort and an F for execution.

End of The Tour Witches of East End: Season 2