Posted in: No Huddle by Archive Authors on August 2nd, 2015 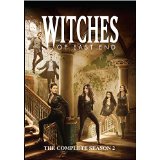 Loosely based on Melissa de la Cruz’s book, Witches of East End was renewed for a second season in July 2014, opening with over 1 million viewers scrambling to the TV set to see what would happen now that the portal of Asgard was opened and Joanna was struggling to overcome Argentium poisoning. Featuring Julia Ormond as the matriarch Joanna Beauchamp, she is parked in the middle of lofty tales of the supernatural ,which are commonplace to this unusual family. If you’ve been following the trials and tribulations of the Beauchamp brood, you already know these aren’t the wart-nosed witches of your childhood storybooks. When you watch this, understand you are not watching for superiorly crafted writing; it is fluff, pure and simple – a soap opera with supernaturally gifted women and men. It features  modern-day witches who’ve lived multiple lives that always cross, of course just happen to be sexy as h*ll AND have very cool names based on Norse mythology.  An example of this is Freya, played by actress Jenna Dewan Tatum (yes, married to Channing “XXL”), who even pregnant while filming looked like Photoshopped perfection in this production. Much like what Vampire Diaries was for vampires, we now have the ideal setup for a WB Lifetime program – a supernatural show about lots of picture-perfect beautiful people doing magic.

Episode one “A Moveable Beast” bursts open with Freya’s long lost twin brother arriving in the nick of time to save his mother, Joanna. Poor Dash is still fretting over his brother. When he used magic against his brother over Killian’s love for his fiancée ex-fiancée, Freya, sent him soaring skyward, crash landing in a boat and adrift in the sea – did he kill him, or didn’t he? Apparently not, as Killian is shacked up with a brand-spanking-new bewitchingly lovely wife, Ava. No, of course, she’s not dosing him with mind-control drugs to make him forget his soulmate and one true love, Freya, hoping to get him to knock her up so she can get what’s coming to her per her agreement with a warlock many decades before.

Eventually, Dash gets blackmailed about attempted murder and involves Ingrid to cover the crime of murdering the blackmailer. Speaking of the other sister, a nocturnal sleepwalking Ingrid – she is getting busy with a killer Mandragora beast who later in episode three “The Brothers Grimore” might just be Frederick. The family can’t kill the Mandragora because Ingrid is its mate. You kill one, you kill the other. Thankfully they figured out how to do one without the other.

There are more twists and turns in this season than the newest roller coaster at Busch Gardens. And there is a LOT of blood, death, near-death, half-death, and rise-from-death in Season Two. Pretty much everyone dies, but not everyone dies for good.  Of course, there’s romance to counter the body count – that isn’t the bestiality kind. Ingrid eventually appears that she will hook up with Freya’s ex, Dash, despite Freya’s disapproval, because the guilty parties have been spending so much time together, but that is “dashed” to pieces when the truth is revealed in “Sex, Lies, and Birthday Cake.” Killian and Freya time travel through their love story. Much like Romeo and Juliet, these star-crossed lovers are destined to end in tragedy.

The brothers discover that they are warlocks and also long-long residents of Asgard. When Ingrid convinces Dash to admit to Killian what he did, there is hell to pay. The house and brothers are in shambles, but a long-lost diary is found containing potent dark magic that Ingrid warns never to read. Unfortunately, the spell was also broken. A body planted underwater, protecting Dash from being charged with murder, just popped up on a sandy bank.

And time travel. Did I mention time travel? To escape the King, their father/grandfather, three of the Beauchamps travel through a time portal to hide them in 1840 from the evil grandfather and seek a magical box to destroy him (the King). This leaves poor Ingrid and brother Frederick to deal with grandfather – now wearing an entirely different body – the human body of Wendy’s one true love, a man named Tommy – who still stuck around after inadvertently witnessing Wendy’s transformation from a cat to a naked woman in the kitchen. Yep, the man definitely dropped the flowers.

Did I confuse you yet? Oh, grandfather, who the family has been hiding from behind a magical cloak of existence for hundreds of years, only enters the story roughly over three quarters into it. He’s a real piece of…. work. He manipulates and hurts people. But eventually he does get what’s coming to him only when all the witches unite in a powerful spell that Frederick read in Dash’s mind. Why? Because Dash read the diaries he wasn’t supposed to.

After America’s obsession with vampires, Lifetime decided this would be the perfect time to try to cast a spell on America with witches. Unfortunately, late into second season, interest waned and low ratings caused Season Two to be the last season. Unless Netflix comes to its rescue, we may never know who Ingrid’s baby daddy is or the owner of the voice that greeted Aunt Wendy when she gave up her life for Tommy’s and somehow found herself in hell.

It’s fun for what it is – pure escapism, but if you binge-watch like I did, be prepared for a migraine.

William S. Burroughs In The Dreamachine The Casual Vacancy (Blu-ray)