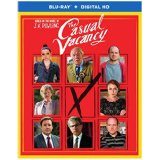 How do you follow up the biggest publishing phenomenon of the last 20 years? Well, if you’re J.K. Rowling, you excise all talk of horcruxes and Hogwarts and supplant it with warring parish council members and the idyllic village of Pagford. That’s the setting for The Casual Vacancy, Rowling’s 2012 follow-up to the Harry Potter series. The book has been adapted by BBC and HBO into a three-part miniseries. With its small-town setting and 23(!) main characters, the series simultaneously feels quaint and sprawling. It also made me wish I was able to spend more than three hours with these people.

“Everyone’s got skeletons rattling in their cupboard.”

The opening of each episode features a character taking a bike ride or a jog around town, which is a convenient and picturesque way of situating us with what’s going on in Pagford. Howard Mollison (Michael Gambon) owns an upscale delicatessen in town. With his wife Shirley (Julia McKenzie) at his side, Howard is also the leader of Pagford’s Parish Council. The Mollisons’ pet project is to replace the village’s Sweetlove House community center — which attracts visitors from the lower-income, drug-addled neighborhood known as the Fields — into a posh health spa. The main opposition comes from do-gooder lawyer Barry Fairbrother (Rory Kinnear), who wants to keep the community center open because it helps people like his troubled childhood friend Terri (Keeley Forsyth) and serves as a safe haven from domestic abuse for his nephew Andrew (Joe Hurst).

Tragedy strikes unexpectedly when a key council member dies. The death creates the titular Vacancy on the council, and the citizens of Pagford barely wait until the body is cold to prop up their own candidate. On Team Sweetlove, there’s fidgety, indecisive educator Colin Wall (Simon McBurney), who is pushed into running by stronger personalities, including his sweet, sturdy wife Tess (Monica Dolan) and the intensely philanthropic Dr. Parminder Jawanda (Lolita Chakrabarti). On Team Health Spa is spineless lawyer Miles Mollison (Rufus Jones), Barry’s law partner and son of Howard and Shirley. Miles basically does whatever his mom tells him to do, much to the chagrin of his wife Samantha (Keeley Hawes), who also hates much of her life in Pagford. As the vote between Colin and Miles approaches, it seems like Rowling couldn’t help but incorporate a touch of whimsy. Each of the candidates is gleefully (cyber)terrorized by the ghost of the dead council member, who posts damaging personal details in an online forum. There are also some ghoulish premonitions for a couple of key characters.

It’s no major spoiler to say there’s nothing mystical going on in Pagford. (The identity of the “ghost” is revealed early on in part 2.) Rather than focusing on a central mystery — the closest we get is the question of who will win the seat on the council — The Casual Vacancy is much more interested in exploring the interconnected lives of this particular group of miserable Muggles. The fictional town of Pagford — with its social pecking order, petty rivalries, and shared history among its citizens — can easily stand-in for any close-knit community.

The Casual Vacancy has been adapted by director Jonny Campbell and writer Sarah Phelps, and the most compelling theme they’ve seized upon is the idea of responsibility. Howard and Shirley strongly believe people are to blame for their own problems, whether it’s the poor citizens of the Fields or Samantha with her mental health issues. At the other end of the spectrum are people like Barry, who feel compelled to lend a hand whenever they can. It’s tempting to sanctify someone like Barry, but the miniseries shows the toll aggressive do-gooding can take. (Barry’s wife feels neglected; Dr. Jawanda’s forceful righteousness gets her in hot water.) The theme of responsibility is applied in a considerably more contrived way when a careless, tossed-off action in the middle of the story ends up having deadly consequences in the end.

The cast here is uniformly excellent. Gambon is probably the most recognizable name (and the only holdover from the world of Harry Potter). He makes for an imposing and daft village patriarch, even though I suspect Mollison was probably a more outwardly repulsive character on the page. Kinnear succeeds in making saintliness look ordinary, and Hawes does a great job alternating between Sam’s inner turmoil and some of the story’s more outlandish beats. My two favorite performances, however, belong to McKenzie and newcomer Abigail Lawrie. McKenzie is positively chipper and casual with her cruelty; she’s like a displaced Downton Abbey character. Lawrie is a fierce, formidable revelation as Krystal, the daughter of drug-addicted Terri. On the surface, Krystal is your garden-variety snarly teenager, but Lawrie shows us that toughness is essential in her role as caretaker for her mother and younger brother.

There are literally a dozen other performances I can talk about. Campbell and Phelps do a solid job of interweaving the myriad storylines within the miniseries’ three-hour running time. But the performers here are so good, I wouldn’t have minded seeing even more. Maybe an episode that focused largely on the school Andrew, Krystal and others attend. (Brian Vernel is a know-it-all live wire as Stuart, aka“Fats”, Andrew’s best friend and a love interest for Krystal.) The seams do show occasionally: the payoff of lavishing so much attention on Dr. Jawanda’s nearly-mute daughter isn’t totally satisfying.

I didn’t read “The Casual Vacancy,” but I did read all seven Harry Potter novels. As a result, I’m very familiar with the griping and nitpicking that went on over every change when those blockbuster books were adapted for the screen. As far as I can tell, the people who bemoaned the absence of Peeves the Poltergeist from the movies would have an absolutely fit over The Casual Vacancy. Obviously, I’m blissfully ignorant about omissions and changes from the novel, so I’m not going to get fired up in the same way a fan of the book might.

I also honestly don’t think it matters. Then again, my favorite Harry Potter movie was the one that arguably took the most liberties with the source material, so maybe I’m the wrong guy to ask. All I know is that The Casual Vacancy stands on its own as a well-acted, thought-provoking and affecting drama.

The Casual Vacancy is presented in an aspect ratio of 2.40:1. The 1080p image is arrived at with an AVC MPEG-4 codec at an average of 15 mbps. The three-hour plus feature presentation and all the bonus material (which I’ll get to in a bit) are all presented on a single disc. If there’s any evidence of compression artifacts it’s that the sweeping shots of the Pagford countryside aren’t quite as crystal clear and vibrant as they could have been. That being said, I was pleased to see the wider aspect ratio — a rarity in made-for-TV productions — which gave those same sweeping shots a boost. There is fine detail on display in the cobbled buildings in town. Colors, particularly green, are earthy and the scenes at Sweetlove and in the Fields have an appropriate drabness.

The DTS-HD Master Audio 5.1 track is largely here to serve the dialogue, although it does sneak in some effective bits of immersion. (Church bells in the distance are audible in the rears during an early conversation between Barry and Terri.) Subs are barely heard from; I felt a rumble during the opening credits of part 1 to punctuate a flock of sheep grazing in a field and during the few scary beats involving deadly visions. Fidelity is also strong on this solid, serviceable track.

An Introduction to The Casual Vacancy: (8:33) Offers some background on fictional Pagford and highlights the story’s themes. (Humanity and compassion for others.) Cast and crew also discuss the timelessness and tragedy/humor of the proceedings.

Adapting The Casual Vacancy: (9:49) The best featurette of the bunch doesn’t give a point-by-point breakdown of the differences between the book and the miniseries. Instead, Phelps and the filmmakers discuss some of the reasoning behind a few key changes, like considerably beefing up the dead council member.

Casting The Casual Vacancy: (13:31) The sort of lovefest you’d expect from the actors, although there are some amusing bits to be found. Campbell talks about Lawrie nailing her audition as Krystal, which is her first screen credit. And since the scenes between Shirley and Samantha are so brutal to watch (in a good way), I also felt irrationally happy about the fact that McKenzie and Hawes get along great in real life. (Hawes jokes that she wants to adopt McKenzie.)

There’s no clear correlation between the fan base that voraciously devoured the “Harry Potter” books and the intended audience for The Casual Vacancy. I don’t mean to suggest this is a bad thing: I think it’s probably a good idea to leave any Potter baggage on Platform 9 ¾ before diving into this story.

The Casual Vacancy is a thoroughly entertaining, if somewhat incomplete, drama that absolutely deserves to be watched on its own merits.