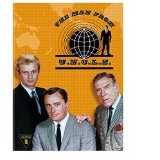 “In New York City on a street in the East Forties there is an ordinary tailor shop. Or is it ordinary? We enter through the agents’ entrance, and we are now in U.N.C.L.E. headquarters. U.N.C.L.E. is an international organization consisting of agents of all nationalities. It’s involved in maintaining political and legal order anywhere in the world.”

Say Uncle. That’s U.N.C.L.E., otherwise known as the United Network Command for Law and Enforcement. Starting in 1964, The Man From U.N.C.L.E. was one of a flurry of shows to take advantage of the new James Bond craze. It featured many of the same elements as the super-spy films. You had sophisticated spies in tuxedos. There were plenty of gadgets. And there were constant threats of world domination, mostly from the evil counter organization, THRUSH. The two top spies for the good guys were Napoleon Solo (Vaughn) and Illya Kuryakin (McCallum). The Bond references were never subtle and always intentional. Ian Fleming himself consulted on the show and named Napoleon Solo after a Bond character. Together Solo and Kuryakin would travel around the globe, saving the world from almost certain doom. The series ran for four years. In 1983 there was talk of bringing the show back. Apparently the two stars were still up to the task, and both could have used the work. Thus was born the television film and potential pilot: The Return Of The Man From U.N.C.L.E.: The Fifteen Year Affair. The pilot didn’t take off, and the project appeared dead until it was revived once again as a feature film reboot of the franchise ala Mission: Impossible. There was also a short-lived spinoff called The Girl From U.N.C.L.E. that starred Stephanie Powers as the first female field agent for the organization.

When the show began, it was more of a one-man mission as Solo lived up to his name. The first few episodes saw little of Kuryakin, who was more of a base analyst. The show was also failing miserably in the ratings. It was going up against two powerhouse shows in McHale’s Navy and The Red Skelton Hour. The network was ready to pull an early plug on the spy show. Instead, there were two fateful changes made. The show was moved to a new timeslot, eventually landing in the Friday timeslot where it flourished. The other change brought David McCallum’s character into more of a partnership with Solo. Solo would remain the lead, but the team created a nice chemistry that would carry the series for the rest of its run and beyond.

The format remained virtually unchanged for the show’s life. The episode titles all ended in the word “affair”, as did the mission files on the show itself. Some threat, usually from THRUSH, would become known, and the two spies would be sent around the globe to deal with it. As much as the Bond films were on everyone’s mind, Man From U.N.C.L.E. didn’t rely quite so much on the gadgets, obviously dealing with a television budget. The most notable was the cigarette pack that doubled as a communicator radio. The headquarters featured metal walls that slid open and closed like something on the bridge of the starship Enterprise. The offices were loaded with computers that took up a great amount of space. It really wouldn’t appear very high-tech at all today. Even the communicator is a bulky design compared to today’s cell phones. Obviously, the Cold War stories and the dated styles and tech will stand out when viewed today. But I was surprised at how easy it was to get into the stories and characters so that I could treat it more as a period piece than a dated one. That’s the mark of a truly great television show.

Even if the gadgets weren’t out of control, many episodes did feature a science fiction aspect that would become more pronounced in future seasons. In season 1 there is an episode of a group trying to revive Hitler, who has been kept in suspended animation. There’s also an episode that alludes to alien contact in the past and the need to build a super-weapon in preparation for a war with alien invaders. But the show was just as likely to take a lighter touch. One episode deals with a pre-Get Smart Agent 99 Barbara Feldon as an U.N.C.L.E. translator who dreams of being a field agent. So she constantly pushes Solo with mock attempts on his life. To get her off his back, he sends her on a top secret “mission” to fill Waverly’s tobacco humidor. Of course, she ends up involved in an actual mission chased by THRUSH agents. But the show was at its best with “saving the world” missions. To keep you guessing, the end credits always finished with a thanks to the United Network Command for Law and Enforcement for their cooperation in making the show.

The show attracted some serious talent both in guest stars and crew. Many of the first season episodes were directed by Richard Donner, who also appears as a drunk party guest in one of the episodes. Still, it was the who’s who of television guest stars that marks this show for what it was. It attracted the most notable talents and stands as a wonderful look at the top stars of the era. In season one alone we find William Shatner and Leonard Nimoy together in an episode years before Star Trek was born. Back to back episodes featured Hogan’s Heroes stars Werner Klemperer (Klink) and John Banner (Schultz). Other guest stars included Fritz Weaver, Roger C. (Harry Mudd) Carmel, Richard (Oscar Goldman) Anderson, Robert Culp, James (Scotty) Doohan, Brooke Bundy,Anne (Forbidden Planet) Francis, Jill Ireland,  Harold Gould, a very young Kurt Russell, Ricardo (Khaaaaaaaan)  Montalban, June (Lost In Space) Lockhart, Madge (Aunt Harriet) Blake, Susan Oliver, Pat (One Day At A Time) Harrington, Jr., Elsa (Bride Of Frankenstein) Lanchester, Yvonne (Bat Girl) Craig, Richard (Jaws) Kiel, Cesar (The Joker) Romero, Eddie Albert, Jeanette Nolan, Bonnie (One Day At A Time) Franklin, Charlie Manson victim Sharon Tate, Martin Balsam, Rip (Men In Black) Torn, and the ageless James Hong.

Both Robert Vaughn and David McCallum had great careers in the years since The Man From U.N.C.L.E. Vaughn would play a similar role in The Protectors. This time he was a freelance crime fighter. He would play a killer twice on Columbo and had several recurring roles in other shows. McCallum would end up in the short-lived The Invisible Man series in the 1970’s. He was Steel in Sapphire & Steel. But most fans now know him for his role of Dr. Mallard, “Duckie” in NCIS. Thirteen years, and that show is still going strong.

It’s not accident that the series is being released now. There’s a new film coming very soon, and Warner Brothers understands the marketing potential here, to be sure. You get all 29 episodes. There are no extras on this set, but there are only three episodes per disc. That was a wise choice that provides exceptional image quality for such an old series. Fans will be happy at the print conditions, to be sure. If you can’t find it at your local video store, you should keep looking. Many video outlets have cut back on their television offerings. It may be a little harder to find. “U.N.C.L.E. strongly believes you should find a way.”

Gino Sassani is a member of the Southeastern Film Critic's Association (SEFCA). He is a film and television critic based in Tampa, Florida. He's also the Senior Editor here at Upcomingdiscs. Gino started reviewing films in the early 1990's as a segment of his local television show Focus. He's an award-winning recording artist for Omega Records. Gino is currently working on his 8th album Merchants & Mercenaries. Gino took over Upcomingdiscs Dec 1, 2008. He works out of a home theater he calls The Reel World. Favorite films: The Godfather, The Godfather Part II, The Body Snatcher (Val Lewton film with Karloff and Lugosi, not the pod people film), Unforgiven, Gladiator, The Lion King, Jaws, Son Of Frankenstein, The Good, The Bad And The Ugly, and Monsters, Inc.
Barely Lethal (Blu-ray) I Love Lucy: The Ultimate Season 2 (Blu-ray)