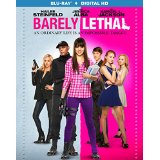 “Who would ever suspect a kid?”

When I glanced at the Blu-ray cover for Barely Lethal — with its groan-worthy pun of a title, girl power, and generous splashes of hot pink — I didn’t really expect it to be my thing. (Ok, fine…groan-worthy puns are *totally* my thing.) So while I may not be the intended audience for this independent action/comedy, I have to admit its charms snuck up on me the same way one of the film’s disarming young killers might catch a target by surprise.

“I never knew my parents. The only thing I ever knew was Prescott. It was a top-secret, government-run school that turned little girls into killing machines.”

The film opens with a montage showing us life at Prescott Academy, which is overseen by perfectly-named taskmaster Hardman (Samuel L. Jackson). The current star student is No. 83 (Hailee Steinfeld), much to the chagrin of envious rival No. 84 (Sophie Turner). Although she excels as a Prescott student, 83 longs to experience life as a normal teenager. As a result, she buries herself in US Magazine and teen touchstones like Clueless, Beverly Hills 90210, and Mean Girls.

During a mission to capture a dangerous arms dealer (Jessica Alba…wait, what?!), 83 is separated from Hardman and presumed dead. Instead of reporting back to Prescott, she uses the opportunity to reinvent herself as a foreign exchange student named Megan Walsh. Megan is initially thrilled about enrolling in high school and living with her host family, which includes sarcastic teen Liz (Dove Cameron). But even before her Prescott past catches up with her, Megan quickly finds out that high school is her toughest mission yet.

The director here is Kyle Newman (Fanboys), who is working from a surprisingly biting script by John D’Arco. (A character refers to mono as “mouth AIDS”; fish-out-of-water Megan is described as suffering from “social herpes.”) Despite the little-girls-as-action-heroes concept, Barely Legal is most definitely not aimed at children or family audiences. At its heart, this is a teen rom-com that indulges in all the accompanying tropes while occasionally turning them on their ear.

So we get the vacuous Dreamy Musician (Toby Sebastian) that infatuates Megan, even while it’s plainly obvious she belongs with nice-guy AV Geek Roger (Thomas Mann). On the other hand, I was impressed that the movie bothered to reveal there was more to the Loud-Mouthed Jerk who calls himself Gooch (Gabriel Basso). There are also inventive touches like Megan in a mascot costume fighting off a slew of attackers. 84 eventually turns up and adopts the name Heather; she and Megan take the idea of “fighting over the same guy” to a new level during homecoming.

The movie focuses so heavily on the “high school is hell” angle that it leaves some potentially interesting spy stuff on the table. After all, these girls are intentionally stripped of their identities while they’re still very young and pliable. They also make for effective killers because their targets will always underestimate them. The closest we get are some chuckle-worthy glimpses of little girls rappelling down the side of a wall, and an early montage of 83 taking down anonymous a few anonymous targets.

Fortunately, the proceedings here are buoyed throughout by appealing performances. Steinfeld, already an Oscar nominee for her feisty work in the True Grit remake, is likable and equally adept at comedy and kicking butt. The fact that she’s 18 doesn’t hurt her believability as a teen either. The same goes for Cameron and Turner, who are both 19. (It’s especially nice to see Turner take a break from period garb on Game of Thrones.) The biggest names in the cast are definitely Jackson and Alba. Jackson shows a deft comedic touch during his handful of scenes (think of Hardman as a playful poke in Nick Fury’s eye), and Alba seems more alive playing a baddie than in any of her blandly heroic performances combined. The movie also sprinkles in comedic actors (Rachael Harris, Rob Huebel, Dan Fogler) in bit parts; they’re all pretty much one-note performances, but at least those notes are generally funny.

It still feels like we didn’t spend enough time at Prescott, even though I enjoyed the idea of a teen taking a crash course in normalcy. (Basically, the inverse of the spy hijinks in a fun flick like Kingsman.) Although all the high school tropes are overly familiar — and have been done much better in the movies Barely Legal idolizes — the performers and snappy direction inject life into this story about killer teenagers.

Barely Lethal is presented in an aspect ratio of 1.85:1. The 1080p image is arrived at with an AVC MPEG-4 codec at an average of 23 mbps. The visual presentation gets off to a promising start thanks to some vibrant, graphic-novel style opening credits sequence. And as promised by the loud Blu-ray cover, colors here do indeed pop. Unfortunately, this is otherwise a pretty standard contemporary HD presentation that consistently veers toward softness. The image is blemish-free, but the relative lack of sharpness is somewhat baffling (and doesn’t appear to be intentional).

The DTS-HD Master Audio 5.1 track is appropriately aggressive in presenting all aspects of the action. The movie’s opening theme song — “You Don’t Know Me” by The Rumor Mill — explodes through the speakers just as loudly as the actual explosions of violence. (Nothing too graphic, by the way; a high-speed car chase is as intense as things get.) The surround sound field is active and dynamic, with the sound of those cars zooming from one rear speaker to the other. There is also a solid sense of immersion, which is especially noticeable during scenes in the school cafeteria and auditorium. Even the subs thump to life during a house party scene.

Audio Commentary with director Kyle Newman and actors Dove Cameron and Thomas Mann: This track is a little light on production details, but heavy on anecdotes from the cast. It seems like there was an especially tight camaraderie among the younger actors, who worked in some real-life revelry while filming the party scenes. Newman also points out a few quick cameos (his real-life wife Jaime King, Topher Grace). I would’ve liked to have heard more about making an action/comedy on a modest budget, but what this track lacks in information it makes up for in fun.

Back to School: On the Set of Barely Lethal: (10:45) We learn the production filmed at an actual Atlanta high school — as opposed to a bunch of soundstages — and the cast and crew pay tribute to past high school films. (Fogler, Harris, and producer Brett Ratner recount their own real-life high school experiences.)

Deleted Scenes: (6:49) These seven chapters are mostly extended versions of existing material from the film. This stuff ranges from expendable to indulgent. (There’s more of Fogler’s creepy teacher fawning over dreamy musician Cash.)

I honestly didn’t expect to enjoy Barely Lethal as much as I did.

Sure, the movie hews very closely to the teen comedy playbook, but there are enough likable actors and action/comedy tweaks to keep things lively. Barely Lethal isn’t a great teen comedy or a terrific spy yarn, but it’s a pretty entertaining melding of both.