Posted in: Disc Reviews by Gino Sassani on August 4th, 2015 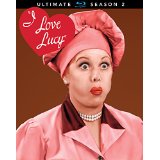 I Love Lucy changed the fledgling television industry in the 1950’s. This was a time when network television was less than a decade old. Most folks had never heard of television just 15 years earlier. I Love Lucy defined the concept of a sitcom. The show was driven by the very strong personalities of the cast. Desi Arnaz was considered a charismatic Latin lover by American women. Lucy played the perfect foil and found a mountain of gold to mine in strong physical comedy. So many modern shows owe their roots to this classic that it would be impossible to mention them all here. Now CBS and Paramount are bringing the show back in brand-new high-definition restored image that will delight even the pickiest fans of the show. We’ve now reached the second season of these efforts, and it is absolutely worth a look.

Even if you are not a particular fan of the show, it would be a mistake to dismiss the impact the series had both on the situation comedy and the television industry itself. The show’s pioneering use of the three-camera format and shooting on film allows the material to be in a position to be restored at all. That setup has remained a staple of the television comedy since that time. Desi was also a marketing genius who was the first to take advantage of the promotional value of putting the show’s name on everything from lunch boxes to sleepwear. It’s an innovation that is exaggerated in a Red Skelton skit provided in the extras here. Desi changed the way television crew did their jobs and created the modern production methods still used today.

The show would also be a springboard to other ventures for the couple. Mission Impossible and Star Trek fans certainly know the contributions their DesiLu studios created for more serious television. Both shows are enjoying enormous success in the franchise film market and serve as cash cows for Paramount today. Who knew Tom Cruise owed so much to a 1950’s sitcom? The truth is the couple ended up raking in far more money in the role of producers than they ever made as television or movie stars.

The show also set the template for a life in syndication. I Love Lucy was the first widely syndicated television show, and it found more success in those reruns than it did in its original airings. Those reruns still air today after nearly 70 years. If ever there was a vintage comedy that deserved this kind of restoration and high-definition treatment, it would surely have to be I Love Lucy.

The second season featured some of the most memorable moments both in I Love Lucy and television history. Job Switch is perhaps one of the most recognized episodes in television. We all remember Lucy and Ethel stuffing candy in their mouths as an assembly line moves the morsels past them faster than they can wrap them. It was part of a dare with the men that each could do the other’s job better. The story nuances might not be as well known, but try to find someone who hasn’t seen that clip.

Another milestone event occurred in the second season. Lucille Ball was pregnant with Desi Arnaz, Jr. The show decided to use the real-life event and bring young Ricky into the lives of the Ricardos. That became the most watched event of its era. Over 72% of the televisions in America and 92% of the viewing audience tuned in to see the arrival of Little Ricky. The actual birth happened the day the episode first aired. It was a national sensation. The event made the front page of both TV Guide and Newsweek. Lucy and Desi had conquered both the entertainment and reality worlds in one event. It’s all here in high definition with this release. The show also predicted accurately the sex of Lucille Ball’s baby, as Little Ricky arrived first. This was in the days before ultrasound would have made sure the script was accurate. The couple turned the event into an extravaganza of publicity for the show and for themselves. This was the very first “event” episode in television history.

The shows have been available in many incarnations over the last 60+ years. They still run on television. There are DVD season and compilation sets. There are videotapes, and I’m sure many fans have had their own private copies for decades. Why buy them again now? Because I promise you that you don’t have anything like these Blu-ray copies.

Each episode is presented in its original broadcast full frame aspect ratio. The 1080p image is arrived at with an AVC MPEG-4 codec. Fans will find nothing to dislike about this remarkable high-definition image presentation. The prints have bee wonderfully restored with almost no dirt or score artifacts. Contrast allows for a crisp black & white presentation. There’s detail you have not seen ever before. I can see the edge lines on Lucy’s lipstick as well as flaws in the stage that broadcast audiences would never have spied. This is a rich presentation that shows tons of work done with careful attention to the details.

The DTS-HD Master Audio 2.0 is exactly what it should be. It reproduces the mono original tracks by just adding a little depth. Gone is any tape hiss or high frequency splatter. Dialog comes through just as it was intended.

There are 5 discs here, and each is loaded with extras. Most of them are pretty much the same kinds of things on each disc. You have audio-only features of Lucy’s radio show and an audio book about the series. There are text-based features on guest stars along with production notes and galleries. You can watch each episode in its original form. That is, without the heart opening, which was added in syndication, and the Phillip Morris spots. They were the main sponsor of the show, and their cigarettes were featured prominently in many episodes. Tobacco companies were the main sponsors of most of the television shows of the 50’s and 60’s. No wonder that so many of these stars died of lung cancer. The discs also feature flashback promo segments, flubs and network promos.

There are a few standout features:

You get a colorized version of Job Switch that was broadcast as a holiday special in December of 2014.

I Love Lucy Movie: This was a compilation of three episodes that were intended to play in theaters. The studio asked them to delay the release, and it sat in the can for 50 years. It was finally released on home video in 2001.

Most of these plots are pretty familiar to us by now. I can’t count how many episodes are based on classic misunderstandings or one of the couple trying to teach the other a lesson. Lucy spends many episodes trying to break into Ricky’s act at the club. Watching them all in such a short span makes one notice the repeated themes of the series. The truth is nothing has changed. Watch 10 seasons of Friends, and you’ll find many of the same themes repeated often. Worse yet, more than a few feature these same plot ideas mentioned here from 70 years earlier. Lucy and Ricky might not have ever learned their lessons. But CBS has learned them well. Just as they’ve done with Star Trek, we’re seeing considerable effort in bringing these shows into the 21st century. You might call it amazing. “What’s so amazing about that? You knew it would happen sooner or later!”

Gino Sassani is a member of the Southeastern Film Critic's Association (SEFCA). He is a film and television critic based in Tampa, Florida. He's also the Senior Editor here at Upcomingdiscs. Gino started reviewing films in the early 1990's as a segment of his local television show Focus. He's an award-winning recording artist for Omega Records. Gino is currently working on his 8th album Merchants & Mercenaries. Gino took over Upcomingdiscs Dec 1, 2008. He works out of a home theater he calls The Reel World. Favorite films: The Godfather, The Godfather Part II, The Body Snatcher (Val Lewton film with Karloff and Lugosi, not the pod people film), Unforgiven, Gladiator, The Lion King, Jaws, Son Of Frankenstein, The Good, The Bad And The Ugly, and Monsters, Inc.
The Man from U.N.C.L.E: Season 1 Blackbird