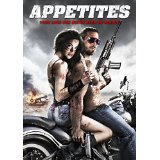 I am a huge fan of the horror genre. Very rarely will I turn a horror film down, no matter how bad it is. This commitment begs the question: what exactly makes a horror film bad? (Although my aim for that question is to be rhetorical, I hope to answer that question through this review of Appetites.) As a horror fan, you typically read the cover of the DVD and already know what you are getting into (for the most part). You decide to lend your time to the film, knowing full well that the odds of watching the next Halloween or The Shining are not in your favor. Regardless, you pop the disc into the player and begin your journey into the unknown, hoping to watch something worth your time. Enter Appetites.

The run-of-the-mill plot summaries of Appetites read as follows:

Daisy (Lauren Parkinson) and Bubba (Scott Barrows) are siblings living in an undisclosed southern town. They enjoy hunting for food, cleaning their prey, and indulging in their home-cooked meals. Interestingly enough, they have an insatiable taste for human flesh. One day, serial killer, John Doe (Bret Roberts), rolls into town and discovers Daisy has “what it takes” to be his lover.

While that doesn’t spoil much, you already get a sense of where this film is coming from. I’d say it sounds like a combination of The Texas Chainsaw Massacre and Natural Born Killers. However, what that synopsis does not highlight is the film’s brilliant concept. What I like about this film is the fact that it’s a coming-of-age story for Daisy. Having been sheltered her entire life, Daisy is ready and waiting to explore her body with a mate. The young cannibalistic serial killer finds this mate in a mysterious, charming, and ultimately, more experienced serial killer. This concept felt new and refreshing to me, and this is why the film really let me down.

After reading the DVD cover, I had no clue it would be a coming-of-age story. I just thought it would be another schlocky horror film. And for the first 10-15 minutes, that’s exactly what it is. However, after about 30 minutes, you begin to fully grasp the film’s purpose through the well-placed signs of a coming-of-age story, which is why I really can’t get behind this film. I wanted to enjoy it, because I think the concept is fantastic and intriguing. I couldn’t enjoy it, because I had to sit through a slow-paced story, large doses of bad acting/overacting, and really confusing tonal shifts (between comedy, drama, and horror).

I won’t continue to harp on the acting, because you can clearly see the effort put into the characters, they just really miss their mark a lot of the time. What I can’t get over is the film’s pacing. As interesting as the concept is, it just moves slowly. The first 20 or so minutes are predominantly sex scenes and stabbing scenes; then it shifts to the aforementioned love-interest plot line, complete with extensive romantic dialog. Then it just drags. Shots linger, unnecessary scenes are included in the timeline, and basically everything that could possibly try your patience eventually does.

I believe if they had taken the original concept more seriously, this would have been a really great movie. John Doe had a believable motive for taking the lives of his victims, but he spends the entire film singing as if he were in a music video. One step forward, two steps back. Daisy sets up pretty awesome traps for her victims, but she accidentally kills the detective and apologizes to him while he’s dying. Spending less time with the scenes they were playing for laughs and more time with the rather dark and demented coming-of-age tale would have been powerful, possibly enough to surpass Carrie. Unfortunately, the film is filled with silly premises that really just don’t win me over. There is a time and a place for comedy, and it is definitely not in Appetites.

In an age of Sharknado or Zombeavers, horror films are being catered to specific horror audiences: audiences who don’t take the genre very seriously, so they love how over-the-top it has become. I believe that this new trend has prompted filmmakers to begin cutting corners in their craft, resulting in “cheap shots” in an effort to attract that over-the-top thrill-seeking audience. Perhaps if this film was made a decade prior, it would have been a hidden gem that horror cinephiles would really appreciate.