Posted in: Disc Reviews by Gino Sassani on August 5th, 2015 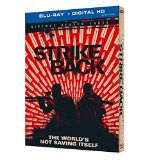 Strike Back follows the exploits of an elite and secret British military team called Section 20. On paper they do not exist, but they’ve got all the best new high-tech toys, and they’re going to need every one of them. They’re going after the top terrorist threats. They combine the intelligence-gathering network of a CIA-type organization with the precision strike force impact of a top Navy Seals team.

The two main members of the team are Michael Stonebridge, played by Philip Winchester. He’s the veteran of the team and a former member of the British military community. Damien Scott was the newcomer in the first season. He was a damaged military guy who was a bit disgraced and run out. Recruited by Section 20, he has managed to prove himself and is at the top of his game. He’s played by Sullivan Stapleton. The two actors appear to have become fast buddies, as evidenced by their playful banter in the behind-the-scenes shorts. This has translated to one of the show’s greatest strengths on the screen. They work quite well together and are a force to be reckoned with in more ways than their characters’ lethal abilities.

The rest of the characters on this show come and go. Having your name in the opening credits is no promise that you’ll survive the season. One of the biggest losses this season is Rhona Mitra as Maj. Rachel Dalton. She was one of the best supporting characters and actors on the series. Her remaining episodes only prove that very point. She’s had to witness the execution of Liam Baxter in the field, providing an exit to Liam Garrigan as well. The images haunt her, driving her to booze and drugs and making very bad decisions. If she has to go, this arc provides a nice exit with a chance to show off those acting chops on the way out. These activities also provide the thrust for this season’s major story arc.

A central character to this season is Leo Kamali, played by Zubin Varla. He’s going to be one of those question marks throughout. We never know for sure until the end which side he’s working for. He becomes an integral part of Stonebridge and Scott’s operations as does his daughter. Varla does a great job here of keeping us guessing. I can’t tell you how it turns out (OK, I could, but I’m not going to), but thanks to some clever storytelling and a solid performance you’ll go back and forth with your own opinions several times before all is revealed.

Replacing Dalton in command is Robson Green as Col. Philip Locke. He’s not as strong a character as we’ve had in this position. Actually, he’s a bit counter to how we normally get to know characters on Strike Back. He’s a bit of a slow burn, and we really learn about him slowly in pieces.

Keeping in the tradition of strong female roles, the third season gives us a few more. Czech actress Tereza Srbova provides a lot of action as a Russian operative who also has uncertain alliances. She ends up helping Damien and Michael break out of a Russian prison where they are undercover to stop a computer whiz from breaking NATO’s computer firewalls for this year’s big bad. Another is Catherine Walker as the IRA leader McKenna. This is one cold-blooded chick, and she’s the most fascinating of this year’s bad guys. Milauna Jackson comes onboard as DEA Agent Kim Martinez. She gets the boys out of a tough spot in Columbia, and she and her team work with Section 20 for the rest of the season. Lynne Renee returns for an intense few episodes as Rebecca. Of course, Michelle Lukes returns as Julia Richmond. She seems to be the only female character who has survived since the beginning of the series.

In case you haven’t guessed from my character descriptions, the team has a few organizations after them this season. The IRA has teamed up with the terrorists, and a Russian mobster wants revenge because the boys killed his son. It doesn’t help that the Russian prison they go undercover in is a private facility owned by said Russian mobster. They have to finish their mission and get out before he knows they are there. There’s no shortage of bad guys with evil designs. It’s all leading to a race against the clock to stop a bio-weapon from killing millions.

The show continues to take a global tour. We start in Columbia for several episodes. Then it’s on to Budapest. From there it’s Germany to stop the release of a deadly virus, with a detour to that Russian prison.

The series is quite compelling. On the surface it appears to be one of many recent shows that deal with tracking down terrorists. Since 9-11 there’s little doubt that the radical extremists have become Hollywood’s favorite bad guys. The field has become so crowded between feature films and television shows that it’s difficult for any one show to set itself apart from the pack. I have to say that Strike Back does just that. The show strikes just the right balance between action and drama. The characters become rounded out in a hurry, and we become attached to them rather quickly. The truth is, we have to. The series has a history of introducing us to very strong female characters, particularly. Unfortunately, they kill them off almost as quickly. We lose three such characters in the third season alone. The action doesn’t take us so over the top that our characters appear to be practically indestructible. They don’t always win the battle, and the scars are part of the process. These guys don’t have any superpowers; they’re just very good at what they do. It actually appears they’ve made an effort to get these characters injured this season. Michael is exposed to a chemical weapon and suffers near fatal nerve damage. At first he attempts to hide the condition, but it causes him to question himself when he has to take that skilled shot. It almost costs the lives of his comrades.

There’s some real talent in the cinematography and editing. You get the sense that you’re boots-on-the-ground during the action. The camera takes you to eye level, and the production values are high enough to sell it all. Need a breath? You get one when the characters do, and the show can actually feel a bit fatiguing at times. It’s obvious how much more an organization like Cinemax can bring to this kind of series that network productions just can’t match. You couldn’t do this on NBC or the others, and it would be best they not even try. The closest I’ve seen to this kind of show was The Unit, another very good show that did appear on network television. But even The Unit couldn’t touch this kind of action. Fans of that show will particularly love this one. It’s what that show would’ve been with this kind of a budget. This season returns all of those elements you’ve come to expect from Strike Back. The bullets fly and cars get chased. It’s non-stop action few television shows could hope to match.

Commentaries and short behind the scenes features for each episode (about 2-3 minutes each).

After three seasons of Strike Back, Cinemax is solidly in the game of original cable television programming. It’s not really a first step, since the powers that be at Cinemax are part of the HBO family of premium cable channels, and HBO’s been in this game for a long time. They pretty much started the whole thing over 20 years ago. HBO is also distributing this home video version of Cinemax’s first series, and it’s an explosive series, to be sure. Just remember to duck. “You’re going to be dodging more than bullets.”

Gino Sassani is a member of the Southeastern Film Critic's Association (SEFCA). He is a film and television critic based in Tampa, Florida. He's also the Senior Editor here at Upcomingdiscs. Gino started reviewing films in the early 1990's as a segment of his local television show Focus. He's an award-winning recording artist for Omega Records. Gino is currently working on his 8th album Merchants & Mercenaries. Gino took over Upcomingdiscs Dec 1, 2008. He works out of a home theater he calls The Reel World. Favorite films: The Godfather, The Godfather Part II, The Body Snatcher (Val Lewton film with Karloff and Lugosi, not the pod people film), Unforgiven, Gladiator, The Lion King, Jaws, Son Of Frankenstein, The Good, The Bad And The Ugly, and Monsters, Inc.
The Affair: Season One Appetites