Posted in: No Huddle by Jeremy Butler on August 7th, 2015 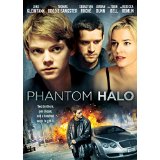 Petty crime and literature: makes you wonder how often the two coexist. In the case of Phantom Halo, the two coexist quite often and very successfully. The introduction of the literature through the guise of street theater sets the stage for the criminal activity and provides elegance to what would possible been a dull story. However, in my opinion, the two need one another to provide a compelling story. Though admittedly there are times when one aspect seems farfetched or pulls focus from the other, in the long run it is these two themes together that make the overall film exceptional.

Beckett and Samuel are brothers and petty thieves; Samuel is the distraction, acting as a street performer and delivering famous monologues that captivate an unsuspecting audience while Beckett moves within the crowd and pilfers whatever he can. Now, I know what you are thinking: these don’t’ seem like good people; however, this is simply what is required of these two characters to survive. Their father, a drunk and a degenerate gambler, rules over the two despite the fact that he provides no stability for them, forcing them to commit these crimes in order to keep a roof over their head while he takes whatever they earn (even resorting to stealing money that they attempt to save) to maintain his own habits.

Beckett lives in the reality of their situation, while Samuel dreams of a grander life, preferring to indulge in reading the latest copies of Phantom Halo, a popular graphic novel series. Beckett, however, is forced to put the well-being of the family on his own shoulders despite only being slightly older than Samuel. He cannot count on his father, who frankly is an anchor around the two brothers’ necks, dragging them down. Beckett eventually runs into an old acquaintance from a past stint in juvenile hall who has a scam going that has the potential to turn the tide for Beckett’s situation: counterfeit.

First thing I want to commend about this movie is the casting. This was one of the best casts that I’ve seen recently, especially for a movie that from what I’ve seen did not have a whole of commercial press. Now, there were times when the characters pulled focus from one another, but fortunately the way the characters meshed and their overall dynamic overrode those instances. The key relationship in the film is the two brothers, Beckett and Samuel. For most of the film the relationship was strained, and the two spent a majority of the time apart, the rare times when they are together produces emotional arches. Such is the cause when Beckett recites a Shakespeare monologue to Samuel after he goes off script. This marked my favorite scene of the film; there was elegance in this monologue and its delivery, allowing the words to reveal what both characters were feeling in that moment. I rewatched this scene several times; this is how much I loved the scene. Moving on, as I state, all the characters fit their roles quite well including Sebastian Roche, who plays the brother’s degenerate father. Not to typecast, but he embodied all aspects of the role, making me feel genuine distaste for him every time he was on the screen.

There was one character that lost traction in the film’s climax, and that was the antagonist Roman, played by Gbenga Akinnagbe. In the beginning he gave off subtle intimidation that I really liked, but at the film’s climax that subtlety disappeared and he turned into the aggressor, which just didn’t match the established character. As far as the actor’s range, I have seen from his previous work that he has the ability to play both kinds of characters; however, to change how the character operates mid-movie causes confusion. In my opinion it would have been best to keep the character the way he was in the beginning; subtlety is an art, and it builds better suspense.

Story-wise, I think the only thing I would change or better said enhance, would be Samuel’s story. I just would have like to see a bit more of him, as a most of the story is focused on Beckett; the primary focus being on Beckett is understandable, as most of the struggle and weight of the situation stems from his attempt to find a way to better the life for his brother and himself, not to mention the romantic arch is in his storyline. Then again, I could have lived without the romance when I think about it. It just didn’t really add anything to the story in my opinion; it could have been done away with without causing any real damage.

In conclusion, this was one of the better films that I have seen this year. I absolutely encourage people to give it a watch and play special attention to the monologue scene I mentioned earlier. See if it provokes the same response in you that it did in me. Maybe it will, maybe it won’t, but one way or another I pretty sure that you will find yourself affected by it.

Jeremy Butler is a film school graduate of the International Academy of Design and Technology. He is been writing for Upcomingdiscs since 2012; however, movies have played a big part of his life for much longer. Favorite genres include horror, science fiction/fantasy, and comedy. Favorite movies are V for Vendetta, Boondocks Saints, Kiss Kiss Bang Bang, and The Godfather.
Appetites Child 44 (Blu-ray)