When the Checks Stop Coming In 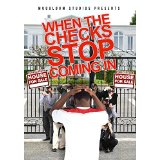 In a relatively short amount of time, Moguldom Studios has built up a diverse stable of bite-size documentaries that focus on contemporary African American life. Some would say these independent “docutainment” films are limiting themselves to a niche audience, but I appreciate them for tackling well-worn topics from a different cultural perspective. When the Checks Stop Coming In is easily the best out of the recent trio of Moguldom offerings I’ve gotten a chance to review. The film understands that going broke is not a problem unique to the African American community, but is insightful enough to show some of the factors that uniquely affect that segment of the population.

When the Checks Stop Coming In focuses on black celebrities while conceding that plenty of rich famous white people (Gary Busey, Tori Spelling, The Osbournes) squander their fortunes. We get some quick clips and a rundown of athletes (Dennis Rodman, Warren Sapp, Allen Iverson) and entertainers (50 Cent, Lionel Ritchie, MC Hammer) whose financial troubles have been well documented. The doc spends a little extra time on a few of those more famous names, including soundbites from singer Toni Braxton (apparently the various people who tended to her were better compensated) former NBA star Antoine Walker (he advises active athletes to wait until they’re retired or not as busy to invest money), and Mike Tyson (if he ever shares the same space with Don King again, I don’t imagine it would end well for Don King).

The real stars, however, are infinitely well known. Lee Jenkins is a pastor and former footballer who preaches fiscal responsibility. He makes the case that the African American community is historically more interested in financial survival than financial investment. When the Checks Stop Coming In connects that sort of short-sighted thinking to a slave mentality that makes black people who have never had much money more likely to spend rather than save when they are flush with cash. Jenkins makes the more salient point that even the most high-profile African Americans didn’t start accumulating their wealth until the last 50 years or so. As a result, it will still take some time before a generation of black people become accustomed to the idea of generating wealth *and* passing it down to future generations. (Magic Johnson is mentioned as a multi-faced mogul worth emulating.)

The other standout is former Phoenix/Arizona Cardinals NFLer Dexter Davis, who went from earning an NFL paycheck to collecting food stamps. (The doc notes that 78 percent of NFL players are either broke or in financial stress within two years of retirement, while 60 percent of NBA players are broke within five years of retirement.) Davis describes how his NFL paychecks went directly to his agent Tank Black, who turned around and gave Davis an allowance. Black defrauded a number of athletes, and the movie explores some of the pitfalls suddenly-rich black celebrities face in terms of who to trust with their money. Those pitfalls include having relatively little experience or a smaller frame of reference when it comes to employing financial advisors, or simply trusting an unqualified friend or family member out of a sense of loyalty.

The film makes a somewhat weaker case that spending big is a side effect of a black culture that worships luxury and excess. Unlike the generational points the film makes about fiscal irresponsibility, When the Checks Stop Coming In doesn’t do much to support those claims beyond show random clips of celebs like Diddy and Floyd Mayweather living it up. At least we get some amusing, tragicomic footage of a $100 bill being set on fire and a different handful of money being literally flushed down the toilet.

Unlike the other Moguldom docs I’ve seen, When the Checks Stop Coming In mostly eschews the comedy and sticks to the point. (The closest we get to funny business are clips featuring comics like Chris Rock, Kevin Hart, and Dave Chappelle doing bits on the subject of money.) It’s a savvy decision that makes for a more effective film.

Knifed Up: The Evolution of Cosmetic Surgery It Happened Here