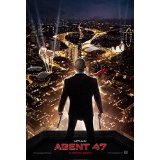 Well, it is definitely more high-tech than the 2007 version, but is that necessarily a good thing? That’s what you are here to find out in this reboot to the popular video game of the same name (minus the Agent 47 part, that is). Rupert Friend is Agent 47 in this updated version, and I will say that despite my initial upset feelings about the recasting of the character, he does an excellent job as the highly motivated and proficient assassin. As far as reinvention goes, I was pleased with this despite it being theoretically ridiculous in some areas, but hey, isn’t that what fantasy is anyway?

A narrated introduction at the beginning of the film provides much of the backstory, thereby answering many questions of how this one plays into the previous film. Which is to say, not at all. In the backstory we learn 47 is a genetically-engineered human being designed to be the perfect assassin. He is faster, smarter, and can choose not to feel pain or empathy, attributes that make him a valuable commodity among the elite and government organizations. That is until the program’s lead scientist (Ciaran Hinds) after having a crisis of conscience abandons the program and disappears, taking the knowledge of how to build an “Agent” with him. Desperate to possess the knowledge, an organization known as “The Syndicate” launches a global search to find the doctor.

For years they are unsuccessful until they discover a means to finding the doctor: his daughter, Katia (Hannah Ware). Katia lives as a ghost, moving from place to place, all the while driven by an unexplainable need to find the father who abandoned her when she was very young. Learning of the Syndicate’s plans, certain forces that do not wish the power to create Agents to fall into their hands commission Agent 47 (Rupert Friend) with preventing that from happening.

Before long, Katia is approached by John Smith (Zachary Quinto), who informs her that she is the key to finding her father and that both sides are coming after her. Unsure where to turn and who to trust, Katia will discover things about the situation as well as herself that will forever change her.

Firstly, I’m going to say that the previews for the film kind of ruined the midpoint twist of the movie. Anyone who has seen the trailer knows what I’m talking about. That reveal somewhat makes much of what happens in the beginning of the movie very predictable. Maybe not the specifics, but where the overall story was heading. That said, the specifics make up for it a bit, as there are a lot of things going on that held my interest. As I said before, though theoretically ridiculous in some area,s some of the things happening would be really cool if they were possible. I want to go into detail; however, that would ruin the experience; needless to say you will be able to pick out the parts I’m talking about.

Let’s talk performances, starting with the most important one of the movie. (Can you guess which one I mean?) Before this film I knew very little about Friend; granted, I had heard his name here and there, but his prowess as an actor I was ignorant to. Within the confines of this movie, I found him to be a suitable candidate for the character. Diehard fans will be the judge of how his performance measures with the game character, but to me, I thought he was great. He was controlled and methodical, which made the killer aspect of his character believable. However, he also perfectly balanced emotional vulnerability of the character; showing that he did care to an extent without displaying a downpour of emotion. He was everything I expected 47 to be.

Moving on, there are two other actors I’m going to mention, one in a good light and one in a not so good light. Let’s start with the not so good, Quinto. I just did not find his character to be interesting, and I did not find his performance compelling. He was just very generic, and there was not a whole lot of emotion coming off his character; he didn’t seem like he really connected with the role. Now on to Ware. Like Friend I knew very little about her, but after this movie, I want to know a lot more. She just has a captivating look that makes her very intriguing. Although her characters motivations turned out to be slightly less interesting than I had thought, Ware still brought the character to life and kept her from becoming stale. Her abilities are still a bit vexing to me, but I understood them for the most part.

In conclusion this is a worthwhile see if you love action. Whether or not the lovers of the game franchise will be satisfied with this reproduction, I cannot say for sure. However, I will say that if not exactly like the game, it still does it justice in my opinion. I don’t know if it will be available in 3D, but it did seem like some of the action sequences were built for that format. Also, diehard fans, make sure you don’t leave too hastily; who knows what you might miss.

Jeremy Butler is a film school graduate of the International Academy of Design and Technology. He is been writing for Upcomingdiscs since 2012; however, movies have played a big part of his life for much longer. Favorite genres include horror, science fiction/fantasy, and comedy. Favorite movies are V for Vendetta, Boondocks Saints, Kiss Kiss Bang Bang, and The Godfather.
NCIS: Los Angeles: Season 6 Easy Money / Men at Work (Blu-ray)