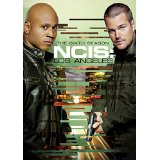 NCIS has become the number-one-rated television show in the world. It might stand alone in that distinction, but it certainly doesn’t stand alone. Last season saw a new spin-off that took us to New Orleans. It’s hard to believe that it was six years ago now that NCIS: Los Angeles took to the West Coast streets and developed its own brand of Naval criminal justice. It’s a franchise that rivals Law & Order or CSI in its ability to stretch out and continue to build a fan base. It’s part of a powerhouse lineup at CBS that has plenty of shows going double digits in seasons. I suspect that this one will be around long enough to join that group, if this season is any indication.

The show differs in several ways from NCIS or JAG. While LA is still a military show, that angle is downplayed here. The atmosphere for the team is more civilian-looking all the way around. There are seldom folks walking around in uniforms. The operations utilize more of the standard surveillance and undercover work. In the back-door pilot, the leader of the group was an agent who had history with Gibbs. Her name was Macy, and she was played by CSI alum Louise Lombard, who was gone when the series premiered in its own right. Later we are told she was killed. There’s a lot more street work to be found here. That means car chases and lots of shootouts. The cases often deal with terrorists, so these guys break a lot of the rules. They don’t let any silly Constitution stand in their way.

The role of head honcho went to Linda Hunt as Hetty. You might remember her as one of the prominent judges from The Practice. She plays a character with a rich back story. She appears to have once been a Hollywood costume designer and has plenty of stories about the big celebrities she knew, and hints at having slept with. She’s a strong mother hen for the group, both nurturing and demanding. The lead undercover officer is Callen, played by former Batman sidekick Robin, Chris O’Donnell. He doesn’t know his first name, only that it starts with a G. He’s a little bit Jason Bourne. He knows little of his own past but has those mad instincts and ability to think on his feet. He was orphaned and has some security issues. He’s a natural undercover with great instincts that allow him to blend into any situation. His partner is Sam Hanna, played by rapper LL Cool J. He’s a former Navy Seal with the brains to go with all of that bulk. The team also includes Kensi Bly, played by Daniela Ruah, who was born in the US but spent most of her acting career on Portuguese television shows. She’s the prerequisite supermodel that it seems every cop show has to have. Fortunately, she also has solid acting chops. The character is the CSI-styled forensic expert on the team. She’s the one who combs the crime scenes for those hidden clues. Her partner and now love interest is Marty Deeks, played by Eric Christian Olsen. The two have better chemistry than Kensi had with Nate. There’s the expected sexual tension and a lot of banter that keeps the partnership interesting. Eric Beal, played by Barrett Foa, is the tech guy of the group. He does all of that computer hacking that every show does these days. He also has a partner of sorts. Nell Jones is played by Renee Felice Smith. She’s a bright young rising star who has a lot of the same tech knowledge that Eric has.

The season begins with a resolution of last year’s cliffhanger. Callen and Sam are trapped in a submarine that has been sent to collide with an aircraft carrier. It’s not just the lives of our heroes at stake here, to be sure. Look for an explosive start to the season that doesn’t really slow down until it’s over. It all ends with the team in Russia and in trouble again.

It’s not just the explosive action that defines this show. Like the original series, the characters are everything. Each of them gets to have their moments in the spotlight that will challenge and change them as the season progresses. For Hetty it’s all just beginning when the feds put her under investigation. And it’s not just Hetty. The DOJ sends their agents to scrutinize the entire team. This is not the kind of operation that you can put under a microscope. This leads to one of the show’s craziest moments as Nell goes undercover as Hetty. Watching her in the wig and doing the impersonation is going to be a golden moment for the fans, to be sure. This whole story plays out for several episodes, and, of course, the team is going to break whatever rules they need to in order to protect their matriarch.

Hetty is not the only team member who will need protection from the law. Sam finds himself under arrest for a murder he didn’t commit. Again the team will do everything it can to protect its own. Sam also gets a visit from a son he didn’t know he had. It’s a great opportunity for the show to reveal more about his life. Sam also has to deal with being a father to a young girl. Sam also gets shot and kidnapped this season.

Of course, the big story of season six for many will be that Kensi and Deeks finally decide to have a relationship in the opening. It’s at least an open secret to their co-workers. I suppose fans are excited about this development. I have to admit I wasn’t. I thought their chemistry was much better as the flirty kind of tension it had been for the last couple of years. I suspect I’m in the minority on this one. It’s how I see it.

For Kensi it’s a bit of an emotional rollercoaster as she attempts to deal with her experiences in Afghanistan last season. This is some of the best work for actress Daniela Ruah. It’s a moving episode that ranks as some of the best performance delivery in the show’s six years. The character has likely evolved the most. She’s tougher and more aggressive, and it does change her dynamic with the rest of the characters on the show. Like most personal evolutions there is good and bad here, and both character and actress are doing a wonderful job of trying to find that balance.

Callen gets a more steady romance this season in the form of Joelle, played by Elizabeth Bogush. It’s a sign that he’s feeling just a little more secure. I like that they took a little bit of a break last year in the endless drama of his past. It really has allowed the character to settle a little, and when they pick up some of those pieces again this year, it doesn’t feel so weighty. Joelle adds some depth to Callen and the show. She turns out to be a witness in a case, and Callen must protect her.

The show does a Die Hard imitation with Callen in the Bruce Willis role, and we get to see a cyber-thieves episode that uses a puppet playhouse for their operations center. It leads to some bizarre moments, to be sure. Deeks is under investigation which appears to be a common theme this season. Granger gets hurt badly in a car crash, and Erik gets to play rough for a change, while Nell deals with having to kill someone for the first time.

One of the oddest moments in the season does go back to Callen’s past. We get to see how he first met Hetty. Now, this series has amazing production values. But they really dropped the ball on using makeup and such to take 30 years off Hetty’s age. The result is rather hideous. I was dejected to learn in the bonus features how proud they were and that we might possibly see this again. De-aging can be tricky. The Michael Douglas look in Ant Man is the best job I’ve ever seen. This is one of the worst.

Speaking of extras, you get the traditional half-hour season summary and gag reel. There’s a small feature on the Die Hard episode. There are also short features on the puppet theatre, making Hetty younger and costumes. You get 24 episodes on six discs. The show continues to improve, and you’re not going to want to miss this season out from CBS. While I still like the original NCIS a bit more, “This is one cat you don’t put in a bag.”

Gino Sassani is a member of the Southeastern Film Critic's Association (SEFCA). He is a film and television critic based in Tampa, Florida. He's also the Senior Editor here at Upcomingdiscs. Gino started reviewing films in the early 1990's as a segment of his local television show Focus. He's an award-winning recording artist for Omega Records. Gino is currently working on his 8th album Merchants & Mercenaries. Gino took over Upcomingdiscs Dec 1, 2008. He works out of a home theater he calls The Reel World. Favorite films: The Godfather, The Godfather Part II, The Body Snatcher (Val Lewton film with Karloff and Lugosi, not the pod people film), Unforgiven, Gladiator, The Lion King, Jaws, Son Of Frankenstein, The Good, The Bad And The Ugly, and Monsters, Inc.
Secret Life of Marilyn Monroe Hitman: Agent 47