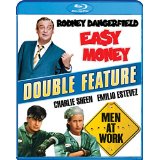 Today, the term “blue collar comedy” is likely to conjure images of rednecks and Larry the Cable Guy. However, this new double feature from Shout! Factory reminds us that wasn’t always the case. The heroes of Easy Money and Men at Work are, respectively, a sleazy children’s photographer and a pair of rebellious garbage men, so the label certainly applies. Let’s see how these two blue collar comedies hold up in their Blu-ray debuts.

Rodney Dangerfield stars as Monty Capuletti, a charismatic slob of a children’s photographer who loves to drink, smoke, and gamble. This puts him at odds with his rich, domineering mother-in-law Mrs. Monahan (Geraldine Fitzgerald), who never approved of Monty marrying her daughter Rose (Candy Azzara). When Monty and Rose are notified that Mrs. Monahan has died in a plane crash, they get an extra shock. The old lady has left Rose her $10 million fortune on one condition: Monty has to whip himself into shape and abstain from all his bad habits for an entire year. With support (sort of) from his best friend Nicky (Joe Pesci), Monty begrudgingly embarks on a healthier lifestyle. But is all that money really worth giving up who Monty really is?

Proving that good things really do come to those who wait, Easy Money was the first starring vehicle for Dangerfield, who was 62 when the movie came out. (His big-screen breakout had come three years earlier with his scene-stealing work in Caddyshack.) The film — with a script credited to Dangerfield and three other writers — is a pretty nice fit for the iconic comic’s sensibilities. Dangerfield is able to riff naturally during his scenes with children and Fitzgerald — my favorite zinger was Monty telling Mrs. Monahan, “you were the inspiration for twin beds” — and once the inheritance plot line kicks in, the put-upon comedian seamlessly goes into “No Respect” mode.

Unfortunately, the movie is much too scattered and unfocused. The plot — Monty and Rose being told of Mrs. Monahan’s death — doesn’t actually kick in until just before the 45-minute mark. (Easy Money clocks in at 96 minutes.) There’s also way too much time dedicated a subplot involving Monty’s daughter Allison (Jennifer Jason Leigh in one of her earlier roles) being nervous about consummating her marriage with new husband Julio (Taylor Negron). The irony of Monty strongly disapproving of Julio the same way Mrs. Monahan strongly disapproves of him seemed to be lost on everyone, although the movie did sneak in a few allusions to “Romeo and Juliet.” (Dangerfield’s name here is “Monty Capuletti” after all.)

It’s too bad because the moments that put Dangerfield front and center typically spark. The comedian finds a strong, funny groove with fellow fireplug Pesci, which makes up for Dangerfield’s total lack of chemistry with Azzara. (Not exactly a shocker that Dangerfield wasn’t a great romantic lead.) Jeffrey Jones — the go-to-stick in the mud during the 1980s — makes for a dandy, underused foil as the suck-up who stands to inherit Mrs. Monahan’s fortune is Monty fails. (This was three years before he switched to stalking Ferris Bueller.) There aren’t very many moments of inspired filmmaking here — the most notable exception is a quick bird’s eye view of Monty’s packed Staten Island backyard during a moment of post wedding revelry — and the movie’s looseness is only appealing when it centers around Dangerfield. Even then, a few sight gags — a wounded Monty hanging off a sling in a hospital bed — go on too long.

When you have a singular talent like the late great Dangerfield starring in your movie, the decision to feature him all the time should be Easy. Unfortunately, this movie misses the plot too often.

Meanwhile, Men at Work seems to be operating under the premise that good things happen in twos. Real-life brothers Charlie Sheen and Emilio Estevez star as Carl and James, a pair of California garbage collectors who don’t take their jobs very seriously. (James’s grand dream is for the duo to open up their own surf shop.) When they stumble upon a murder scheme involving a corrupt city councilman (Darrell Larson), his fetching campaign manager (Leslie Hope), and a capital-e Evil businessman (John Getz) dumping hazardous waste into the water, Carl and James have to dodge a pair of bickering hitmen, two bumbling bike cops, and a couple of prank-happy co-workers with a vendetta.

The movie was written and directed by Estevez (still riding his post-Brat Pack fame) and co-starred Sheen (a major movie star at the time after having made Platoon, Wall Street, Major League, and Eight Men Out). As a result, Men at Work seems like a goofy lark at best and a waste of time at worst. The siblings, however, have an easy, pleasing chemistry during their early scenes together, and Estevez directs the sequences when Carl and James go on their trash route together with casual swagger. (I was amused by the fact that Carl and James had a superior who disapproved of their methods, as if they were Riggs and Murtaugh.)

The direction — along with the rest of the movie — turns out to be a little too casual. The dead body that Carl and James are carting around, Weekend at Bernie’s-style, can clearly be seen blinking at one point. (The actor literally could not even play dead!) I didn’t so much mind that the story spiraled completely out of control to include a kidnapped pizza delivery guy and an unhinged Vietnam vet (played by Sheen’s Platoon co-star Keith David in a scene-stealing turn). I had a bigger problem with the movie’s laziness, sloppiness (if anyone is equipped to stash/dispose of a dead body, wouldn’t it be two garbage guys?), and the fact that Sheen and Estevez are mostly separated for the second half of the film. Sheen gets to do some limp, mistaken-identity flirting with Hope’s campaign manager, while Estevez is stuck playing frazzled straight man to David’s antics.

It’s too bad because the scenes with Sheen and Estevez and their dueling mullets playing off each other are the best thing about this movie. (David is a close second, Stewart Copeland’s moody, percussive score is third, and Getz’s overly cartoonish villain is…nowhere near the podium.) In other words, Men at Work is most fun when it looks like its two stars are hardly doing any.

Easy Money/Men at Work presents both films in an aspect ratio of 1.85:1. The 1080p image is arrived at with an AVC MPEG-4 codec at an average of 24 mbps. The two movies are presented on a single disc, but I imagine the somewhat underwhelming visual presentation has to do with their age rather than any compression-related issues. The disc makes a pretty poor impression early on as Easy Money suffers from some pretty obvious artifacting (particularly noticeable at the 0:38 mark) before thankfully settling into a largely blemish-free presentation. The slicker, cleaner Men at Work boasts the more impressive image, though that could also be attributed to better production values and the fact that it’s a newer film. Both films boast warm tones and a faithfully grainy texture. Men at Work additionally boasts pretty solid black levels, which are on display during the crazy night that serves as the film’s climax.

The DTS-HD Master Audio 2.0 track is essentially mono with the rears taking the night off and zero sub activity to speak of. The good news is that’s not exactly a major loss when you’re talking about two dialogue-focused comedies. The dialogue in Easy Money sounds a bit hollow at first, but the track overall is surprisingly potent. (The title theme song from Billy Joel rocks pretty hard both times it’s played.) Meanwhile, Men at Work probably suffers more from the lack of surround activity given its livelier action set pieces, but the track still does right by Copeland’s score and the dialogue. Overall, the tracks for both films are well balanced and serve their purpose.

Trailers for each film.

In terms of pure comedy, I’d give Easy Money the edge while Men at Work wins out as a more impressive audio/video presentation.

Although both films are flawed in their own right, I enjoyed temporarily traveling back to time when big stars weren’t afraid to make comedies that were dumb, goofy, or just downright weird. (It’s a nice antidote to the too-cool-for-school sensibility that seems to dominate today.) I recommend you pick these up if you’re already a fan of these movies — or, in Easy Money‘s case, if you’re a fan of Dangerfield — and are ok with only a modest A/V upgrade.