Posted in: No Huddle by Archive Authors on August 24th, 2015 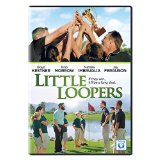 Meet Hutch, the once-great golfer, now mediocre golf course owner. Hutch has been down on his luck ever since failing to impress at the Pro Tour and now owns a mediocre golf course (or really bad golf course, depending on who you ask). Hutch has also been hitting the bottle since his life started on a downward spiral, and this drinking leads him to put a golf club into someone’s car window. The golf club incident leads him to serving time on community service, where he will try to teach a team of underprivileged children how to play golf. Some kids don’t have the means to golf in the areas where they live; some of the kids don’t have parents that understand their craving to play it. Whatever their reason, they are now stuck in Hutch’s hands…. for better or worse.

This story is like a mash-up of every coming-of-age sports movie wrapped into one. Almost like if you tried to take elements from Bad News Bears, Little Giants, and Like Mike to make a movie about golf. Don’t get me wrong. If it was my job to try to make golf interesting, I would surely be grasping at as many straws as I could….I would just try to write it well. Yes, sad to say, the story doesn’t hold up very well. We have five different personas for kids that seem to get washed over and only added in throughout the movie as an afterthought, to show us that these kids haven’t died. The coach’s arc seems to go by too quick for us to get a chance to know him. One minute he’s the bad guy; after an argument he’s a changed man. There is no real depth to that change, no fire that could ignite members of the audience to go out and change their life for the better. There is one good thing about this film’s story, and his name is Art. Not only do we get some real advice that kids can apply to their day to day lives, we also get some true emotion from that part of the story. Now if only they could have done that without sacrificing the rest of the film.

The cinematography ranges from “classic child movie” to poorly-produced, almost at random. The creators seemed to have one really good camera that they used for the bulk of the film, but every once in a while they had to switch to the other camera, the camera that they only need to take out when creators of under-produced movies think that the audience will be paying the least amount of attention. Even if we look away from the camera shots, I still have a problem with the way this was filmed as a whole. We are given a golf movie where every golf shot taken seems like it is going off screen, and completely out of the direction where people are looking. We have a creator that seemed to be IN LOVE with the idea of a golf movie having montages, since montages took up at least a third of the movie. We have shots that were misplaced throughout most of the movie, like a shot of the kids with icing from cupcakes on their face when these kids are allegedly teenagers. (I don’t know about you, but I figured out how to eat before I became a teenager.) It was just poor all around, to the point where you have to search for a good shot. I’m still searching.

I think the thing that made the creators of this movie skip over certain kids might have been the performances that were given. Almost all of the kids (besides Art) fell into the constant “kid trap” of overacting. “The funny kid” was way too out there with his performance, like he didn’t believe a word coming out of his mouth. “The smart kid” seemed to be reading the lines verbatim and with little to no selling factor in what she was saying. “The little foul-mouthed kid” was OK,but he was more like a hyperactive, low-rent Patrick Renner from The Sandlot. “The nice kid” was all but forgotten, so I couldn’t really get a read on him. Art (or “the Pro Kid”) was the only kid that seemed to genuinely care about his character; he tried to breathe some life into it where he could and did the best with the script in front of him. However, those are kids; the adults have no real excuse. Boyd Ketner was the headliner of this spectacular and seemed to only have one mode: pretentious. That is great for the first half of his character’s arc, but doesn’t fit the second half of his arc at all. I also felt bad for the one true actor in this, Natalie Imbruglia, for only being a love interest. This movie had a very strange cast, and one I hope to not see repeated in the coming years.

This movie was cute, but it isn’t going to tear me away from the classics I grew up with. I could tell they were on a tight budget, and I could tell that the people making this didn’t seem to care much. At the very least I can say that this movie will teach kids how to stand up to their parents.